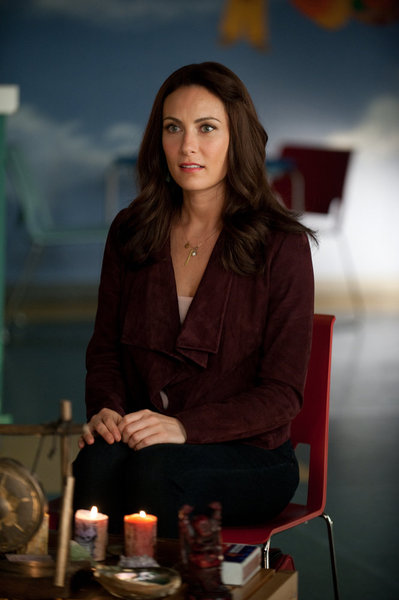 Laura Benanti is a relative newcomer to TV viewers. Her first sitcom, Starved, debuted in 2005. But the humorous take on group therapy for people with eating disorders didn’t resonate with audiences and it was canceled after seven episodes. Her second go at small screen support systems, Go On, is much more likely to last a while — thanks in no small part to the fact that Matthew Perry is the star.

But before Laura became a television actress, she had quite an impressive career on Broadway. She’s had four Tony noms and one win for her 2008 turn as Louise (aka Gypsy Rose Lee) in Gypsy. And even though she loves the theater, she’s also clearly a TV fan.

In a recent interview she talked about Go On, some of her favorite shows to watch and the star of the Great White Way she’d most like to work with.


On Playing a Character That She’s Similar To
“I would say she’s more similar to me. I tend to play either really dramatic characters or people where it’s a little bit more of a stretch for me. I don’t mean like I don’t have to act in this at all. But I actually think some of the hardest acting is the acting where it’s closer to you. Because then, you have to become more aware of yourself, which is everyone’s journey I suppose.

On Matthew Perry
“Someone of his stature and his fame could make you feel like a little, tiny person. He never makes you feel that way. Within five minutes of meeting him, I forgot how famous he was. And he’s so generous in terms of how he works. It’s never like ‘every comedian for themselves.’ He’s always pitching ideas and funny jokes for everyone, not just for himself. And if you do something funny, he’ll be like, ‘That was really funny.’ He’s so kind and good natured, and a really hard worker. He’s working his ass off every single day.

“And we’re just so lucky that he’s our leader. We really, really are. He’s such a great guy and he sets the tone on that set and it’s my favorite place I've ever worked. It truly is.”

On Her Character’s Reaction to Matthew Perry’s On-Screen Persona
“Lauren sees that in some ways the group has gotten closer since Ryan has entered the group. I don’t think she’s unaware of that — that he has brought something to this group. He’s lit a fire under them. There’s a new [statement] and there’s a new energy in that group that wasn’t necessarily there before. And even though he can be really frustrating, he’s challenging in a really good way.”
On the People in the Go On Group
“They have a bond for some reason. There are just those people in your life, when you meet them and you feel like you've known them forever.”On the Fans’ Reaction to Go On
I'm in New York right now and I've had so many people come up to me and say how much they love the show. And every single one of them has said, ‘When my dad died or when my husband died or when my dog died…” They all talk about these tragic losses that they’ve had and they said, ‘This is my favorite show because I relate and I get to like laugh and cry and feel in a 23 minute period.’  So that’s cool.”

On Her Favorite TV Shows
“I always watch Up All Night. I'm super into it. I'm going to say a lot of NBC shows. I'm not brown-nosing. This is true. Super into 30 Rock. Super into Up All Night. Parenthood. Oh God, Parenthood is so good.  I love, oh my God, Homeland. Homeland is incredible. And The Voice. God, I love The Voice. I love it so much. And now that they can steal each other’s people, get out of here. Get out of here with that. Why didn’t I think of that? So yes, that’s pretty much what I'm watching.

“And The New Normal. I'm obsessed with The New Normal, also… Oh, Revolution. I'm also super into Revolution, except they’re so clean and shiny for a post-apocalyptic world. I want to look that good.”

On the Stars She’d Most Like to Work With
“Chris Kluwe, the punter for some sports team? He’s been doing so much good work on behalf of marriage equality. So I'm into him for that reason and that reason alone. No. Who would I like to work with? I don’t know. God. There’s so many incredible actors out there. I'm really having an awesome time working with Hayes MacArthur who plays Wyatt. He’s so, so fun. Look. My standard answer is Patti LuPone because I just love her so much. So I'm going to end with that.”

Michael Marisi Ornstein from Sons of Anarchy is a Real Artist