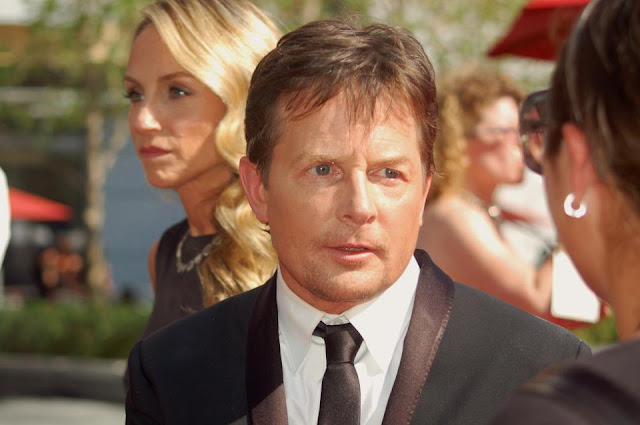 This past weekend stars gathered in New York City to support one of their own at the "A Funny Thing Happened on the Way to Cure Parkinsons" benefit. The Michael J. Fox Foundation held it's annual gala at the Waldorf Astoria on Saturday night. The event is put on each fall to raise awareness of and money for the Foundation's efforts to help cure Parkinson's disease, which Fox is afflicted with.

Fox's Rescue Me co-star Denis Leary hosted the evening and started the night off with an original song he wrote for the Family Ties actor. According to the Wall Street Journal, Leary and his band, The Enablers, sang, "Everyone is wondering how long I'm going to last. I'm Michael J. Fox, I'm kicking Parkinson's a—."

Fox joked that he just might use the ditty as the theme song to his new NBC sitcom. Leary, who often razzes Fox about all his Emmys, explained his friend's new sitcom, "The premise is Mike Fox comes back to TV. I'm not bitter."

Presenters that evening included Fox's wife of 24 years Tracy Pollen along with journalist Katie Couric, CBS correspondent Bill Geist (who recently announced his own Parkinson's diagnosis), his son Willie Geist, ad exec and TV personality Donny Deutsch and actress Amanda Peet. Bill Geist gave a speech and jokes he was penning a memoir entitled "I'd Shoot Myself, but I Might Miss."

Next up was comedian Louis CK who gave the centerpiece performance of the event. At the end of his routine he introduced Fox, who got up and made a speech, thanking everyone for coming, even in the wake of superstore Sandy. He stated, "There's nothing we can't achieve together; thank you for everything you do."

And then in a Marty McFly-like moment, Fox jumped up on stage with the evening's musical guest, Elvis Costello, who did a rousing set including "Pump It Up."

Almost 1000 guests were in attendance at the event, which raised $4.5 million for Parkinson's research.

Read more about the Michael J. Fox Foundation at their website.