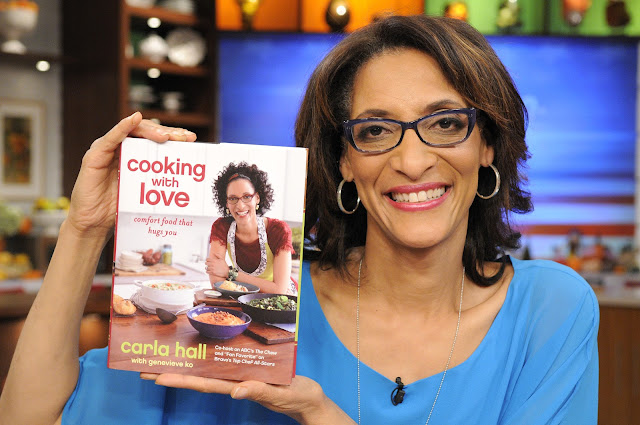 We've watched every season of Top Chef including the All-Stars, the Masters and Just Desserts. And while there are many chefs we have enjoyed through the years one of the standouts is Season 5's Carla Hall. Her infectious laugh and bright outlook kept viewers and contestants smiling at every turn. And she was still as joyful when she returned in Season 8 for All Stars so much so that she earned the title of Fan Favorite.

Since the show ended Carla has continued her sweets/catering business Alchemy and joined the panel on The Chew, cooking's answer to The View. Each day she joins Mario Batali, Michael Symon, Clinton Kelly and health Daphne Oz to dish on all things food related. And after years of begging from her fans, Carla has finally released a cookbook called Cooking with Love: Comfort Food that Hugs You. In a recent exclusive interview we talked to Carla about her about when she knew she could cook, what her favorite childhood dish was and pizza in Milan.

On Her Favorite Childhood Dish
Carla told us all her cooking is influenced by her southern upbringing and her grandma's cooking even though she never thought of herself as a southern cook until appearing on Top Chef. She stated, "But because it's so much a part of me, it is my lens. It's how I see things." So we asked her what was the favorite dish that her grandma used to make. Here Carla describes Grandma's biscuits and her five flavor poundcake.


On Where and What She Would Be Eating Right Now
We asked Carla if she could be anywhere in the world eating anything she wanted what would she be having? Without even knowing it, her choice was also in one of our favorite countries and a staple of our diet — pizza in Milan. And she asked us to come along. "Then you have a friend, okay it could be two friends, Amy and Nancy. And all three of us are sharing this pizza… That's where I want to be." How could we say no?


On Why She Wrote "Cooking with Love: Comfort Food that Hugs You"
The cook told us that after Top Chef people were constantly asking her when she would open a restaurant or write a book and so she said, "I felt like during All Stars it was time." She added, "I wanted to have a book where people got to know me and they got to know me through my food." Here she talks about writing the book.


On If She Wanted to Be a Celebrity Chef
Carla had no idea where her path would lead when she left her career as an accountant and took up cooking.  She admitted, "I would have been afraid if someone told me that I would be here now." She joined Top Chef because, "I thought, 'That would be a nice little personal challenge. I think I may do it,'" but never imagined she'd end up becoming a TV personality. She talks about her journey.


Find that pot pie and other recipes in Cooking with Love: Comfort Food that Hugs You available now. And watch Carla on The Chew every weekday (check local listings for times).


For related stories check out:
Wolfgang Puck Shares His Culinary Favorites
Competitors Get a Shot at Redemption on Top Chef: Texas

Posted by Pop Culture Passionistas at 6:21 AM