On the Red Carpet with Paula Abdul, Derek Hough and NappyTabs 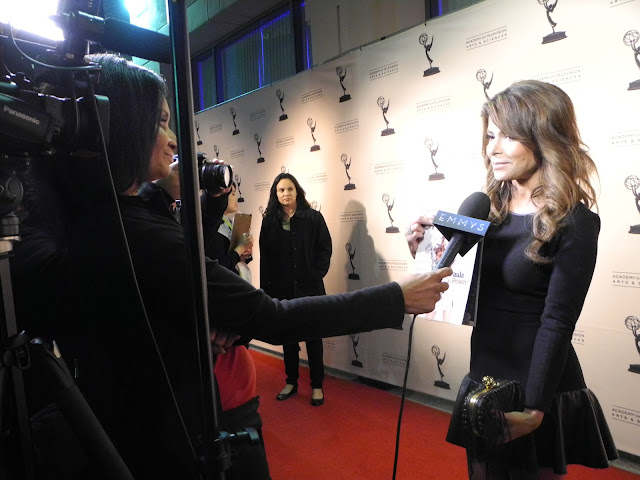 A few weeks ago the lovely folks at the Archive of American Television asked us to cover the red carpet at the Choreographers: Yesterday, Today and Tomorrow event at the Television Academy of Arts and Sciences. Although we don't partake ourselves, we are big fans of watching others dance. We spent years growing up at our sister's dance recitals, love a big musical theater production number and never miss an episode of Dancing with the Stars or So You Think You Can Dance. Plus we pretty much know every Gene Kelly movie by heart.

So it wasn't a big burden to be asked to go talk to Derek Hough, Paula Abdul, Kenny Ortega, George Chakiris, Napoleon and Tabitha D'Umo and Mrs. Gene Kelly about the current state of dance on TV. Here are a few excepts from the interviews.

George Chakiris on the Current State of Dance on TV
Our biggest thrill of the night came when an unannounced dancer walked the red carpet. It was all we could do to contain ourselves when George Chakiris (Bernardo from West Side Story) came over to chat. Somewhere in his house he has an aging portrait of himself, because there's no way the man is 78 years old. We asked him what we thought on the current state of dance on TV. He replied, "We get to see wonderful, young talent, some incredible young dancers — guys and girls. Their technique is just mind boggling. They're really fantastic. And it makes room for other choreographers to come into the picture, young people who wouldn't have that opportunity otherwise."


Kenny Ortega on West Side Story
Sometimes when doing red carpets it's interesting to see a celebrity's reaction to seeing another star. This was the case when we spoke with Kenny Ortega of High School Musical, Newsies and Madonna/Michael Jackson videos fame. A huge director/choreographer/producer in his own right, he was giddy to see George Chakiris, citing Bernardo as the reason he got into dancing. He gushed, "The first time I saw West Side Story, and I saw him play Bernardo, which he won and Academy Award for, that was it. My mom pegged my black jeans, died my white shirt purple. I was Bernardo for months and months and I was determined to one day be a dancer… It was the movie that influenced my life, changed my thinking and gave me a purpose and a goal… He's my hero."

Derek Hough on Dancers Today
On a medically imposed hiatus for a neck injury, Dancing with the Stars' Derek Hough stopped by the red carpet. He credits unknown ballroom dancers that he grew up around as his inspirations and says the current state of dance is "better than ever." He said that these days dancers are "not just a means to enhance a performance but they are the performance."


Napoleon and Tabitha D'Umo on Advice for Young Choreographers
Husband and wife team, NappyTabs, from So You Think You Can Dance said they were influenced by Michael Jackson and Paula Abdul when they ware starting out. Tabitha offered this advice for young choreographers, "You have to have patience and you have to do it because you purely love it from your soul, because it's a tough business."


Paula Abdul Talks About Gene Kelly
Paula Abdul from American Idol and X Factor said Gene Kelly was one of her greatest influences and mentors. She recalled, "I was four years old when I saw Singing in the Rain. And my parents said that I stood up and looked at the television and looked back at them and said, 'That's what I'm going to do. I'm going to be an entertainer."


Watch all the complete interviews at the Archive of American Television's YouTube channel.