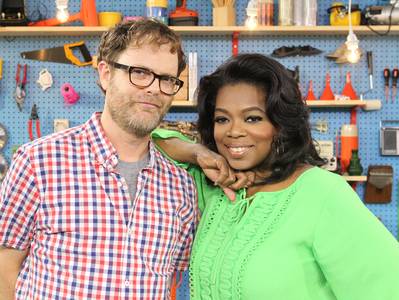 Perhaps there never been an actor more different from his TV persona that Rainn Wilson. While fans have come to know him as the maddening paper salesman Dwight Schrute on The Office, off-screen Rainn is a man in search of personal enlightenment.

As a result he created the website SoulPancake, where he invites social media users to “chew on life’s big questions.” Now Wilson is teaming with Lady O for a special called Oprah And Rainn Wilson Present SoulPancake, which airs this weekend. Together with their creative team they will explore one of life’s most perplexing topics — “What is love?”

In a recent exclusive interview, Rainn explained his journey from sitcom star to the guru of a new wave of introspective intelligentsia, “When The Office started taking off I wanted to do something with some friends of mine that was really positive and cool and different on the web. And that’s where SoulPancake.com was born. That’s a social networking site for people that are interested in philosophy and spirituality and creativity and want to explore the human experience and life’s big questions on a website.”


Rainn continued, “Now we have an app for iPhones. And then after that we realized that our mission was much broader and larger than just a website and so we wrote a book, SoulPancake the Book, which is an activity, interactive book of exploring life’s big questions. And that came out about three years ago, it was a New York Times Bestseller. And we were very happy with that and it continued to sell briskly and it’s very cool.”

All the good buzz put Rainn on Oprah’s radar. As he recounted, “Around that same time as we were doing the book, I had been on Oprah’s Soul Series interview. And she was starting OWN and I said, ‘Well this is a great fit’ and so what we did for OWN was that we started creating short content for them, for their Super Soul Sunday.”

From there, a bigger project emerged. As Rainn recalled, “Those were going really well and always the goal was, ‘Let’s just try and make a TV show and see what a TV show would look like on OWN. What would a SoulPancake TV show look like?’”

The result is the big event on Sunday. Rainn remarked, “This special that we shot that explores a life’s big question and in this case life’s big issue which is love. And it looks at the issue of love from many different lenses and it’s from animation, stop motion to man on the street interviews to interviews with experts to profiles of people dealing with various aspects of the issue. And Oprah and I host it.”

Rainn has established quite a rapport with Winfrey as they’ve nurtured their SoulPancake collaboration over the years and their on-screen chemistry is undeniable. But the 46-year-old star was clear to point out that he’s not going to give up acting anytime soon. When The Office ends after this season he’d like to continue to develop TV projects, act in independent films and maybe return to his roots on the stage.

And he’s built a powerful team that will keep SoulPancake alive while he pursues his many interests. As he noted, “SoulPancake is always going to be something that I’m attached to and working on but it really is a side project. And besides, the people that do most of the work for SoulPancake is my team my co-founder, Devon Gundry, runs it along with Shabnam Mogharabi and Golriz Lucina, a bunch of people with very odd names. But they’re all the executive producers on the show and they run it really well. We have our YouTube channel, which is going really great and we’re almost up to five million views on our videos that we’ve produced.”

While Rainn continues to inspire fans to wrestle with life’s big concepts, he’s working on his own personal growth. But when it came to encapsulating his thoughts on the “what is love” theme, Rainn was stumped, “I don’t know the answer. I just did this special on love with Oprah and I still have no idea what it is. It’s the greatest mystery that we humans will ever wrestle with. I’m no closer to having an answer, but that’s really what SoulPancake is all about.

Yet he thought Schrute might be able to come up with a more concrete response the question, “Dwight would always go back to either an animal analogy or a caveman analogy. So love is something having to do with meat and mating probably.”

Catch Oprah And Rainn Wilson Present SoulPancake when it airs on Sunday, December 16, at 12 p.m. EST/11 a.m. Central right after Super Soul Sunday on OWN.