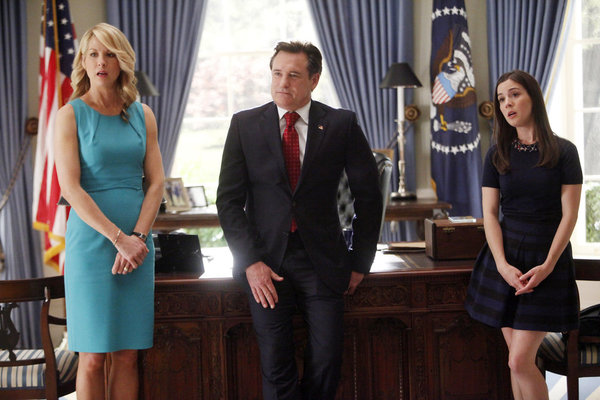 1600 Penn with Bill Pullman and Jenna Elfman premieres tonight on NBC. They star as the president and first lady in a comedic look at life in the White House. It's not the first time Bill has played the Commander in Chief, he was the president in the 1996 film Independence Day, but this time around is very different for the actor. In a recent conference call interview, we spoke with Bill and Jenna about their roles on the show.

On the Role Politics Plays in 1600 Penn
Bill Pullman: “The show the show itself is not very politically motivated. And that’s not our intention. Our intention is to do a story about a dysfunctional family that happens to be in the most famous address in the United States of America. And while it touches on politics it’s a backdrop and not at the forefront of any of the story lines."

On What Research They Did for the Parts
Bill Pullman: “It was a surreal time to be making this because of the campaign going on. So every time I read in the newspaper any account of either candidate going through something I could really zero in empathetically about what it must be like to be in private moments with the family about different issues and then ways in which that could be tweaked in a comic way. So it was every day that we were shooting it was in the news."

Jenna Elfmann: “Well thank god I have so many first ladies on my speed dial. So I closed my eyes and I scrolled and just picked, anywhere my finger landed. I wish. Unfortunately, I couldn’t ring up any current or former first ladies so I used the old fashioned way of a bookstore and books about first ladies. And really just tried to get a sense of what their reality is landing into such a heightened existence from their life prior to that and what obstacles they faced and what goals they had as first ladies just to get myself oriented.”

On What She Likes About Her Character
Jenna Elfmann: “What I get to play with my character specifically is just that she does have these moments where she’s a fully capable lawyer and political consultant and she does have a sharp wit. But when it comes to the family as the stepmother that’s her Achilles heel. And that’s where she falls off balance and is grasping for straws and gets a little bit nutty. And then when the two worlds collide, when her necessity to please or win as a stepmother collides in the political realm, it gets a little crazy for her. And I’m having fun having those moments where I get to play like I know how this is supposed to go but not when there’s a family involved. And that’s when there’s like an inner conflict within my character and I get to fall off balance and find a comedy.”


On Working with the 1600 Penn Cast
Bill Pullman: “This is my first time doing a series. And I imagine you’ve probably as journalists have all heard, ‘Oh we love each other on the show.’ But actually I’m a newbie and I get to say that for real as an honest thing. This is a great group of people that are incredibly respectful of each other and the whole process has been a great gift. All of the other actors are family, too… and I think that’s reflected in the episodes. There isn’t that modern snarkiness in the characters and I think it comes from the fact that all these people aren’t that way in life."

Jenna Elfmann: "[Creator and co-star] Josh [Gad] has one of the best senses of humor and timing of anybody I’ve met in a very long time combined with a true sense of joy. And it’s rare in my experience that I find actors who are men who are truly joyful, who are really freaking funny. And you either get one or the other or none or neither. But what I love about his character is that in all of the craziness and all of the mis-estimation that is Skip he brings, there’s always a little, even if it’s one billionth of a fraction of truth and a magic and honesty and realness and humanity to our family on this show. And so while being very annoying at times, or just confounding, he inevitably has a piece of humanity and heart and magic that ends up bringing the family together. And this is the strangest analogy but he kind of reminds me of Curious George. Curious George always gets into trouble but his mistakes always end of leading to something good."

On Single Camera Vs. Multi-Camera
Bill Pullman: “This is the story that involved heartfelt things. And it’s nice not to have that live audience going, ‘Aww’ every time. So you can have many more colors about. I just find that in that multi camera thing when that audience gets to a sensitive moment and they all throw it into one place it’s just dangerous for the life of a fully nuanced show. And then also for cutting purposes you can get the farce better I think with single camera because you can cut and jump and make things happen and also make small things happen. You can throw away a line a lot easier I think. So I’m liking all of this. And it feels familiar to me. It’s a lot more like film.”

Jenna Elfmann: “I love it. And one of the reasons I love it is the cast. Everywhere I turn in any scene at any given time there’s totally strong cast members right there. And that’s so important in comedy. And also we have the most amazing director of photography named David Jones. And he makes this single camera show look so beautiful and like a movie. And one of my hesitations for a few years — I wanted to do single camera but I had felt so hesitant because so many of the single cameras that I saw on TV I hated the way they looked. They just all looked the same. They looked bright and they had music running through every single moment of every scene. And I just didn’t want to fall into some generic trap of bad single camera comedy. And I just feel so lucky that this is my first one as a series regular and it looks so beautiful. And I’m surrounded by such strong talent in every department but I think that really makes the difference… I’ve done comedic films where there’s no audience so it’s not like a foreign territory for me. It’s just different. And I’m really enjoying it. I’ve done of plenty of multi camera and I’ve really got a good dose of that and I’ll always love it. But there’s something a little bit more sophisticated in a way about this and the timing is different but I don’t feel like I’m in a foreign place with it. I really feel at home and I love it.”

On Working with the Writers
Jenna Elfmann: “What was wonderful from my experience, we shot the pilot and then when we got picked up. We were getting ready to go into production to film all the episodes, the writers had asked me to come in and meet with them and hear stories of my life and things that are specific to me that they may be able to incorporate whether it’s actual technical things like the fact that I’m a classically trained dancer — which they did bring into an episode — or just some more tonally, my sensibility in terms of my own humor, my voice, my rhythm, my timing, so they could really write specifically towards me in their incorporation of the character. And it was noticeable the adjustment and enhancement going into filming the series from the pilot having done that. And I’m so glad they did. And it’s really made a difference.”

For related stories check out:
The Cast of The New Normal Talk About the Show
Laura Benanti Talks Go On and Pop Culture