Cheryl Hines Unleashes Her Wacky Side on Suburgatory 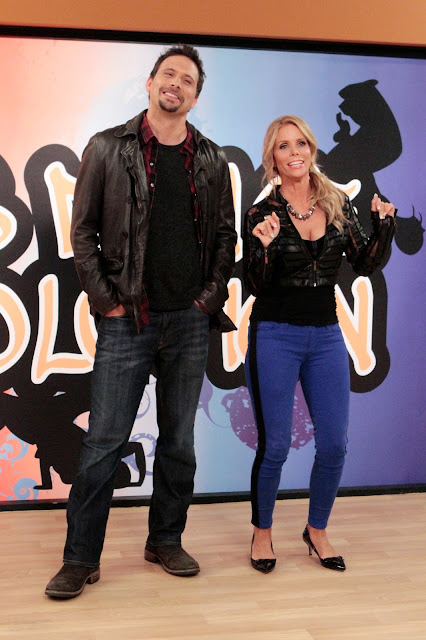 Anyone who watched Curb Your Enthusiasm back in the day when Cheryl Hines played Larry David’s wife, will remember her as a grounding force in a chaotic world. She was always truly funny, but she tended not to be the wacky one in a given scenario.

That all changed when Cheryl joined the cast of Suburgatory. Now she plays Dallas Royce, the super-optimistic, extravagant but lovable woman next door. And anyone who knows her history as an actress, knows that she was well trained to tackle such an out there character.

In a recent exclusive interview, Cheryl recounted, “My experience is at The Groundlings Theater, where we created different characters and did sketch comedy. And sometimes the characters were outrageous, but they always came from a real place. So even working there, we had to create characters from the people that we knew.”

The 47-year-old star noted that it isn’t hard to find inspiration. “When you start looking at the people in your life, you probably know a few outrageous characters. And so you look at those people around you.”

She looks to her own mother for one source, “My mom is very Southern and she in real life says things like, ‘If you’ve got it, flaunt it.’” And she recalled another specific incident that she experienced, “I have a friend who did a modern dance presentation for the new harvest moon at her birthday party. And at the same time this person is a mother, she drops her kid off at carpool. So it’s just finding the different levels and aspects of real people.”

Besides, Cheryl admitted that she does share a couple of key personality traits with the small screen suburban mom. “I like to have a good time. And in real life I do look at life sunny side up. I’m always looking on the bright side.”

Of course, she conceded that she doesn’t live up to her character’s level of enthusiasm, “Dallas takes it to an extreme level. There was one line where she said something like, ‘Dahlia is so talented. She has a way of putting her needs above everyone else’s.’ And somehow she admires that about her daughter. So I don’t go that far in real life but I do think, ‘You know what, we’ll make the best of it and we’ll have fun.’ But Dallas is probably more fun that I am. But I like to think that there’s a little bit in there.”

She must have tapped into that joyful nature of hers for tonight’s episode. She described the storyline, “George and Dallas are having some parenting style differences and things get a little tense when the girls take the PST and Tessa gets an ice cream cone and Dahlia gets a new car. A little tension starts to build and then don’t ask me how or why but we end up having a dance off in a hip hop class.”

When asked if she partakes in the scene, Cheryl laughed, “Sadly, I do. There’s some moon walking and there’s some pop and locking. It’s really something.” And she described the preparation, “We did have to do some quote, unquote dance rehearsals. It’s no Glee by any means but it is quite entertaining.”