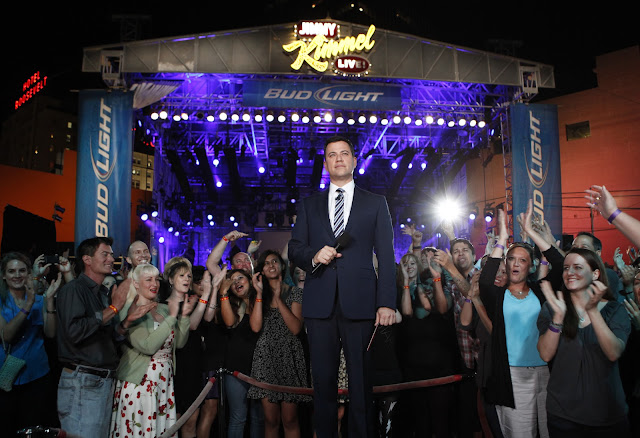 Jimmy Kimmel Live moves to the 11:35 p.m. slot this week, pitting Jimmy directly against late night rivals David Letterman and Jay Leno. It’s no secret that there is no love lost between Jimmy and Jay. And at the same time Dave is Jimmy’s admitted hero. In a recent conference call interview he discussed his feelings about both men and going up against them on late night TV.

In an attempt to get a leg up on the ratings race, The Tonight Show will begin airing at 11:34 p.m., one minute before Jimmy Kimmel Live starts at 11:35. Jimmy joked, “NBC has had a lot of success moving Jay Leno earlier so it makes perfect sense.”

On a more serious note he added, “I’ve noticed in the TV listings that he’s starting at 11:34 now, I believe. But it’s an interesting strategy. It tells me that maybe they’re a bit concerned. And I’ll be curious to see how long they’re able to keep that up, because I would assume they have to give a minute of commercial time away in order to do that. So, I’ll be curious to see how that goes."

Jimmy’s open feud with Jay dates back to the time when both Leno and Letterman were being considered for Johnny Carson’s spot on The Tonight Show. Jimmy began by clearing up a common misconception that he is obsessed with Leno. He stated, “Ninety-nine percent of the thinking and talking I do about Jay Leno comes when I’m doing an interview, because, otherwise, I don’t think much about him, and I don’t talk much about him.  But people ask me about him constantly and there’s nothing I dislike more than a guest that won’t answer the question. So I feel compelled to answer questions when I’m asked them. So, it may seem, if you read about me, that I’m obsessed with Jay Leno. I promise you that I’m not.”


But he is slightly obsessed with Letterman. He has been a fan of David Letterman’s since high school and admitted to having an anniversary party to honor Dave’s second year on NBC at which he made hand made drawings of Letterman on buttons for his guests. So he explained, “When the book The Late Shift came out and I realized that Jay had schemed and to take something from someone that I admired, that’s what did it for me, I guess. And this scheming seems to have continued. But, listen, Jay’s just another guy doing a TV show. I don’t hate him or anything like that.”

As for this obsession with Letterman, and going head-to-head with his idol Jimmy said, “It’s a little strange. The fact is, though, we’ve been on against him for the whole time we’ve been on the air now. And it was weird for me at the beginning. But I would think that if I was David Letterman, none of this would matter to me at all. I’ve earned my place as a legend in broadcasting and probably the biggest comedy influence of the last 20 years on everyone who followed him. And if I was Dave, I wouldn’t bat an eye. And the fact of the matter is, if it did make him nervous, he probably wouldn’t have been so nice as to do my show and to say so many nice things. I think Dave is going to be just fine.”

The late night host also added, “If Nolan Ryan is pitching to you, you still have to try to hit the ball… no matter how many baseball cards you might have in your bedroom or posters of him on the wall.”

And while Jimmy has always admired Dave from afar, getting closer to him is just a hard nut to crack. Letterman is an infamously aloof and private person. Jimmy joked, “I’m trying to have a relationship with Dave. I told him I’d like him to stay at my house for a couple of weeks. I would very much like to be his friend, let’s make no mistake about that. But with that said, the more you want to be Dave’s friend, the less Dave wants you to be his friend. So, I’m trying to play cool and so far it’s not working that well.”

Jimmy also had some thoughts on how long Jay Leno will stay with The Tonight Show and if Jimmy Fallon is the next in line. “The fact of the matter is NBC is going to have to make a decision, at some point. As much as he would like it to be the case, Jay Leno is not going to be able to stay on television forever. And, obviously, Jimmy Fallon is the heir apparent and he’s doing a great show and so it makes sense that people would talk like this. But, with that said, never count Jay out. He’s like Jason in Friday the 13th. He seems to pop up just when you think he’s dead. He comes back to life and he’s got a hatchet.”

For now Kimmel will compete with Letterman and Leno for the late night throne. And although he is moving a mere 25 minutes, those are some very precious minutes. Jimmy pointed out, “The big deal is that, for some reason, people go to sleep at midnight. You lose a lot of people at that time… And so, the audience is just much bigger. There are a lot more people up watching television at 11:35 than there are at midnight. It’s as simple as that. And besides that — and maybe this is just something that we in the industry are more interested in than the general public is — but there’s mythology and traditions surrounding that 11:35 time slot that started with Johnny Carson and then became a big deal when Leno went up against Letterman. And so, people are interested in it from that standpoint as well. It’s definitely more prestigious, whether that’s valid or not, I don’t know. But the main thing is, though, more people are up to watch the show.”