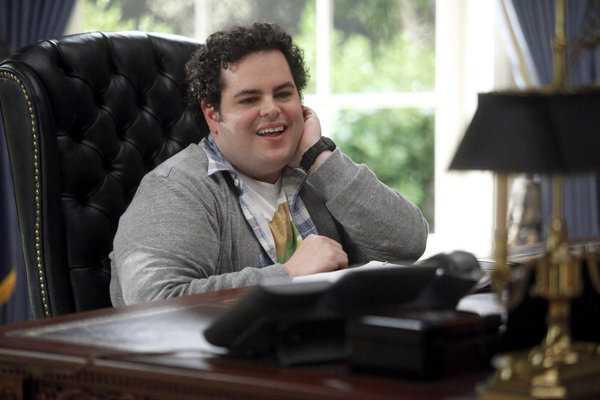 Before creating and starring as Skip Gilchrist  in the new sitcom 1600 Penn, Josh Gad was best known for his turns on Broadway as Elder Cunningham in The Book of Mormon and William Barfée in A Putnam County Spelling Bee. He also appeared on Back to You, Modern Family and The Daily Show and made a few movies including 21, The Rocker and Love and Other Drugs. It was while he was on Broadway in The Book of Mormons that the idea for 1600 Penn began to perculate. He co-created the show, which is a comedic look at life in the White House, with Jon Lovett (a speech writer from Washington) and Jason Winer from Modern Family directing. In a recent conference call interview he talked about creating the show and working with the cast, which includes Bill Pullman as the President and Jenna Elfman and the First Lady.

On Creating 1600 Penn
“What happened was Jason Winer — the director of Modern Family — and I had met around the time that Modern Family was casting for one of the roles. And I had passed on it, which is probably stupid considering my bank account is a lot smaller now than it could’ve been. But Jason and I met up again around the time of Book of Mormon and we hatched this idea. And we knew that we wanted to work together. We knew that this was the perfect vehicle to do that. And that missing ingredient was getting the person who could ground it into the reality that we wanted to set it against, which was the White House. And we came across Jon Lovett, who is not be confused with the former Saturday Night Live comedian, but a young kid who was working for the President’s administration as a speech writer. And then once that happened it started firing on all cylinders. But the process began around my final five months in Book of Mormon and then went from there. When I finished I went to shoot the show."

“Essentially what it was, it was an opportunity for Jason Winer to exploit me. He saw my character in Book of Mormon and loved it and wanted to take that and bring it to television. And interestingly enough when we were first discussing this project what intrigued me so much about it the idea of this family like my own family or like a lot of dysfunctional families who has their warts and under the constant scrutiny of being under this microscope. I originally didn’t want to play Skip. Because I was afraid there was a broadness on the page for the character that I was genuinely afraid of that, this is a character who can come across as annoying. And it’s a dangerous thing to play. And it was only after I realized that if anyone else played the role I would be very upset with myself because I would be jealous every week that I decided that I really wanted to dig into it. And when I could find that humanity and bring it to the character it felt like it came to life. And so that’s how it all started and the intention was we really wanted to dissect what it meant to be a family in the most extraordinary of circumstances. And what’s more extraordinary than your father being the president of the free world and then you being the first family of the United States of America. And that’s what intrigued us into the whole project.”

On Basing the Show on the Obamas
“Jon Lovett, who was one of the President’s speech writers, has said that in writing for the show that it was never his intention to portray the Obamas. Because the Obama family is almost supernaturally perfect. And perfection doesn’t really lead to comedy. But you can look as far back as Mary Todd Lincoln and you can look at some of the current presidential predecessors and you can see dysfunction in the halls of the White House for at least a hundred years. And what’s so interesting now is under the scrutiny of the 24-hour media news cycle what happens if a family were to be front and center? How do you avoid the blitzkrieg of questions? If you think back to the Bush twins and all the questions that they had to deal with about their alcohol consumption even though they were just in college. Or you look at some of the questions that Chelsea Clinton got about her life and her lifestyle. I think that there’s a lot of questions that will be addressed the more and more we live in that bubble and the more that 24-hour cycle is there and present.”


On the 1600 Penn Cast
“Bill has this absolute control of a room when he walks in. That there’s a reason that he’s played the president on more than one occasion. It’s because you would trust him to be the leader of the free world. You look into his eyes and you see somebody who has command of a room, who has the wherewithal to lead people through either an alien invasion or his son’s invasion of his home. And with Jenna there’s this absolute sense of inner calmness and inner strength but an outer flurry that is excitable and that is all of these wonderful things. And that character absolutely resembles the inner and outer version of what you get from the brilliance that is Jenna Elfmann.”

The Tone of the Comedy on 1600 Penn
“There is a cynical approach to a lot of comedy today. And some people will love the fact that we’re taking the opposite route and some people won’t. But [there’s] is that’s an absolute truth to this show. This is not a cynical world. This is a very optimistic family. And they love each other. And we as the cast have truly fallen in love with each other.”

On Casting Bill Pullman and Jenna Elfman
“When we set out to do this, one of the first decisions that we had to make was figuring out who our president and first lady were going to be. And when Bill and Jenna fell into our laps it set the rest of the show afloat because we knew that this president and first lady couldn’t be goofy. If they were in any way goofy nobody would buy them in the office and therefore we wouldn’t have a show. Because the axis is so wobbly when it comes to the children the centrifuge which is the president and first lady needs to be as strong as possible. And that’s what gives us the freedom to sometimes go a little crazy with some of the other characters. And there’s an absolute necessity for people to relate to this family. Because if they don’t relate to the family then what are you watching it for? What are you really tuning in for? And especially as the episodes go on, you’ll find most of the characters relatable if not all of the characters relatable to you or somebody that you know I think it’s safe to say.”

On the Role of Politics in the Show
“It’s absolutely not a political show. And I can’t emphasize that enough because we never set out to make a political show. There are so many great political shows out there. There really are — from West Wing to Veep — these are wonderful political shows. We wanted to make a show about a family that happens to live in a world where they are surrounded by politics. And while we do engage in those story lines it’s not really a commentary on that necessarily if that makes sense. It happens to be set in a house like any other house except that it’s an address that everybody knows. And that’s the thrill of what we’re doing. And that’s what’s exciting to us. And that’s the unexplored territory that we’re looking at. And so when this idea of trying to comment on the politics of the time that’s not really something that comes into the equation. But it’s always an underlying element in the comedy. And that’s the genius of Jon Lovett and Mike Royce who comes from the world of Men of a Certain Age and it’s that it’s our characters responding to some of those things but not those things wherein our characters have to live their daily lives.”

On Having a Sense of Joy in Life like Skip Gilchrist
“I have an unbelievable sense of joy in my life. I look at every day with a glass is half full approach to life. I’m blessed with an incredible family. I have a daughter that I cherish. And it’s that joy that I bring to the character on a day to day basis. It’s that joy of coming into a workplace the likes of which I have only experienced once before with Book of Mormon in that sense where everybody has this incredible pride in the work that they’re doing. Everybody is looking toward the same goal. This show is very special. It really is. The episodes as they progress will become more and more extraordinary. And having been able to see a few more episodes than my cast mates I can tell you that this is definitely one to be very proud of. So yes that joy is something that I feel. Am I as joyful as Skip? I don’t know that that’s possible. I think he’s running the gambit of being a little too joyful for his own good.”