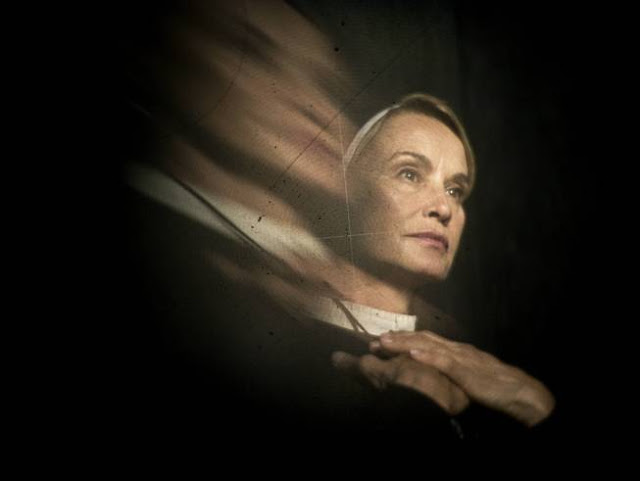 In a recent conference call interview, Jessica Lange talked about how her first American Horror Story TV persona Constance differs from this season’s Sister June. Of Horror House’s must more than just nosy neighbor, she said, “‘Puppet master’ is a very good description of Constance.  The thing that I found, the spine of the character of Constance, was that this was a woman who had basically lost everything and had nothing left to lose and also was extremely, what can I say, unafraid. So she just manipulated her way and put herself in situations that probably other people would not have.”

As for her Asylum character, Jessica noted, “With Jude she has a lot to lose because she’s holding on to something that she feels has saved her life and redeemed her. And then when it all becomes clear that everything was false, from the idea that she did not run over and kill this child, which is what sent her on this whole path, trying to find some kind of life, some redemption, some spiritual life. That when she discovers everything is false from the beginning, there’s a descent into madness that is completely different and for me much more interesting to play.”


She reflected on both of their personalities, “Constance was a wonderful character, she was a throwback to the ‘40s tough dame, sweet talking but with a real edge. She did not suffer fools. Nothing went past her. She had a way of moving through everything and getting what she wanted.  This woman is much more vulnerable and, in some way, tragic.  She’s destroyed her life.  She’s an addict.  She’s an alcoholic.  She’s had bad luck with men, a lot of bad men in her life.  And she’s come to the end of the road with the hopes that this church, that this man, the Monsignor, is going to save her, that she’ll become something else, that she’ll make her life worth living. And of course that all comes down, crashing, and she’s left absolutely alone, completely and totally alone.”

Jessica conceded that she likes playing both types of women. “Those are two things I love playing. Because you also find them in Williams’ characters, the thing of aloneness, the idea of being completely alone in the world and couple that with madness and it’s a really potent combination to play.”

Luckily for Ryan Murphy, Jessica has embraced the complex roles he’s created for and is flexible enough to evolve with them. As she remarked, “This thing kind of has a life of its own.  It’s like a river, it moves one direction and then it continues that way and then it shifts direction. Ryan has these things roughly plotted out of where things are going to go but I don’t always know ahead of time.  I have to say I understood that we would be dealing with this kind of descent into hell, but I did not know really that Jude would rise to the top of this in a way.”

Yes the Emmy-winner admitted that she enjoys the open-ended nature of the plot. “That’s what makes it interesting to play because usually you get a script and you have all the story, all the acts are there for a play. You know what happens in the first, second and third act. And you know how it starts, you know where you go and where it finishes. And with this, it’s a whole new experience.  I don’t know where it’s going.  It’s like life. You don’t know what’s going to happen next.  And it’s been an interesting way to work.”

She acknowledged that it impacts her performance. “It’s made me work in a much more fluid, in a braver way in a way, of just taking every chance that comes along.  I don’t plan things ahead of time.  I don’t map out the character.  I don’t do anything.  It’s been for me a great, powerful exercise in working just in the moment, from this moment to the next moment.  And I actually think that it’s made me a better actor, in a way, because of not being able to go into something pre-determined.”