Our Interview with Suze Orman for the TV Academy 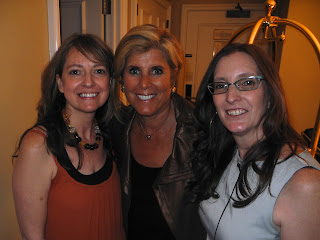 Late last year we had the pleasure of interviewing Suze Orman on behalf of the Archive of American Television. Luckily we did not have to review our own personal finances with her and get a Suze Smackdown or here her offer her famous phrases like "Declined" or "Are you kidding me?"

Instead we heard the life story of a woman who struggled like all of us, worked as a waitress until she was 30 and became one of the most trusted and powerful financial advisers on TV. Here are some of our favorite excerpts from the Suze Orman interview.

On Winning Her Emmys
Suze has won two daytime Emmys for Best Service Show Host. The first year she won, she was rooting for Martha Stewart, who had just gotten out of jail. She said the fact Martha did time was "a travesty" and she wanted Martha to have the Emmy. But when they called her name she said it was "over the top" for her. Hear her recollection of that night here.


On Kristen Wiig's Saturday Night Live Impression
When Kristen Wiig was on SNL she impersonated Suze several times. Suze said it was "the greatest honor in my life." It was especially important to her because her college roommate was the late, great John Belushi, so the show holds a special place in her heart. She went to the taping one time and approached a frightened Kristen backstage. Kristen was more than a bit shocked when Suze flashed her. Hear the story here.


On What Sets Her Apart
Suze discussed what makes her different from other financial advisers saying, "I didn't inherit money. I didn't grow up with money. I didn't marry money. I didn't think I was ever going to be this way." She feels it's her experiences growing up without that sets her apart. Hear what she has to say about her competition here.


For related stories check out:
Our Archive Interview with Chuck Lorre
On the Red Carpet with Paula Abdul, Derek Hough and NappyTabs