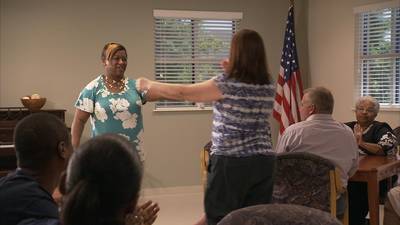 On January 7, a new showed premiered on OWN called Trouble Next Door. Each week the series follows a family in crisis and shows how the neighbors join together to help. The problems range from drugs, to violent  behavior to bullying and so much more. But no matter what the issue, the common thread is the neighbors step up to help improve the lives of those in their community.

On one episode, Annise Mabry is dealing with multiple issues making her home life unbearable. She herself is afflicted with a debilitating auto-immune disease while her daughter has become a recluse after suffering from extreme bullying and her son has Asperger's. It's almost too much for her to bare alone until her neighbors come to her rescue.

In a recent one-on-one interview, Annise told us she got to the point where, "What we're doing is not working. The neighbors are here. We need help. I can't do this by myself." And the result, she said, "Was life transforming for us."

It all started one night when Annise got so sick she couldn't get out of bed. She recalled, "I wake [my kids] up every morning for school. At 7:45 I hadn't woken them up. So my son and Niles came down and mommy's in the bed sick. Mommy can't move. And the kids didn't know who to call or what to do because we didn't know anybody. And that was so scary for them and I never wanted them to be in that situation ever again in their life."


So, with the help of the Trouble Next Door producers, Annise gathered her neighbors to ask for help. She said the parking lot of the community center was full and, "It blew me away." Not only did her neighbors come to pitch in, they didn't even know what the circumstances were or what needed to be done. And they were still willing to volunteer. All they knew was a neighbor was sick, her daughter was bullied and her son hard Asperger's and they needed help. The room was packed with those willing to reach out.

Annise didn't know what to expect standing in front of a room full of strangers. But she thought, "They're here because they went to hear my story. And whatever help they can give me is more help than what I have now. I was excited. I was anxious. I was nervous. I think it was more excited and more hungry for having change. Something had to change. It just had to."

She wasn't looking for much and she was thinking entirely of her kids. She remarked, "I was thinking about getting my children the help that they needed in the event that something happened to me. And somebody needed to be there for them. And really the only thing I was hoping to get out of the show was I wanted one friend for Niles and I wanted somebody to come by and talk to Ally on occasion. But I wasn't even expecting the amount of love and support and outpouring of resources that my neighbors have given me and that they continue to give me.

With the help of her neighbors, Annise's life has been completely changed. She stated, "We had so much fun doing the show. It was life transforming for us."

Annise says she often tells the show's producer, "You're missing the best part of our life. It's like you brought out the appetizer but you didn't even stay for the entree and the dessert. Even though her cameras stopped rolling that was when life began for us… Our life is so different and that's because our neighbors are involved."

Check Oprah.com for the tune-in time in your area to watch Trouble Next Door on OWN.