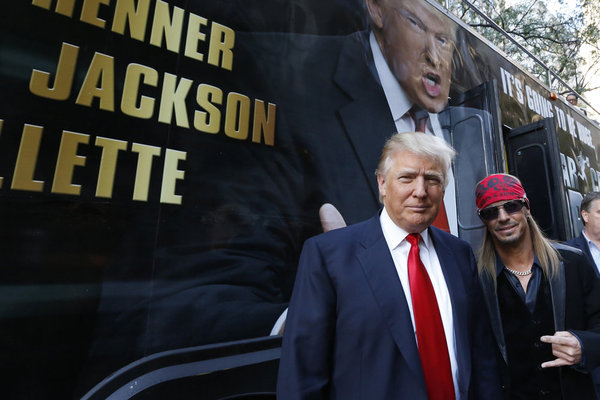 All-Stars Celebrity Apprentice starts on Sunday night with a cast of favorites playing to win money for charity. The only champion competing in the game for a second time is Bret Michaels, the Season 3 winner. Michaels took the top spot that year despite having major health issues prior to the finale that included and emergency appendectomy, a brain hemorrhage and a hole in his heat, which caused a mini-stroke.

The Poison singer made a full recovery and went on to compete in the live finale taking the prize over Holly Robinson Peete. Now he’s back to play again, and kick some Apprentice butt with his healthy brain and heart. A life-long diabetic he is once again playing for a diabetes charity. This time it’s Life Rocks Foundation.

On Having Any Hesitation in Returning
“No hesitation on my part at all. I was excited to do it, I wanted to do it the first time I did it and when I actually did it the first time I wasn’t at the peak of my best health. So this time getting the opportunity with All Stars and with La Toya and everyone that was there and Trace and Penn, these guys are all of them successful at what they do. There is a reason Mr. Trump and his show is a success. He’s a success in real life, in life life. And to be able to learn from that, I went in with no hesitation and realizing that the competition was going to be fierce. We all know each other, we all know the way each other plays, and for me I just went in headstrong and had a great time going there, zero hesitation. I would do it again.”

On Being Nervous About His Health
“I didn’t hesitate for a second… They worked on the brain, the heart, the appendix. Most of the parts are fixed or gone. At this point I went back and I thought I’d feel a lot better. The first time I did it I was pretty sick but this time I felt great. And I really wanted to be there and do it.”

On Having an Advantage as the Only Winner
“The truth is, here is the absolute truth, I actually felt like I had probably a major disadvantage. Because I feel like it’s like you want to call it the Super Bowl Syndrome — when a team comes back that has won it, everyone is gunning for them. But I loved everyone who was on it and listen, as a lifelong diabetic, it’s a great opportunity for charity. I wanted to do it. But no doubt when you’re coming back they’re going firing for you and you’ve just got to be strong and do the best you can.”

On the Biggest Lesson Learned the First Time
“The first time for me, and again I go back to this being a lifelong diabetic and my Life Rocks charity. It was an amazing opportunity. And when you go in there… it’s a strange bittersweet moment because you’re all very much friends and at the same time you’re all competing to win and win big money for your charity and when you get into the board room you hope that you don’t get too badly thrown under the bus. And I learned from the first year I did it, it was an amazing opportunity. And everyone talks about brand but honestly just for the charity itself and as a diabetic to raise hundreds and hundreds of thousands of dollars and open up other opportunities outside of it, it was amazing.”


On Who He Was Excited to Meet
“I went in there I was extremely passionate. My passion is both my blessing and my curse. But I went in there and everyone was in there, La Toya was great, honestly she’s fantastic. She is a unique person because she has a heart of gold and fiercely competitive. We share that same thing. You’ve got a good heart but you also want to be very competitive… I’ve known Trace for a while, Penn, all these people, very, very competitive people. And each of them brought a different winning quality to the table. And I’ve got to be honest with you, very, very, very dramatic season.”


On Gary Buesy
“Gary is a tremendous. He is a tremendously smart human being and a character all mixed into one. And the best part about it is it’s real, it’s sincere. He’s not going out of his way to be it, it’s just what he is. And he’s also very intelligent in his own way.”

On His Biggest Competition
“I look at everybody as massive competition on that show because everyone wants to win. They didn’t go there to lose. And you’ve got to just bring what is your game and pray that it works and bring your A game and pray that it works… And some of them are — I won’t mention any names — are pretty good TV professional villains. And as much as I think I’ve got nerves of steel they can rattle you, they can rattle you no doubt.”

For related stories check out:
Did Bret Michaels Get the Sympathy Vote?
Carolla, Gillette and O'Day Discuss Celebrity Apprentice