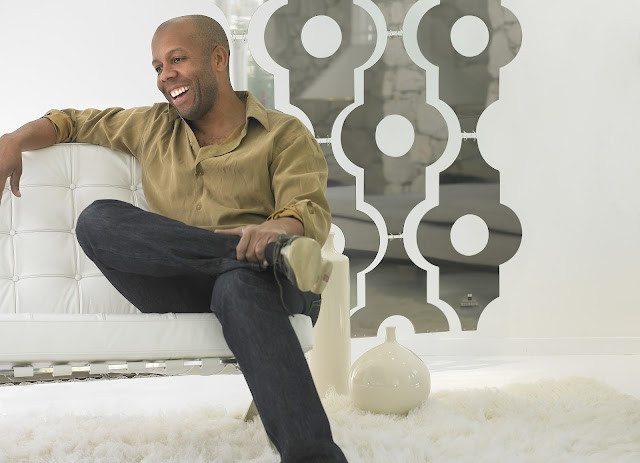 Ken Wingard is one of the designers on OWN's Home Made Simple. He specializes in designs on a budget and has done several kid-friendly projects on the show. A new dad himself, he know how important it is to make a room feel comfy and inviting without breaking the bank.

In a recent one-on-one interview he told us, "There's lots of decorating out there — move the truck and it's all fabulous and all that. But I find that stuff actually very irritating to watch because I can't do that. I'm not about to drop $50,000 on new kitchen cabinets. Any of my friends will tell I'm the cheapest person on the face of the planet and do I everything myself. So this is the perfect show because we go in there and what we do is real. I'm figuring it out. I'm doing it with stuff I find in their garage. I'm showing them how to do it and it's nice. It's inspirational even for me to see people take control of their own spaces and the self-confidence that it builds."

He gave us ten tips for creating a kid-friendly space:

1. Approach kid's design from an adult point of view.
"There's a lot of kids designs out that are, in my opinion, too immature. I was a full blown adult before I was a parent and I want my own and my kid's rooms to be of the same fabric. I don't want to walk into a kids room and all of a sudden have it be so disjointed from the rest of the house and from who I am as a person… So I approach it much more from a sophisticated point of view. My little girls room is sage green walls with white birch trees with pink and blue polka dots floating all around. So it's whimsical for her but it's pleasant for me. But I did this when she was born and she can still have that on her wall until she's a teenager and I'm not going to have to redecorate it five different times."

2. Include the child in the design process.
"I think it's important. We did an episode with three kids and we were making bed rolls for them… and I took the colors that I was doing in the room and I put them on paint sticks for them. And we went to the fabric store and I taught them, 'These are the colors of the room so why don't we look for fabrics that have these colors.' And they loved it. I talked about color and matching and coordinating and they helped stuffed the bed rolls when they were done. So they bought into the whole project and it's very educational for them and it makes the room feel like theres."

3. Let the teens have their way.
"When it's up to the teen years, just let them go for it. They're not going to be around for much longer. Let them have what they want. Make it cool. Make it hip. There are plenty of other battles you're going to have with teenager, what color to paint the room does not need to be one of them…  The truth is you give him that he wants, he feels it's cool. He's going to be hanging out at your house with his friends as opposed to him being off who knows where. So it bodes well for the parents to give the kids what they want in the teen years."


4. Think ahead with paint colors.
"It's important to have a room that's going to grow with your kids so you're not having to re-do it every three or four years. Have a room that is subtle enough so that as your family grows, as you have more kids, you can put the girl in the boy's room and the boys can move to the girl's room and you're not having to repaint… Because it's all great when you're pregnant for the first time and your spending all this time painting the nursery bright pink with daisies, but when you've got four kids running around the last thing you want to do is paint that room on a Saturday. So give yourself plenty of leeway for the future."

5. Stay away from themes.
"That's one of these things where the same rules that apply to adult rooms apply to kids room. You need to go the long distance. You want a room you're not going to be tired of in a few years and the theme rooms really do that. Pick a color palette that you can work with and then add the theme with bed linens, throw pillows. There's some great vinyl decals out there now that just peel right off. Don't start doing the wood nymph mural that you're going to be tired of or the racing car bed that he's going to outgrow because you're just going to regret it."

6. Use egg shell finish for paint.
"Whatever you do start off with easily cleanable paint. My house now, I did fancy, fancy flat paint and my daughter's two and, of course, there are now fingerprints everywhere. So washable paint. Eggshell in the bedroom so you can wipe crayon off easily."

7. Use bold graphic patterns for the walls.
"As far as things on the wall, think modern. Graphic murals are subtle and have longevity that are good. There's a couple of projects on homemadesimple.com that are great. There's learn and play tiles which are basically a grid on the wall using acoustic ceiling tiles painted colors that kids can then put up artwork, they can put letters so it can be an educational thing. I did one project on the show where I got kitchen cabinets and put them in a kids play room willy nill on the wall, and each one with a different color coded for the kids so they would know which on was there's where their stuff goes. It almost looks like a Mondrian painting but it's full storage for the kids."

8. Utilize left over paint to save money.
"Everything in my room was on a tight budget. My mural I did with the dots, it was all house paint we already had around. I added the pinks and yellows for the big polka dots. I got them from the mistake bin at Home Depot, the mismatched paints."

9. Use books as art.
"For the artwork in our nursery, my mom sent me all my old Dr. Seuss books and I mounted them in shadow box frames with push pins. Ao above the changing table it's all framed books. For a baby shower instead of getting a bunch of stuff we didn't need we had a book-based baby shower so from the moment Coco was born she had a full library. So we have a big, old bookcase painted white filled with her books. Which is great for an educational purposes. She's growing up with books so that's her go to when it's time to play. So that's one of the big benefits down the road."

10. Utilize old photos.
"Another thing we did, which was very cute, was I had my mom and my husband's mom send us childhood photos — the ones you get at the photo place with the prop behind you. And we took our daughter to Sears and had the same one done. And so now those three are framed all next to each other. Stuff like that is very inexpensive, it's meaningful, you're getting crap out of the rest of your house and repurposing it. It's really easy to get tied up in the excitement of, especially, the first child and way over do it from an expense point of view."

What are you most passionate about?
"Junk TV. After a day of working and balancing the kid, and we have dinner as a family every night and we put her to bed, and my husband and I can not get to the sofa and our TiVo fast enough. We watch New Girl, The New Normal, Raising Hope, Home Made Simple. A lot of our shows we watch now are about raising kids. It's interesting, the stuff that I used to watch when I was single and or first married, which were all the big fancy design makeover shows, are completely inappropriate for our lives now. I need either to hear funny stories about other families or I want to watch shows that in the two hours while she's napping there's something that I can actually accomplish from that show."

If you could be one pop culture icon from all time and walk in their shoes for one day, who would you choose and why?
"It would probably be Andy Warhol. He marched to the beat of his own drummer. And in that period in New York, what was going on, he took very simple things and made it art. He redefined what that was. So to have that independence and that clear thought and that, 'I'm going to do my own deal,' I think that would be very liberating."

See more of Ken Wingard on OWN's Home Made Simple Saturdays at 9 a.m. EST/PST and check out his website. And after each episode viewers can go to HomeMadeSimple.com for step-by-step instructions about how to make each of the projects featured on the show. And don't miss the HomeMadeSimple.com live Q&A via their Facebook app, Solutions Exchange, on Thursday, February 7 from 6-7 p.m. PST/9-10pm EST.