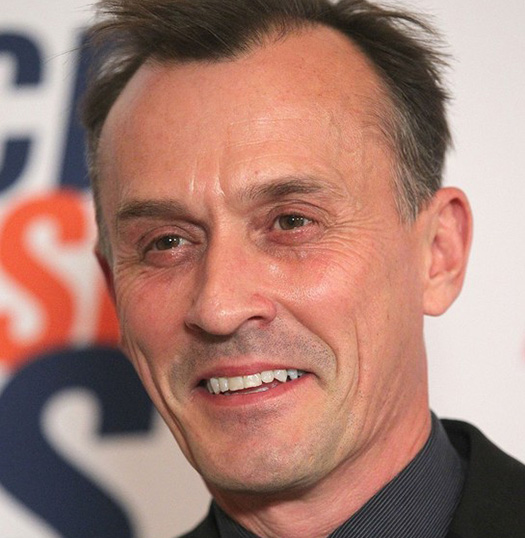 We were huge fans of Prison Break and a big reason for that was Robert Knepper, who played T-Bag, the despicable white supremacist murderer. No one does creepy, bad guy better than Knepper. And so we were pretty excited to hear Robert is coming back to TV as an equally villainous character.

Starting tonight, he will star in the new CW series Cult. He portrays two parts — an actor named Roger Reeves who plays a cult leader named Billy Grimm on the show within a show. In the intricate plot, the rabid fans of the inside show Cult are as crazed as Grimm's fictional followers. When they begin disappearing people start asking questions.

When we talked to Robert in a one-on-one phone call, he was very optimistic about the new series and told us, "I really hope this thing catches on because it's more than just a show about a cult. It's so many different stories in one and I certainly think it's elevating what used to be on CW."

Robert described the cult leader Billy Grimm. "He is just as complex a character as T-Bag. He's magnanimous. He's charismatic. I was channeling Robert Mitchum a lot in this first year. He's very strong and mesmerizing… He's every nightmare you could ever imagine."

He continued, "He's such a rich character. And he's fun and he's got a great sense of strength to him, which I love playing." Robert noted that as a small kid, he was often beat up or chased away for fear of being beat up. Now having risen to fame playing these scary characters, he gets his revenge.

He stated, "It's nice as an adult to say, 'I don't have to live that life. I don't have to go out and kill people or beat people up, but I can sure play it. I can walk into any bar, anywhere in the world and people go 'Whoa!' I'm not a fighter at all, but I can play these guys. So I've got that going on with Billy Grimm."


He recently got the ultimate of compliment as an actor in a very strange place. He taped an episode of The Ricki Lake Show with a group of ex-cult members — two of them had survived the Jonestown Massacre. He was asked to come on to talk about the perspective of the cult leader. He recalled, "This one lady who survived Jim Jones, she got out the night before the other people died drinking the Kool-Aid… She'd seen a clip of the show before I came out and she looked at me right in the eyes and she said to me, 'You nailed it.'" He knew he had done his job.

He continued, "I know why Robert Knepper was picked to play Roger Reeves to play Billy Grimm but specifically for Roger it's because Roger has some aspects of Billy Grimm in him that are magnanimous, that are charismatic, that are inviting. And then there's other moments where if you cross Roger Reeves, he will explode. We're delving into all these rich, psychological possibilities for Roger Reeves. What's his story? Was he bipolar? We've all worked with some real whack jobs in our time. Sometimes with success comes some crazy that goes along with it."

On The Ricki Lake Show, the big question asked was, "Do shows like this actually glamorize cults and encourage people to join them?" Robert replied, "'No.' I'm not advocating that. I'm saying it's a good story. It's good vs. evil. We've had horrible, violent shows since the beginning of time with the Greeks and Shakespeare. This is just another one of those really big dramas with conflict in it and somebody's gotta win and somebody's gotta lose. And I'm the guy that's gonna keep fighting to win and probably will end up in the end that good will beat him."

With all these bad guys on his resume we were pleasantly surprised to hear who Robert would choose as the pop culture icon to be for one day — Spongebob Squarepants. His reason was simple, "He makes my son laugh, which is always great." He also admitted to being good friends with Clancy Brown, who plays Mr. Krabs on the Nickelodeon cartoon and who shared the screen with Knepper on Carnivàle. He stated, "I just love the fact that I know somebody who plays a comic part like that."

Don't miss Robert Knepper on the premiere of Cult on tonight at 9 p.m. EST/8 p.m. Central on CW.

For related stories check out:
An Interview with the Executive Producers of Grimm
Modeling Agent Extraordinaire, Paul Fisher