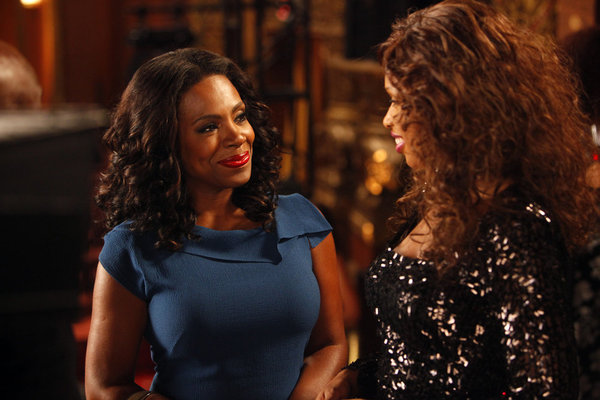 Tonight Smash is welcoming a very special guest to play Jennifer Hudson’s mother. Broadway legend Sheryl Lee Ralph, created the role of Deena in the original cast of Dreamgirls in the 1980s. Decades later Hudson would play Effie in the movie version of the musical. And so it seems like kismet that the two should work together. In a recent conference call interview, Sheryl Lee talked about the experience.

She said she was excited to be doing the show and looking forward to working with Hudson and then she arrived on set the first day to a big surprise. She recalled, “I walked into my dressing room and inside the room was the hugest, grandest, most beautiful arrangement of flowers I have ever seen. In fact they were so big that either the flowers had to go or I had to go. And when I opened the envelope and saw that they were from Jen, I walked over to say thank you and she looked at me and she said, ‘Miss Ralph, you don’t have to tell me thank you for anything because you are all that I ever really want to be.’ I was like, ‘Oh my God. It just made me feel I can't even explain it but I was like, ‘Wow what a moment, what a moment.’"

Sheryl Lee’s character, Cynthia Moore, is not only Veronica’s mom, she’s her manager and a very demanding one at that. Sheryl Lee talked about the role. She stated, “I love this character. This is a woman who is so comfortable in her well-earned Manolo Blahniks that it is a joy just to get to play her.” She mentioned that one the show’s executives compared her to Diahann Carroll’s Dominique Devereaux on the original Dallas. Sheryl Lee replied, “’I take that as a supreme compliment.’ But also I had to stir in a little bit of a mom-ager or two that I've worked with just to make sure she had some authenticity.”

The actress explained the dynamic between the characters. “You know how it is sometimes when you're a strong mother and you raise your child and then your child one day turns around and they are everything that you have raised them to be? Sometimes you have to rethink real quick how do you hold on to what you raised. So I love that dynamic between the two of them. And even when things get a little bit testy there's still that foundation of love. And I'm so thankful to have a character and a relationship written like that especially for women of color.”


She credits her own mom with the ability to play a powerful mother to her. “Because I've had an excellent example of a mother in my life and it's not just a mother as mentor, female mentors in my life. I often write in my book, Redefining Diva, the women that came before me were so wonderful in sharing what they had learned with me that it just helped me in ways that I see coming true now about holding on in times of disappointment, celebrating in times of true happiness. Those are learned things. Those are learned choices, the choice to be happy no matter what is going on. I have a great mother in my own mother, a strong West Indian woman, Jamaican to be exact, and I had an incredible grandmother from the south. Both sides of my family were full of the most incredible women. So I really think my ideals of motherhood come from the mothers that have been placed in my life.”

Sheryl Lee recalled how excited she was to get the call to be on Smash and was equally enthusiastic about arriving on set. She described the stage. “In L.A. you walk into these sparkling stages that have their own ghost and all of that but we were literally shooting in a tricked out warehouse in Queens. If you would drive by this building you would never know all of that magic was taking place inside of those doors… It was an intense schedule, a really intense schedule and it was all day baby. But I did love it. It felt good. It was like a hot shot of adrenaline and then you got to sing, too. Oh it was great. Great wardrobe, great set, great songs, great cast. I really enjoyed it. I enjoyed it so very much.

And despite her earned reputation as a theater diva, she remains humble. “I wake up every day just trying to do the best I possibly can do in life... I wake up trying to be as nice as I can for as long as I can to as many people as I can because the same butt you kick today you may have to kiss tomorrow.”

And if you’re looking to learn from the best, here’s some advice from Sheryl Lee. “It's not always easy because there's so often a lot of people around you want to tell you why you should not pursue your dream. So it sometimes takes a great deal of heart to go for it, to try, to practice, to learn, to discover new things. So I say if you can do that as a young person that's what's going to give you the foundation you're going to need to carry on in this business because this can be a lowdown rough business baby and it is not for the faint of heart.”

For related stories check out:
Bailey Buntaine Talks About Bunheads and The Middle
Our Picks for the 2012 Creatve Arts Emmys