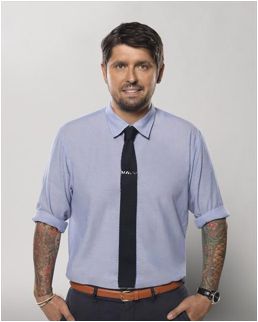 The Taste is a cutthroat reality competition show in which four celebrity food personalities must choose the best talent simply on the flavor of one spoonful. Perhaps the toughest mentor is chef Ludo Lefebvre, the classically trained French culinary master. But not only does the 41-year-old hope to influence his contestants, he’s proven to be a man of his word in the pressure cooker that is reality TV.

In a recent exclusive interview, Ludo explained that he hopes to serve as an instructor to the members of his team, “You can see in the competition I’m very involved with cooking and all the time I’m with them I only show them new things. I don’t want to let them cook what they want. I want to teach them new technique. I want to give them inspiration.”

He continued, “I’m not looking to ask them just to cook a spoon and I’m tasting the spoon and saying, ‘Oh, a little more but, a little more but…’ No. I teach them A to Z new things, new techniques. It’s very difficult. I have one hour. But like I say, I love to teach. I want to give them inspiration to show them new things, new technique. I want to. So I help sometime, sometime I torture them too.”

One contestant that he’s assisting didn’t even make his team. In fact, Renee, was eliminated in the first round of competition. But Ludo immediately regretted not selecting the culinary instructor who had quit her job to try out for the series and offered an opportunity to work for him. And it turns out, it wasn’t just an empty gesture to impress TV viewers.

As Ludo recounted, “I followed up with her… I’m opening a new restaurant in a month and a half and… I did an interview with her on the phone. I liked her. I checked her reference and now she’s coming… to work three days with me in the kitchen. And I’m going to see if I like her — yes or no. So I flew her from Chicago and she’s going to stay three days with me here in Los Angeles. So we’ll see.”

Ludo was clear that he isn’t doing this for the sake of ratings. “I’m a man of my word. I proposed a job for her not just for TV. I really like her and I love where she comes from. She quit her job, too, for coming here and I was feeling so responsible because the spoon was not that bad. She was definitely in the top ten spoons and I don’t know why I don’t pick her.”

In fairness to Ludo, the stresses of competition are not easy. As he conceded, “So many spoons you try and you’re always waiting for something better. And that’s tricky. So I was feeling so bad because she was one of the best spoons that day. So I proposed her work with me. That’s it. Done… I regret nothing.”

Words to live by. Tune in to The Taste every Tuesday night at 8 p.m. EST/7 p.m. Central on ABC.