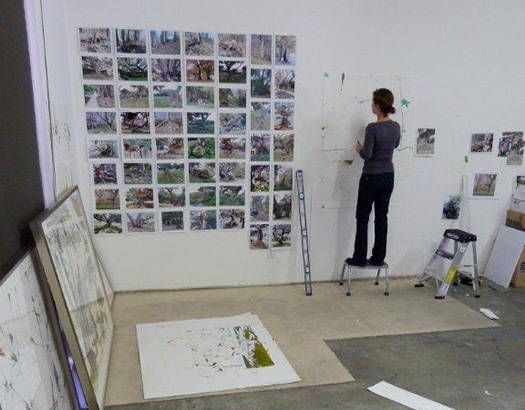 We had the pleasure last week of rubbing elbows (well figuratively because we were on the phone) with pop culture royalty. It all started out as a simple conversation with an artist, Jill Lear. Jill creates these amazing images of trees. Each one named with the exact latitude and longitude of the oak or maple she is capturing. That's right, you can actually Google the map points and see the tree.

And while we find the images beautiful and a little haunting, we admit we were a bit more fascinated with her family history because Jill is Adam West's stepdaughter. Yes, Batman, Adam West — the pop culture icon to end all pop culture icons. And so we talked to Jill about her paintings, but we also could not resist asking her about growing up with Batman.

She remarked, "It was pretty great. My mother is French and she was born in Leone. And the French are not like Americans. She didn't understand what this was all about, she was like, 'Who are you? This doesn't mean anything to me.'"

She continued, "Growing up it took me a long time to realize how much people loved him and how interesting he was to them. Like any star's kid will tell you, it's your family. The older I get the more amazed I am that he is so loved by his fans. It's so wonderful."

Jill is always surprised to find the influence Adam West has had on people's lives. She revealed, "I sometimes get to read the fan letters and it's surprising. Detectives write to him. Lawyers write to him. Policeman [write to him, saying] you influenced us. This is why we became who we are. And that must be such an incredible thing for him to realize that he's had that much influence."

Adam West is also an artist and so she has that in common with her step dad. But she said their styles could not be more different. While Lear takes a very deliberate approach to finding her subjects, documenting them and their space and capturing the essence of the place they occupy, her step dad is a little freer with his style.

She said, "He is completely genius and fearless with his work. You can hand him whatever art supplies are in arms reach and give him a piece of paper and he can do these, incredible — fantastic is the word, and I mean it literally — pictures. He tends to do caricatures of the Batman characters but they're extraordinary. They're pretty complex and a little dark and wonderful."

So what has she learned from him as an artist? "Spontaneity and fearlessness. I try to put that in my work but I'm actually much more methodical and disciplined so I admire that. And I take from him also in life in general is his work ethic. He works so hard, it's ridiculous."

But as if that weren't enough Jill told us that Batman is not the only pop culture legend in her family. While Lear may be a somewhat common surname, there is only one Lear, that is famous worldwide for his technological achievements. Her grandfather, who was an inventor and businessman, not only built the Lear Jet, he also was the man behind the eight-track cassette. Just saying the word calls to mind the exact songs and the specific moment they paused in the middle of a line while the player skipped over to the next track. Wow. What a family!

Like all our interviewees, we asked Jill what she's most passionate about and her answer was not surprising. She stated, "Art and food and fashion. I couldn't take away any one of those from my world. I love fashion (Note: she studied at the School of Haute Couture in Paris as a young adult). I love French food, that's my mother. And art is who I am. And those are my three things that sustain me."

When we asked Jill which pop culture icon she would be for one day, she hesitated. But when we gave her permission to state the obvious she said, "My stepdad. I think that would be awesome. Because I would love to understand what that was like."

Jill's exhibit will be up through February 16 at the Gallery Shoal Creek in Austin, Texas. Read more about her and see her work at JillLear.com.