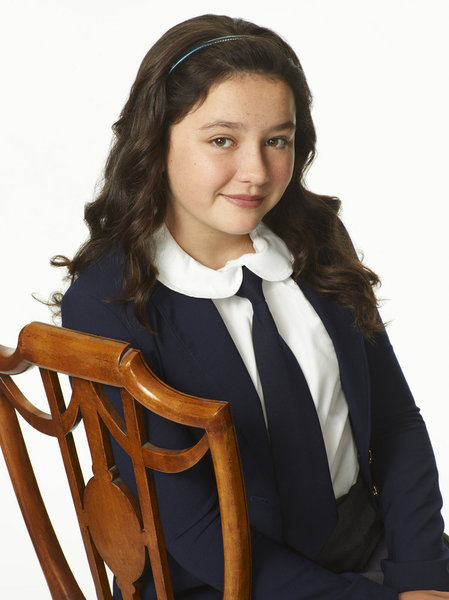 Everyone’s heard the tales of actors who weighted tables or drove taxicabs, struggling for years until they got their big break. This is not one of those stories. That’s because Amara Miller admittedly was lucky when it came to finding success in Hollywood. In a recent exclusive interview she explained it all.

As the 12-year-old actress recounted, “My aunt, Carrie, who lives in L.A., she was at a Valentine's party and heard that Alexander Payne, the director of The Descendants, was looking for a 10-year-old girl to be in his next movie. And she's like, 'My niece, Amara, she's 10.'  So she calls up the next day and asks do I want to audition for a movie and I thought, ' Sure why not? That would be really fun.' So I put myself on tape and sent it to Alexander and he said that within 20 seconds of the tape he knew that I had the part. It was really exciting.”

The result was a breakout turn as George Clooney’s youngest daughter, Scottie King, in one of the hottest movies of 2011. With that came instant success and changes at home in Monterey, California. As Amara explained, “At home a lot of kids were treating me differently. Some jealous kids were being a little meaner. People wanted to be my friend a lot more. I have definitely learned how to tell people apart, definitely who your real friends are, who are friends with Amara Miller and who are friends with the girl who was in 'The Descendants.'”

Living outside of Hollywood with her family has certainly helped ground the actress as her career continues to take off. She followed up the Oscar-nominated film with a role in the new Oval Office-based new sitcom 1600 Penn.

And again she was able to bypass some of the usual rigors of Tinseltown tryouts. As Amara recalled, “It was basically just a normal audition process. Except the only thing is I didn't get an audition, the director saw the film and thought I was great. So he brought me in for testing, when they see girls and take their five or six favorites and they test them to see who is the best of the best. And that's how they do things. So I didn't audition, he just called me straight in for testing.”

Not surprisingly she landed the role of first daughter Marigold Gilchrist. Amara described her onscreen persona, “Marigold is a spunky teenage girl, who is really strong and confident. Those are two things I definitely admire about her. When you keep watching the show, you see a whole other side to Marigold develop especially with the other relationships that she develops with the other characters.”

Behind the scenes, Amara is forging strong bonds with her castmates, including Bill Pullman, Jenna Elfman and series co-creator and star Josh Gad. And it turns out the ensemble is as entertaining behind-the-scenes as they are on camera. “Everyone is absolutely hilarious,” Amara revealed. “Everyone is so funny especially Josh Gad. He improvises, every single take he comes up with something new and funnier material to add on to his written lines. Every time. I don't think I've filmed one scene with him where we both haven't busted up laughing. He is just a hilarious guy and everybody else is great but he is definitely really funny.”

When she’s not working this normal kid likes to cook, bake, read and enjoy the outdoors. She is also involved with the Plastic Pollution Coalition, which she described as “a foundation that is trying to spread the word about the dangers of plastic. It can harm animals and the environment. And it's definitely really important to me.”

But performing is her greatest love. Amara confessed, “I'm really passionate about acting. It is definitely what I want to do for the rest of my life and I think it's really, really, really great and fun and inspiring. I think it definitely inspires a lot of people that maybe under estimate themselves and don't think that they can do. I think it gives a little bit of strength to some people.”