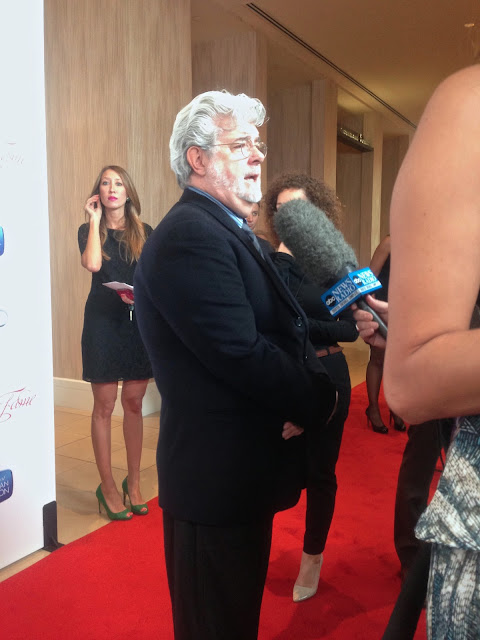 See that guy up there, yup. That’s George Lucas alright. The man who changed our lives all those decades ago when we sat in a dark movie theater with our brother and were transported to a galaxy far, far away. While we didn’t get to interview him last week, it was still mind blowing to stand just a few feet away from the guy who created Star Wars at the Academy of Television Arts & Sciences Hall of Fame ceremony.

He was there because his pal, Ron Howard was among the inductees. Although Howard has become an Oscar-winning film producer-director, he obviously started his career in TV. By the time he was 20, he had two hit series under his belt — The Andy Griffith Show and Happy Days.

As Will Arnett, who presented Howard with his honor the other night, pointed out, “He was a legend by the time he was a teenager… We could have inducted him into the Hall of Fame 30 years ago.”

We spoke with Ron, Al, Les, Bob and Philo T.’s great-granddaughter, Jessica, as they walked the red carpet. Ted Danson, Mary Steenbergen and Chris O’Donnell also dropped by. But the highlight of the night was, without a doubt, when TV mom worlds collide and Mrs. C. (Marion Ross) stopped to have a little girl talk with Mrs. Carol Brady (aka Florence Henderson) right before our very eyes. It was a real life crossover episode that we’ll never forget.

Here are some of our favorite moments from the evening: