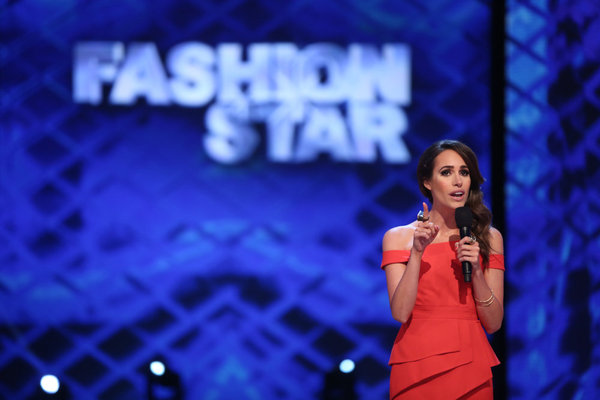 Season 2 of Fashion Star premiered last week and it’s every bit as good as it was last year. When the series debuted it had to prove to the world that it was not just another Project Runway rip-off. And it did that with flying colors. Now the show needs to prove it has staying power. And so with a few tweaks and some big numbers right off the bat, it delivered and promises to be an exciting walk down the runway for the contestants. In a recent conference call Executive Producer Ben Silverman and new host Louise Roe talked about the changes and what’s coming up in the weeks ahead.

One of the changes that took place this time around is the role of the mentors. Ben explained, “We needed to get our mentors more heavily invested and connected to the process and also create a little bit of a dynamic between the buyers and the mentors. So we brought them physically closer together [on set].”

He continued, “But the big change this year is the mentors actually have teams and are actively participating with specific designers week in, week out and giving them not only advice but also working with them to try and lobby and get the stores to buy their products and their clothes. So it’s really a more dynamic and dramatic show with deeper rooting interests that connect Jessica Simpson, Nicole Richie John Varvatos more profoundly to the contestants.”

As for the buyers, two have returned — Terron Schaeffer from Saks Fifth Avenue and Caprice Willard from Macy’s. But this time H&M is out and Express is in with buyer Erika de Salvatore. And they are serious and ready to spend. Right out of the gate there were bidding wars and one lucky designer walked away with the highest number in Fashion Star history (and the max amount a buyer can offer) — $200,000. Hunter Bell received two maximum offers for her mini dress from Saks and Express, but she ultimately chose the Fifth Avenue store.

Ben explained why the element of the buyers works. “When you see this season, it’s even more competitive with the buyers. The audience is more and more interested in real-world dynamics and shows that have real-world results and application. You’ll see that level of competitive giving and buying is exceptional and starting right off in the first episode where we have multiple bids on different designers from the retailers and stores.”


Louise talked about another change this season that has viewers excited. “Instead of waiting until the end of the show to [purchase the designs] you can buy them at home as soon as the buyers buy them. So it’s just really awesome because, as we all know, people watch TV in a very multiple screen, immediate interactive way now. It’s more about young women and men being able to get their hands on something physically as they’re watching it. It’s just awesome. That amped up the excitement and the suspense and, as Ben mentioned, the drama. There was definitely a lot of drama on the stage, which was brilliant.”

Now that the show is in its sophomore year, designers knew how much was at stake and came out of the woodwork to be on the series this time around. Ben talked about the level of talent, “Because people saw the clothes for sale and in store and saw three or four of the people from last year not just sell through the store but continue to sell and expand their line, we had an incredible pool of talent. Everyone from the F.I.T. [Fashion Institute of Technology] boy genius to a woman who was actually working at Elie Tahari and quit to come go on the show.”

He added, “So there were accomplished people within the fashion world already who just had never been able to get any traction on their own brands, who have all the promise and opportunity of this next generation of designers that we’re seeing slowly emerge over the past three to five years. So it was an amazingly diverse group of people from every state in the country and internationally who tried out for the show this year. And you see it reflected in the clothing — how good it is and level of quality and also in the amount of money being spent by the buyers this year because of their belief in the designers.”

And even the stores were vying for a spot on Fashion Star this season. Ben revealed,  “There was a ton of retailers who wanted to get involved with the show. [They] recognize that the show was an incredible proving ground for new designers and they’re constantly looking for new voices and new creativity. But they don’t have an A&R industry like the music business does as profoundly so this show really, really provides them with a canvas across the artistic spectrum of designers.”

He went on, “Macy’s and Saks have been with the show from the beginning and are incredible partners and really know their business. Express was new this season and just upped the game big time and really know their consumers so well. It just has been fabulous to have the three of them. And specifically there’s ten others who were desperate to get involved, but we really felt these three were the best.”

And so what can viewers look for in the weeks ahead? Well it seems since the designers are already so accomplished that the real challenge is in developing a brand. Louise expanded, “For some of them it was a learning curve on actually what’s more marketable and commercial, what is going to sell and how do you balance that with your own core aesthetic and the things that you believe in. Whereas other designers already have that down pat and completely blew it away. So they took a lot of advice not just from their team mentors… The feedback that they got from the buyers was just gold dust in terms of progressing their brand and taking negative as well as positive feedback.”

Ben added, “From Jessica Simpson, Nicole Richie, John Varvatos, Macy’s, Saks Fifth Avenue and the Express you’re getting the ultimate boot camp in not only design development but brand development. What is so fascinating about fashion specifically is Jessica Simpson’s line is leveraged off her celebrity brand and it’s called Jessica Simpson. But John Varvatos who started cutting and tailoring and never was an actor or singer his brand is called John Varvatos also. That relationship of brand to personality in the design world is more profound than in any other industry. Google is not called Sergey Brin and Apple was not called Steve Jobs. I think it is so profound within the fashion world that you connect your personality to the brand and that also creates authenticity.”