Our Archive Interview with Tom Bergeron 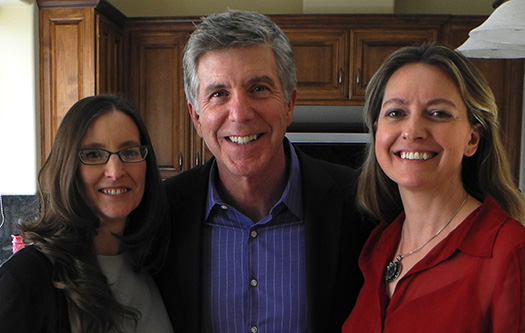 Dancing with the Stars is back for another season and we're excited. And not just because of the dancing or the stars. Sure we are transported back to childhood each time DoHam does a spin on the parquet and we are rooting for Andy Dick to prove he can follow through and not mess up. But mostly we're looking forward to the season because we love ourselves some Tom Bergeron.

As you know, we're Boston girls, born and bred and so is Tom. We were glued to the set each weeknight as he picked the numbered balls on Lottery Live and we were riveted as he interviewed New Kids on the Block or Jimmy Carter on People Are Talking. We've watched him rise through the ranks of Hollywood Squares, America's Funniest Home Videos wall the way up to DWTS.

A few months ago we had the honor of sitting down with Tom for a four-hour oral history interview on behalf of the Archive of American Television. If you never watched one of these interviews, do yourself a favor and check this one out. You'll be glad you did. And if you have seen some of these interviews, don't miss this one. It's unlike any other Archive interview on the site. Tom was funny, charming, insightful and endearing… and, shockingly, little bit of a potty mouth. Here are a few highlights:

On Interviewing the Three Stooges
When Tom was a 16-year-old aspiring radio host, he got the crazy idea to call the Three Stooges, since he was a big fan. Low and behold he got through. He tells the story here.

On His Early Days on People Are Talking
We got to know Tom as host of the local 1980s daytime talk show People Are Talking — or as the staff nicknamed it "Nuts and Sluts." He talks about the Emmy-winning Torrets episode, interviewing President Jimmy Carter and his Chicago counterpart Oprah Winfrey.

On Standout Moments from DWTS
Tom tells the stories of Marie Osmond fainting and Boo-Gate with Sarah Palin along with a few other highlights from his years on the show.

On the DWTS Judges
He calls Len Goodman "the crusty stickler," Bruno Tonioli, "two emotions shy of living at Pixar" and Carrie Ann Inaba "the girl next door in the neighborhood you wished you lived in." See what else he has to say about their judging style.

On Appearing on Star Trek Enterprise
Some people may not know it, but Tom is a big nerd. And he can rattle off the Star Trek terminology to prove it. So when his good friend Whoopi Goldberg brought him to the Next Generation set he said "it was a geek fest for me." And he was over the moon, so to speak, when he was cast in a guest spot on the intergalactic series Star Trek Enterprise. He talks about how that came about.

On His Miss America Faux Pas
Tom Hosted the Miss America Pageant in 2004. He, as expected, did a great job and the audiences loved him. He was bound to be asked back the next year until a publicity tour story went terribly wrong. We won't ruin it here but it has something to do with a neck massage from a contestant.

On Hosting the 2008 Emmys
During the course of the interview Tom kept eluding to the 2008 Primetime Emmy hosting debacle where he, Heidi Klum, Ryan Seacrest, Howie Mandel and Jeff Probst shared hosting duties… and crashed and burned. Here's the story in Tom's own words.