Get Ready to Meet the Ready for Love Coaches 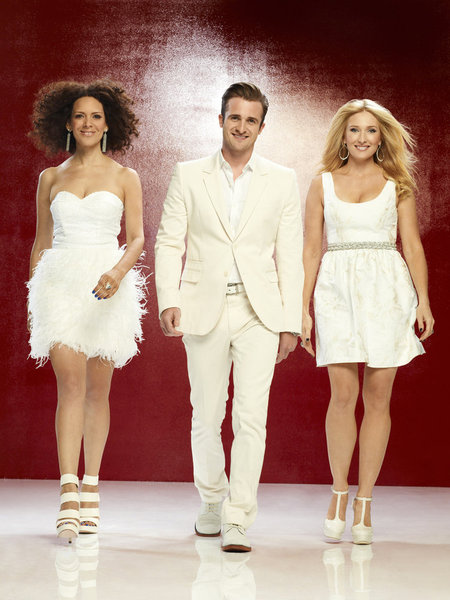 It’s hard to flip to a cable channel without stumbling across yet another reality TV show where people are looking for romance. But NBC is promising a new twist on what might seem like a tired genre in their upcoming series Ready for Love.

The show follows three men as they embark on a quest to find true love with the help of a trio of matchmakers, coaches and relationship experts — Amber Kelleher-Andrews, Matt Hussey and Tracy McMillan. In a recent conference call interview the mentors explained their personal approaches to helping Texas businessman Ben Patton, California musician Tim Lopez and Florida entrepreneur Ernesto Arguello meet their true loves.

Kelleher-Andrews is a world-famous matchmaker and relationship expert who hosts her own radio talk show, The Rules of Engagement. Helping people find romance is in her blood, as she explained, “I come from a family business of matchmaking. I like to say, ‘I'm the fly on the wall of over 40,000 dates.’  So I'm actually the CEO of company called Kelleher International. It's a professional matchmaking firm, but it's extremely personalized. It's been my mom and I for 27 years. She founded it. I haven't been working for the 27 years, but for probably 17 or 18.”

As for her working style Kelleher-Andrews notes, “I engage with both the man and woman in real current matchmaking. So that's why I'm the fly on the wall of the dates. I hear his perspective. I hear her perspective. I go into every detail of every single date.”

She also covers a broad spectrum of clients, which she described, “I learn the does and don'ts of dating from every age range, from 20's, 30's, 40's, 50's on up and in most of the major cities of the United States, as well as overseas. So I find dating patterns in people based on gender, based on age, based on their community.”

Her copious experiences gives her a unique perspective on the manner in which people approach dating. “It's really fascinating to work as a matchmaker and to hear both sides, and to be able to coach them along the way. And not only up to the point of meeting their match, but afterwards through family and babies and so on. So I come from a professional standpoint of matchmaking.”

On the contrary, McMillan tackles the craft for a very different point of view. She acknowledged, “I'm the best friend matchmaker. I come from the standpoint of a caring friend who's going to tell you the things that your real friends are possibly afraid to tell you because you might get mad. But also come from a loving perspective.”

To McMillan evaluating the way you look at finding love is about more than just the end game. As she admitted, “My philosophy is that it's not about getting the guy, it's about opening your heart wide enough that the guy can walk into your life. And that you're ready for him.”

“Ready to Love’s” male matchmaker Hussey is a motivational speaker by trade. As such, he recounted, “I really have come from in most more part a coaching background. So, I work with a huge amount of people on the strategy that they have in their love lives.”

It’s Hussey’s opinion that not everyone is ready to jump into a relationship when they feel like it. As he pointed out, “I come from a perspective of saying, ‘There are things that people are doing wrong, there are bad habits, there are blind spots.’ And sometimes even when you have the perfect person put in front of you, [there are] still ways that you may sabotage that with things you are already doing."

For his part, Hussey comes to the table focused on the manly side of the equation. As he admitted, “Because I've come from a background of having coached guys before I ever started working with women, I coached over 10,000 men in their love lives. What that did was it allowed me to bring a very male approach to this. To say, ‘Look, there is a language that you need with the men in your life.’”

Hussey added, “I don't know that because I'm a guy. That's like saying, ‘If you're a woman you know all women.’ But I have coached 10,000 of them, and I have a perspective that most people don't have when it comes to getting women to understand men.”

Surely there’s something to be learned by everyone who tunes in. Catch the series premiere of Ready for Love on Tuesday, April 9 at 9 p.m. PST/8 p.m. Central on NBC. And follow the progress online at Facebook.com/NBCReadyForLove.