The Voice Contestants Talk About Choosing Their Coaches 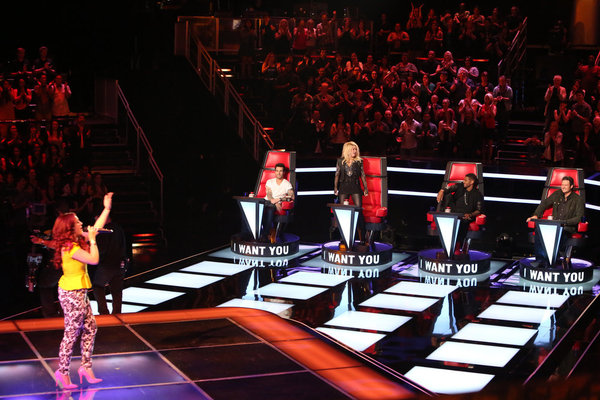 The Voice is settling into its fourth season. New coaches Usher and Shakira have infused some new energy into the show, but it still has the element that sets is apart from other singing shows — the blind audition. And during that blind audition, many of the contestants have the opportunity to choose their coach, when more than one turns around their big red chair. In a recent conference call some of the contestants talked about why they made the choice they made.

Team Shakira — Monique Abbadie
Monique Abbadie got all four judges to turn around after her rendition of Shakira’s “Loca.” It was obvious to even Blake, Adam and Usher that she should choose her idol and she did. Although Adam did offer to give her $100 if she picked Blake instead.

Monique said, “Ever since I knew that Shakira was going to be a coach I inclined more towards here because of the fact that I am a fan of hers. I’ve been a fan since I was a very little girl. But, yes, there was never a doubt in my mind that I would go with her. Of course, being in front of such amazing artists, such as Usher and Adam and Blake, it does go through your mind, “what if.” But, no, I would never let my girl down, I love Shakira and I’m so glad to be on her team.

She also commented on the other coaches’ reactions to the obvious choice. “I had never seen that on the show. I’ve been a viewer of the show since Season 1 and it was very interesting to see them all point at Shakira but I’m glad they did because she really, really fought for me and she really had that amazing chemistry that I felt. So I’m excited.”


Team Blake — The Swon Brothers
The country-singing brothers from Oklahoma seemed a natural fit for Team Blake. And they knew they would pick him if given the option, but Shakira and Usher did give the pause. Colton recalled, “Seeing the other coaches turn, you think you have it all down and you’re ready for an answer but, when you actually see interest from other people it’s very flattering. But we know we got to stick to our Oklahoma roots. There was just no question about it.

Zach added, “Our fan base that we have probably would have shipped us from Oklahoma if we picked anyone else.”

Team Usher — Michelle Chamuel
Returning for a second time to try for a shot on The Voice, Michelle Chamuel may have lucked out that Usher was now a judge. She went in thinking one thing, but changed her mind in the last minute. She admitted, “When I first got up there, honestly, I thought if Adam turns early, I’m going to pick him. And so [I] did have this plan. But they all started talking and it wasn’t really a logical thing that made me pick Usher, it was just a really intense clear gut feeling It was almost like a hand inside my gut pointing toward Usher just like a pull. And I’m learning to trust myself and if I could ever hear that voice loud and clear it’s now. So, definitely a gut thing. He’s amazing. You can’t go wrong picking anybody up there.”

Team Blake — Holly Tucker
Blake won the battle that raged between all four coaches for Baylor University singer Holly Tucker. She was only seconds into her performance of “Make You Feel My Love” by Bob Dylan when Adam, Shakira and Usher turned their chairs. Blake followed soon after. And although she considers herself a country singer choosing Blake was not a done deal in her mind. Adam said he was scared by her cowboy boots because it meant he needed to “fight Blake.”

She stated, “In the beginning I was toying around several ideas. Obviously Blake was first in my mind and Adam was a great choice too because they both have experience on the show. And so when I got on stage and then I was hearing their comments back to me, one that really touched me probably the most was Shakira. “Her comment about how before she could even see me, she heard how honest my performance was and that’s the message that I want to give. When I sing for people, I just want them to know that I’m being completely genuine and in the moment and my performance is completely for the audience. But in the end going with Blake was always where my heart was going to lead me because I am country and he’s country and he knows that world the best. So I had to go with him.”

Team Usher — Taylor Beckman
The one-time Olympic gymnast took home music gold when she chose to be on Usher’s team. The 17-year-old had to choose between Shakira and Usher after her performance of the Rolling Stones’ song “I’m Going Down.” She said, “I was very taken back by how convincing Shakira was. It was a difficult decision. She was very real with me but at the same time, so was Usher. And at the end of the day, I’m R&B and I think Usher can take me the farthest.”

Team Adam — Warren Stone
Warren Stone had to pick between Adam, Shakira and Blake after singing “Colder Weather” by the Zac Brown Band. Everyone was a little surprised when the country singer went with Levine over Shelton. He stated, “They tell us time and time again to just go with your gut and just talking with them after the chairs turned and whatnot, there were just a connection. And I really felt that he would give me 110%, which he has. He has been phenomenal thus far and I’m really excited for what the future’s going to hold.”

Watch The Voice on Monday and Tuesday nights at 8 p.m. EST/7 p.m. Central on NBC.

For related stories check out:
Daniel Rosa Gets a Second Chance on The Voice
Contestants from The Voice Discuss the Difficult Battle Rounds