Bill Kripke Talks About Revealing All on Revolution 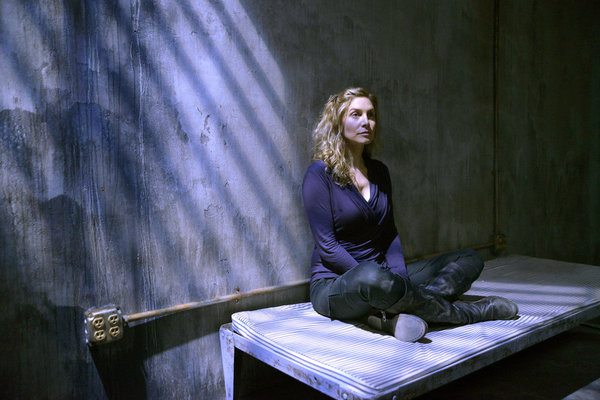 It seems like the list of post apocalyptic TV shows is never ending lately. And while Revolution might not be packed with zombies or aliens like some of it’s competitors, it delivers on the drama front. Having just started the second half of its first seasons, the series is doing what so few have done before — explaining the details of the show’s backstory before the first 22 episodes have even aired. In a recent conference call interview showrunner Eric Kripke talked about that critical decision.

He talked about what viewers can expect as the second half of the season continues to unfold, “I really favor in a really aggressive red-blooded pace of storytelling. Endless mystery is not really my [M.O.] and anyone who's watched any of my shows will know that.

Last night’s episode was the perfect example of that according to Eric, “Rachel reveals pretty much every single thing there is to know about why the blackout happened and every time I watch that scene, and she's brilliant in it, but that scene's a hard swallow every time because you're like, ‘Wow we're just saying it.’ And it goes against many of your baked-in sure weather instincts are not to have the scene that reveals every single thing in three minutes.”

It was one of the big-name Co-Executive Producer’s that helped clarify what the team needed to do. As Eric recounted, “The reality is Jon Favreau was hanging out with us in the writer's room and we were discussing the problem that as a character Rachel knew why the blackout happened and she was back in and among heroes, she wasn't captive anymore. And we were really wrestling with the question, ‘Well why wouldn't she just tell them?’”

Eric continued, “Then Jon who came in and was able to provide much needed perspective. [He] just looked at me he was like, ‘She would tell them, so have her tell them.’ And I said, ‘Yes you're right. You're right she would say it so she has to say it.’ And so she does.”

And with that the entire basis of the series was clarified. As Eric noted, “We reveal really why the blackout happened but the card we have up our sleeve is the explanation really opens the door to much greater story possibility.”

But giving away all of the background doesn’t mean the future of “Revolution” is doomed. As Eric acknowledged, “I don't think we box ourselves in a corner. We open a door to a whole new world and then we ask more questions. For me the story was never about what caused the blackout. For me the show isn't just based on one particular mystery. It's based on these characters and this world and this transformed landscape that they have these adventures in.”

Still he conceded that answering the show’s central question was a bold move, “It's risky and it's surprising that but I think it turns out okay because there's so many other storylines about the characters — who they were. We ask a few more questions. We pose a few new mysteries.”

To top it all off,  he revealed, “Through the end of the season, we answer most if not all the questions that are being posed. And then we start asking new ones but that is as is my way.”

That’s just one of the reasons that Revolution has managed to set itself apart from other "event programs" like Walking Dead and Falling Skies. But Eric humbly chalked a lot of his success up to luck, remarking, “Let me preface this by saying any writer who knows why his stuff works is lying. I have my theories but mostly I'm just grateful that people seem to be connecting with it. And I'm greatly appreciative that they're watching.”

Eric continued, “We try very hard to put the genre on the backburner and put the characters front and center. And our focus in the writer's room is not what's the trippy mind-bending concept, although we certainly love those. Our focus is, ‘Well how do those concepts bring out new dimensions of our characters and how do we make it as emotional as possible and how do we make these characters as fraught and complicated and tortured as possible?”

Tune in to Revolution to learn the answers to those questions and more every Monday night at 19 p.m. EST/9 p.m. Central on NBC.