Relive a ‘Warm Memory’ with the Toy Hunter 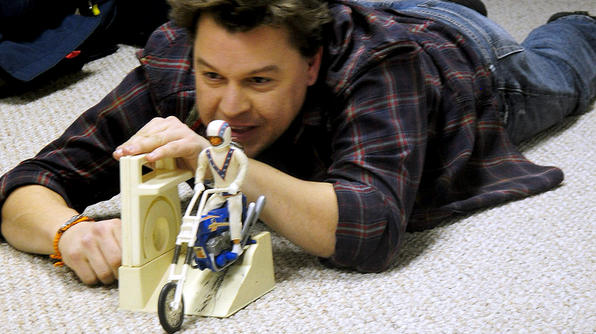 There’s nothing we appreciate more than someone who has a passion for pop culture. So it was a blast talking with Jordan Hembrough, the star of the Travel Channel Show Toy Hunter. Jordan has built a career seeking out the playthings that made our childhoods special. In a recent exclusive interview

Jordan described the most valuable find he’s ever discovered, “That probably has to be a prototype for a vintage Star Wars figure. It was an original wax sculpting for a character by the name of Boba Fett. He’s from The Empire Strikes Back and all these action figures and toys they start out as wax sculptings and prototypes. And this one I bought for $16,000 and actually sold it to a collector in France for $65,000. That was pretty valuable. And it now resides in the sci-fi museum in Paris. So it’s funny, that old cliché from Indiana Jones where he’s screaming, “This should be in a museum.” It was funny because this really did end up in a museum so everyone can enjoy it which is great.”

But that wasn’t the most unusual discovery. Jordan acknowledged, “I do a lot of pop culture memorabilia and I do a lot of off the beaten path kind of stuff and I found a bunch of pins from the 1950s that were aimed towards greasers. This was all during the American Graffiti era and these were all pins that they would wear that said, “Down with the man” and “Be cool” — basically these pins that were underground, home made that defied authority that kids wore in high school. It was really funny.”

Having a TV show has made the search a lot easier. As Jordan noted, “Right now a lot of people are contacting us through our website. We buy and sell toys online. Hollywood Heroes is the name of the company. And right now we’re getting about 500 emails a day so I sift through that and there’s a lot of people contacting us on the website saying they want to sell toys or buy toys. We also have a lot of people going to TravelChannel.com and they’re going to casting for the show. And they’re contacting the show through the network. And all those emails are being filtered over to us as well. So it’s a lot of different ways that we’re getting the information right now.”

And thanks to the show, Jordan has been entertaining a long list of celebrity guest. He recounted, “We kicked off the Season 2 opener with Gene Simmons from Kiss and Gene contacted us looking for something. We have Danny Bonaduce from The Partridge Family coming up, which I’m very, very excited about. We’re in talks with Butch Patrick from The Munsters. And we might have something on tap with Lara Spencer and Josh Elliot from Good Morning, America! who are good friends of mine as well. So it’s really going to be a celebrity studded cast this season. And what really makes it special is that all these celebrity guests are actually passionate toy collectors and pop culture fans as well. And that’s really what makes it so enjoyable. They love what I love and we’re sharing this passion together.”

But any thing is possible — especially if they caught an episode and got caught up in Jordan’s enthusiasm for his job. As he acknowledged, “I was always tell everyone, they say, “Describe Toy Hunter in a word or two words.” And I tell everyone, “Toy Hunter is a warm memory.’ It’s a warm, fuzzy memory from when you were a child. And it’s a great way to tune in for a half hour on Wednesday night, or an hour if you want to watch both of the episodes and let yourself get taken back to a simpler time. Just have that good warm memory.”

Who wouldn’t want to experience that? Tune in to “Toy Hunter” every Wednesday night at 9 p.m. EST/8 p.m. Central on Travel Channel.