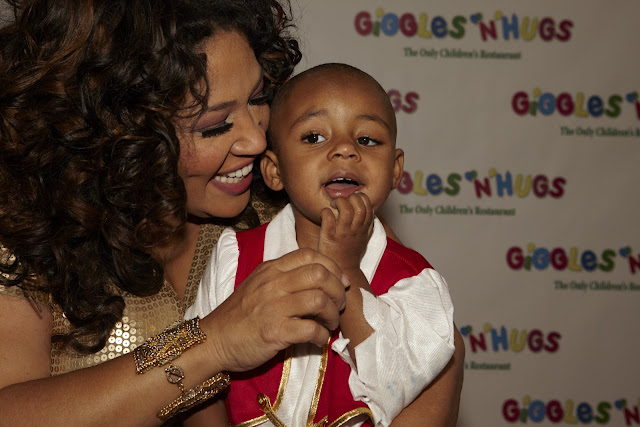 Raising Whitely, which premiered April 20 on OWN, follows the life of actress/comedienne Kym Whitley, who got a surprising phone call from a hospital one day about a year and a half ago. They had a baby for her. Only thing was, she wasn’t planning on adopting a baby. She had an hour to make the decision or the infant would be placed in the foster system. She did what any kind-hearted, self-sacrificing person would do. She took him in and got the help of her “Village” of family and friends to raise Joshua. We caught up with Kym and heard her story in her own words.

Kym was born in Cleveland, Ohio but spent her early childhood in Sudan, Khartoum with her family. They moved back to Shaker Heights, Ohio, when she was a pre-teen. She always enjoyed performing and was involved in all her school plays in both high school and college. She said, “I loved to be in front of an audience or camera all the time. Shortly after college, I came to Los Angeles to pursue an acting career.”

Soon she was acting in TV shows like the UPN comedy Sparks, and doing guest spots on shows like Grey's Anatomy, Curb Your Enthusiasm, Missing, That's So Raven, The Cleveland Show and Animal Practice. Her career was on a role. She stated felt like she was “walking in my dream.” She told us, “A lot of people come out to L.A. with the dream of being a paid actor. The fact that I have been a paid actor for so very many years — that truly means that I am ‘walking in my dream.’ I get to do what I LOVE everyday and I get paid for it.”

Kym didn’t take her success for granted and began giving back. She said, “I have this uncanny knack for finding people who need mentoring. I knew the brother of Joshua’s biological mother.  She was headed down the wrong path — so I took it upon myself to help her take a better direction. Currently, I participate in organizations like Jenesse Center in Los Angeles.”

Here’s what happened next:


Passionistas: Tell us the story of how you got your baby.
Kym: It was during the Christmas/New Years holidays. My parents were visiting me in Los Angeles when I received a call from the hospital basically telling me that they had a baby for me. You can imagine my surprise.

The backstory is that I had been mentoring a troubled young girl and she got pregnant, so I knew she was going to have a baby, but I didn’t know that she intended to give the baby to me. After she had him, she left my information at the hospital as the person that she wanted to have Joshua. Because my parents were there, I was able to discuss it immediately with them and my mom reminded me that I had always wanted a child... and here he was... a gift to me.

Passionistas: Why were you the one chosen as Joshua's guardian?
Kym: I think it was ordained by God. I guess his biological mother knew I would take care of him the way I had taken care of her for so many years.

Passionistas: Did you really only have an hour to decide?
Kym: Absolutely — one hour because the hospital was discharging the baby and he needed to be placed. They couldn’t keep him any longer. At the time, I was told he was going to be placed in the system [if I didn’t take him].

Passionistas: Had you planned to become a mother?
Kym:: I’ve always dreamed of becoming a mother. I thought I would get married and do it all the traditional way, but life kept going on, my career kept me busy — and I had not stopped to become a mommy.

Passionistas: Tell us about the "village" of friends you have helping to raise Joshua.
Kym: The village is the other parents. There are seven villagers on the television show, but that’s not all of them. I have several close friends who are a major part of Joshua’s life: Rory, Cynthia, Amy, Mari, Torchy and Laura.

The seven Raising Whitley show villagers are Rodney, who has taken on the role of “Da-Da.” Val is my good friend and Auntie to Joshua. Wendell is my Hollywood husband and an uncle to Joshua. Harold is my longtime friend and assistant. Stacy, Sam and Demetrius are good friends and villagers.

I encourage people to get a village so that there will always be someone who’s like family looking out for your child.

Passionistas: How do you balance being a mom with your career?
Kym: As an actress, our hours can be grueling and like any mother that has a career or job, it is difficult. Balancing spending time with your child in the morning and after they come home from daycare/school before is the key. You have to seize every precious moment — even if it’s those couple of hours just before he goes to sleep or weekend time. Bottom line: he’s the priority!

Passionistas: How did the idea for the series come about?
Kym: Pretty much, once Joshua was with me, people would say, “Oh my God, I can’t believe you have a baby.” I didn’t know if I should be insulted or take another serious look at my life. I began to build my village and soon after, I realized the village could help other parents. Out of that, the series, Raising Whitley, was born.

Passionistas: Why do you think OWN is the right fit for the show?
Kym: OWN is the right fit for my show because of what it represents. I wanted my story to be told in truth and I knew matching up with a network that had a similar philosophy was key. Basically, I’m putting my life out there for everyone.... and the world will know Joshua’s story before he does. I had to make sure that the network I trusted with this awesome story was one that wanted to enlighten and inspire. OWN is all that.

I’m also very passionate about my new line of T-shirts. They’re called Don’t Feed Me T’s and they’re for children who can’t eat or be near certain things. I created these T-shirts because Joshua has a lot of food allergies.

Passionistas: If you could be one pop culture icon from all time and walk in their shoes for one day, who would you choose and why?
Kym: Harry Belafonte because I would love to have experienced the Civil Rights era from his vantage point, making a difference in the lives of African American people in such a huge way.   Also having his looks and his voice wouldn’t hurt either... I’ve always wanted to be a man for a day.