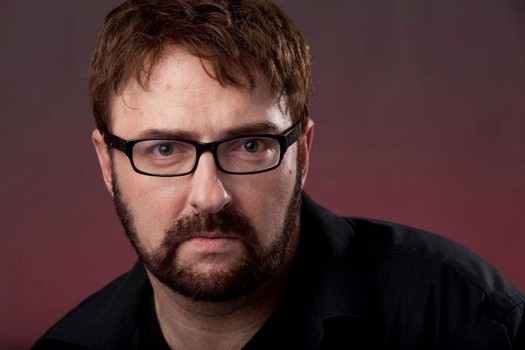 First time feature film director Robin Mountjoy got his start in entertainment playing blues music in bars in Kansas City. But after a move to New York, a friend suggested he try his hand at acting.

A love of filmmaking led him to study the work of the directors when he wasn’t on camera. He soon was taking acting classes and writing scripts. A grant from the LaGuardia Performing Arts Center in Queens, New York, has taken Robin all the way to Hollywood. And he’s on the verge of releasing his first full-length movie “Quick to Duck” in which he co-stars with Steve Guttenberg.

In a recent exclusive interview, Robin talked about casting the project. On the advice of a former co-worker, Mountjoy realized that he needed to have a big name in his film. Being new to the game, he turned to his distributor’s website for inspiration. There he saw the names of some recognizable actors.

So he called up the directors of those projects and got feedback on the talent. Since he wasn’t an industry insider, he pulled some managers’ contact info from IMDb and sent his script out for review. Guttenberg’s reps called back.

As for working with the star of “Three Men and a Baby,” Robin said, “He’s really talented and he’s really different than I expected. I expected the comedy. And when he walked on set, memories rushed back to my mind of movies I’d seen him in. But once we started working, and I’ve worked with a lot of actors over the years, he’s just a very good artist. He’s really collaborative and he’s really all about the process. And I really enjoyed working with him. I just treated him like any other actor but I respect him. I respected him for what he’d done in the past. But the more I worked with him that day, the more I respected him for what he was doing on set that day.”

In addition to writing, directing and acting in the film, Robin also brought his other talents to the soundtrack. He talked about the tunes that will support his project, “Music is all over this movie. I’ve been around music for years and years and years — since the ‘90s. I’m going to put together a soundtrack of original music from bands that have unique, cool sounds. It’s got a really rock, blues, alternative vibe to it. It’s really good stuff. My music’s in there, a couple other bands. It’s a really cool soundtrack. I think people will like it.”

And even though “Quick to Duck” doesn’t premiere until June 8, Robin is already focusing on his next film. As he explained, “Everybody was telling me out here to write a genre film. So I wrote a drama-action script.”

As he had done with “Quick to Duck,” Robin looked at people and stories from his own life to develop the script. As he recounted, “I was noticing a lot of soldiers going back and forth on multiple tours. I live down by Hollywood Boulevard and I'm constantly getting hit up by people, ‘Take a tour. Take a tour.’”

He continued, “So I said, ‘Let me get a soldier who comes back from the wars in Afghanistan and Iraq, who suffers from Post Traumatic Stress Disorder. And he loses his wife, loses his house, loses his job. He’s just totally losing everything and he ends up on the streets for a short time.”

After getting in trouble with the law, the lead character has to take a job at a Hollywood tour company. But the former war hero has to kick into combat mode when he discovers that Al Queda has infiltrated the business and has a terrorist plot in the works.

But Robin isn’t the kind to let action overpower the heart of his films. As he conceded, “I found that writing an action script, I could still have my type of character in it which I love. I like working characters, different types of characters… but I put them in a genre that Hollywood seems to like to finance.”

To learn more about “Quick to Duck” and Robin Mountjoy’s other projects visit his official website.