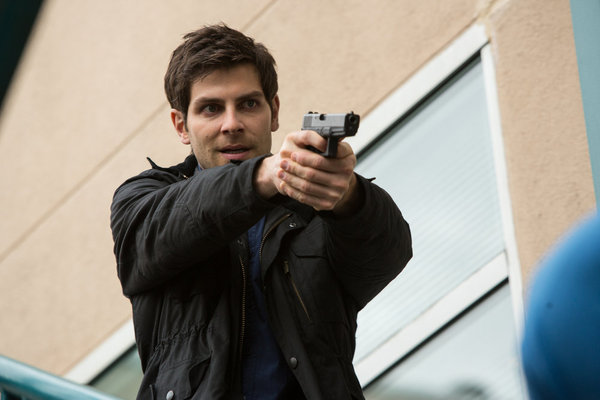 Grimm is just a few episodes away from wrapping up Season 2 and what an intense season it has been. It’s been chock full of twists and turns. Nick found out his mother has been alive all these years. Juliette woke up from her coma and didn’t remember Nick but was crushing hard on Renard. Monroe and Rosalee’s relationship grew stronger. Hank discovered Nick’s secret. They both discovered Renard is a Royal and Adalind is pregnant with what might be Renard’s baby. Who knows where this will all go when the show returns next fall for Season 3. In a recent conference call, series star David Giuntoli, who plays Nick Burkhardt, gave a few hints for the rest of the season.

For starters, Nick’s love life is about to heat up again. He said, “You could definitely see a Nick and Juliette reunion. And again, in Grimm fashion they love tearing people apart and bringing them back together and who knows how hard they're going to make that for Nick and Juliette.”

He said that Nick was patiently waiting for Juliette to come around but stated, “I certainly hope he wouldn't wait forever. I am personally more shocked at the point that she would be interested in me after all I have done — truly cowardly moves on my part as far as Juliette's relationship is concerned. I wouldn't tell her about any of this after she'd lost her mind, went into a coma, just really struggling with memory loss and going crazy. And I'm still sitting back like, ‘I don't want to tell her. What if she leaves me?’ So I hope we have to talk about things in a real way before we get back together. I think Nick's a guy who knows what he's done to her and would probably do anything to get her back. So I think he'd wait for a long time.”

And while Captain Renard came between Nick and Juliette for a bit of this season David wanted to set the record straight on his relationship with his boss. “Even though we are working together I'm not too easy with him. I wouldn't call it a friendship. I wouldn't call us pals. We wouldn't go out and eat together. I think we more or less have a common enemy. I always like to think, when I'm working with the captain, about that picture from World War II where Stalin and FDR were sitting next to each other with Churchill. How did Stalin get there? But they just had a common enemy. And so we're working tentatively together. He did, after all, try to kill my aunt.”


David also talked about the introduction of some characters from outside the realm of the Grimm fairytales. He revealed, “We deal with the undead in a way that's never been approached before — in very typical Grimm fashion. So ‘zombies’ will be coming to Portland.” He continued, “We're going to be seeing something very paranormal — almost X-Files-y that is not a standard Grimms fairytale and almost like we're dealing what people on the Earth think are aliens. But we tell you what they really are — the real explanation for them.”

He also said some of the viewers questions will be answered stating, “The Royals get closer and closer to me. They come to Portland and they want the key. And I learn much more about why it is they want the key.”

And in the biggest hint of yet to come, he admitted, “The cliff hanger of this season is — I don't know how the writers are going to get themselves out of this corner that they've painted themselves into — one of the cast may not live through the finale.”

Tune in to the last few episodes to see who survives Season 2. Watch Grimm on Tuesday nights at 10 p.m. EST/9 p.m. Central on NBC.