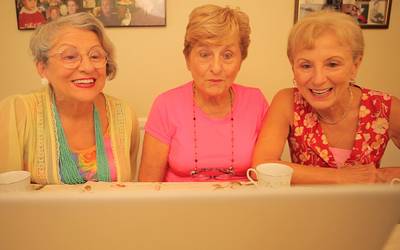 You know we always jump at the chance to interview celebrity siblings. But this particular interview was very near and dear to us. OWN is premiering a new show this Saturday, June 1, Golden Sisters. It stars three sisters Mary Bartniki, 82, and the twins Jose and Terry, 74. The three offer their opinions and insight on pop culture, celebrities, sex and even the apocalypse. Something tells us this is going to be us in a few decades.

NOTE: We did our best to keep them straight over the phone, but they sound identical and overlap answers a bit, so at times it was hard to identify the speaker. So we hope you, and they, can bare with us and forgive the instances when we could not determine who was talking. We know it's worth reading even under those circumstances. Enjoy!

The sisters grew up with two other siblings in the Bronx, New York. Mary told the story of the day her sisters were born. "I was eight years old when they were born… My grandmother came and said, 'We have one girl.' And we were so excited — me, my sister and my brother. And then about a half hour later grandma came out and said, 'We got another one!' In those days twins were rare. We were so excited we went downstairs after she was born. Mama was in the bed and we saw these two beautiful, beautiful little girls. And they have been a joy to me from the day they were born to today. Would you believe it? 'Til today! And they are the loves of my life. I love them. I can't help it."

The sisters all migrated to California. Mary sated, "We all moved out because Angelo, my older brother, was my mother's favorite." When their mom wanted to come out to be with Angelo, all the others followed. They lived just a few blocks from each other.

These days all three sisters work in Josie's hair salon, but they had a hankering to do a reality series. Terry explained, "I pitched a show to a production company and they liked it but they didn't do too much about it. We thought, "Well let's do a video." So we thought we have lunch every Wednesday together, so let's get someone to film us. Well we happened to look at the Kim Kardashian tape accidentally and "Oh my God!' They got us on film and that's what went viral. Josie got us to watch the Kim Kardashian tape. Josie tell them why, tell them how. Because we're not porno lookers."

Josie continued, "I own a salon, Michelangelo's, in Woodland Hills, and I was reading a magazine and I commented to one of the girls, 'Gee that Kim Kardashian is beautiful.' And she commented, 'She's a slut. Did you see her video?' And I said, 'No.' She said, "Come to the front desk. I have a computer at the front desk." And I watched it for two minutes and I thought this was horrible. And I never mentioned it until we were at lunch and they said, 'What do you think of Kim Kardashian?' And that's when I said, 'Do you want to look at it?'"

Mary interjected, "What a shock. Let me tell ya."

But Terry chimed in, "We're very excited because it made us famous."

Before the Kardashian tape hit, the sisters took to the Internet and began giving advice to their followers.

The video went viral, with a whopping 3 million views. That certainly caught the attention of the production company LMNO and OWN.

The series follows the sisters on their escapades from discussing the zombie apocalypse and being prepared for disasters to Mary's dating life. She explained, "My husband passed away last year. I was married 62 years. And my sister Terry wanted me to go on a date. And they tried to date me… oh my God!

She continued, "We want to show that we have energy at 73 and at 80. Life doesn't end at 80. Right now life is beginning for me. I can't believe it… People think at 80, that's the end and we've got one foot in the grave, which I do. But I'm still alive and happy and everything's wonderful."

Josie added, "I think that laughter is the best medicine and I think that's what keeps us really healthy because we belly laugh a lot. And that's what people don't do. They should buy funny movies and laugh as much as you can."

We asked the sisters our two favorite Pop Culture Passionistas questions and the exchange that followed summed up the rapport between them that makes their show so special. We included the conversations verbatim below.

PCP: What are you most passionate about?
Terry: I was very passionate about getting this on TV.
Mary: I like eating. That's my passion. What am I going to eat the next day?
Josie: My passion is exercising. I love to hike.
Mary: I like eating.
Josie: Well you can't hike on a full stomach.
Mary: Eating and being with my family.
Josie: You eat after you hike not before.

PCP: If you could chose one pop culture icon from all time and walk in their shoes for one day, who would you choose and why?
Terry: I would say Elizabeth Taylor.
Mary: Not me. I said something bad about Madonna, but I wish I was Madonna. Years ago we went to her concert and it was all about zombies, but that was not Madonna. I like Madonna when she sang, "Like a vir-ir-ir-gin." I enjoyed those songs.
Josie: So you would like to walk in her shoes?
Terry: No I like Lady Gaga.
Josie: No I like Lucy.
Terry: But she's not pop. I said Elizabeth Taylor but she's not pop. Who do you like that's pop? Michael Jackson?
Josie: I do because of my grandson
Mary: But would you like to walk in his shoes?
Josie: No
Terry: I like Lady Gaga because she's really talented.
Josie: Barbara Streisand. Is she a pop star? I don't know. I adore Barbara. She's my favorite. We went to see her in person. She's phenomenal.
Terry: So Mary likes Madonna, I like Lady Gaga and Josie likes Barbara Streisand.
Josie: Barbara Streisand but I also like Lucille Ball. I think an icon is an icon.

The sisters' conversation grew to a frenzy and it was impossible to tell who said the following, but we had to include it anyway:
Sister #1: What about Snookie?
Sister #2: Oh Snookie, no I don't wish I was her.
Sister #3: Who wants to look like her or be like her?
Sister #1: See the people we mentioned have real talent and class.