Paul Fisher Is Trying to Revolutionize the Fashion Industry 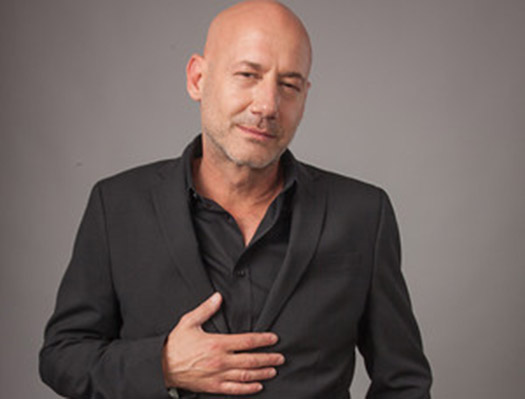 We're big fans of model agent extraordinaire Paul Fisher. Sadly his old show Remodeled is no longer on the air. But he is currently in negotiations to bring his new show I Can Make You a Supermodel to the U.S. next spring. In the meantime Paul is still battling a seemingly impossible task of revolutionizing the fashion industry one role model at a time. In a recent exclusive interview, he talked to us about his mission to have models represent real women, his plans for Social Media domination and his latest campaign with Romeo & Juliet Couture to find the next R&J model.

Paul is currently shooting a TV series in the Netherlands that takes the concept of Remodeled one step further. The European production company wanted Paul to create a version of his old CW show in the Netherlands, but he told them, "I've been to Holland and they're the nicest people on the planet. If you think I'm going to yell and scream at a bunch of people from Holland, you're crazy. It's not going to happen."

Instead in I Can Make you a Supermodel he sets off in "a James Bond bitchin' motorhome" looking for undiscovered to talent to represent some of the biggest brands in the world. Each episode finds Paul and his team seeking out a specific girl or boy for a specific brand that might include the likes of Tommy Hilfiger, Guess, Massimo or Louis Vuitton. Paul stated, "Me and my team are scouring the streets of Holland to find this one kid, this one special face for a very, very special designer…. In the season premiere, I take a pig farmer, a 17-year-old pig farmer, and watch what I do with her. I put her on the f'ing map."

He continued, "The kids that I found in the first episode, I sign them to worldwide contracts… You literally see these little 15-, 16-year-old kids right on the streets. And they walk up to me nervous and then you see them walking down the runway for the biggest, most famous designers in the world."


While he waits to hammer out the details of bringing the show to the U.S., Paul and his global collection of agencies The Network is working with Romeo & Juliet Couture to find the fashion house's next model. Paul explained, "We're getting our million followers around the world to turn in a video of their most romantic Romeo and Juliet love story. We've had straight videos and gay videos and cross-gender videos. Some of the most beautiful love stories that you can ever possibly imagine."

The models are encouraged to share their videos on Social Media. Within the first six days of the campaign, the videos had over 163,000 hits. The winner of the contest will get a trip to Los Angeles to do a photo shoot for Romeo & Juliet.

But Paul hopes to get a lot more out of this campaign. He said, "I'm trying to get the kids to understand that they can take their careers into their own hands with social media… They now can promote themselves and create a humongous fan base and they can become a supermodel. What social media has done is level the playing field for kids all over the world… Now your fan base is as important as you being in American Vogue magazine and that's what I'm teaching these kids around the world."

It is all part of Paul's grand scheme to build up 100 million followers via Social Media and revolutionize the fashion industry. He's trying to prove to young people that, "You don't have to move to New York. You don't have to lose 75 lbs. You don't have to do all these crazy things that our industry is asking of you. You can just be very focused and create a lot of effort online and build a huge fan base. Clients like Maybelline and Revlon get very, very excited about kids who have a huge fan base. And that's why the Romeo & Juliet thing is so important to me because I've got to get to 100 million followers… so we can stop the f'ing madness."

The "madness" he refers to is the unrealistic goals set for young models today. He described the pressure being put on models to be unrealistically thin. "In the '90s, the correct weight [for a model] was 132 [lbs.]. It's down to 116 now. They call these kids 'hangers.' The problem is that these magazines and the advertisers around the world are not taking social responsibility for the images they're putting out their into the world. They don't give a s#*t if these young, beautiful women are sticking their fingers down their throats as long as they're selling clothes. I just believe that when anybody does something and they don't think about others, sooner or later that is going to catch up."

And so Paul is taking on the big boys, trying to change the expectations put on models. His goal is to reach over 100 million Social Media followers in the next two years. "Then if all these big designers continue to use women that are too skinny, people that are not representative of our communities around the country, I'm going to close them down. I'm going to tell my 100 million people to stop buying their clothes. So my whole Social Media program right now is the most important thing in my life right now because it gives me the power and the influence and the leverage to turn a bunch of whispers… into one very, very, very loud voice."

For more information on Paul and The Network visit their website. You can also find out more about the Romeo & Juliet Campaign. And if you believe in what Paul is trying to do, become one of the 100 million and follow him on Twitter.