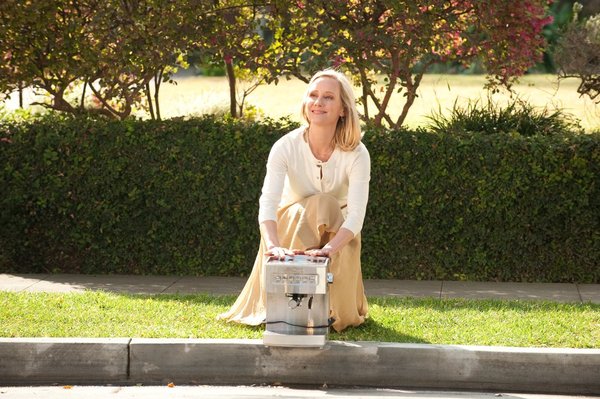 Over the years Anne Heche has come to be known for her small screen successes like Men in Trees and Hung. And she’s also had her share of high profile missteps in the press. But she’s back in primetime with a brand new series about a mid-Western woman who can talk to God.

Anne’s professional journey started when she was just 17 years old and was cast as Vicky Hudson on Another World. In a recent conference call interview she admitted that her career in television almost had an abrupt ending. “I tried to quit acting after I stopped that job. I wanted to go to Parsons School of Design. I never thought in a million years that anybody would continue to hire me as an actress.”


But fate intervened. As Anne recounted, “When I was getting ready to go I paid my, first tuition and everything and then I got a call asking if I wanted to go and audition for O Pioneers!, a Hallmark Hall of Fame movie. And I got it and then was like, ‘Well.’”

The 43-year-old star continued, “It is so funny because it does dovetail perfectly into ‘Save Me,’ because I thought, ‘I must be getting a message from God. I must be. I mean come on. Somebody's hiring me to go work with Jessica Lange? I better do this.’ And so I didn't go to Parsons School of Design and I haven't stopped working since. So God does dictate some things in our life I guess.”

But Anne admitted her relationship with a higher power has not always been simple. “God is something that I have confronted, questioned, dealt with, looked at, experienced, rejected, embraced my whole life. I've had a give and take with this God identity. And I think everybody has. I think everybody talks to God sometimes. I think everybody tries to figure God out. I think we all would love to have a helping hand. I think we would all like to trust that we're being taken care of, that life means something.”

Now she hopes that her small screen persona, Beth, will help other people get in touch with their own thoughts on the matter. As she noted, “This is a story about a woman who's dealing with that every single moment of her life, and wanting the best for everybody and wanting to use that experience of God to help people. So I hope that people feel like God's out there helping them out — that we're here for each other, because that's all we've got.”

And she wants them to look around them to find that inspiration. “If you can find God in a friend, if you can find God in a smile of a stranger, it's here, you know? It's here,” Ann added, “We're here to help each other out. And I hope people feel that from the show, even if it's to make people laugh. Who's to say that laughter isn't God?”

Posted by Pop Culture Passionistas at 8:57 AM