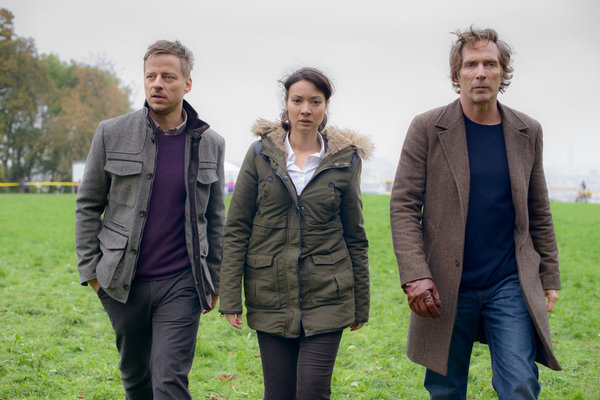 NBC’s new global crime drama Crossing Lines premieres on Sunday, May 23. It stars one of our favorite Prison Break alums, William Fichtner. On that show he played the FBI Agent Alexander Mahone, who was searching for the escaped prisoners. This time around William plays Carl Hickman, a wounded ex-U.S. cop who moves to Europe to help solve cross-border crimes and bring these global criminals to justice.

He is part of an elite team of international cops played by Donald Sutherland (The Hunger Games), Marc Lavoine (The Good Thief), Gabriella Pession (Wilfred), Moon Dailly (Black Heaven), Richard Flood (Titanic-Blood and Steel) and Tom Wlaschiha (Game of Thrones). It was created by Edward Allen Bernero (Criminal Minds) and Rola Bauer (The Pillars of the Earth).

Production is set in Prague and filming took place all over Europe from Ireland to Paris. In a recent conference call interview William talked about filming in Prague, getting involved with the show and playing Carl Hickman.

On Deciding to Take the Part
“I read it and I liked it but it's a challenge. It was big thing. This is not like, ‘I'm going to commute to California and see the family.’ This was a big commitment to go because I wasn't going to do this without traveling with my wife and my entire family, which I did. But I did speak to Ed and you can talk about anything and imagine anything but if it's not on the page, it's not on the stage. The first two episodes were exceptionally well written. And if I didn't have that right off the bat, I don't think I would have entertained it any further. And then I spoke to Ed, had a few questions and I wondered about characters and where it was going. And every time I had a conversation with him, it was better than the one before. So it didn't take long. Just a mater of a couple few shorts weeks and a lot of deep conversations with my wife and onboard we were and away we went. Glad it all went that way.”


On Shooting in Prague
“It surely was an adventure, different than anything I've ever worked on before... From the perspective of the character of Carl Hickman, an ex-New York City cop living in Europe, living in Amsterdam, it was great for an actor being a little bit of a fish out of water because it's exactly what it was. Not that I felt that way, certainly not in the beautiful country of the Czech Republic and the wonderful City of Prague. But that's where we began. The opening episodes took us into a park in Paris and different places in Paris, France. So we shot there for a couple of weeks. Some of the episodes took us into the South of France and we shot there. So you can get the idea that as we went on this tour it was remarkable because the places changed and the people changed and the locations changed. And it was fascinating and unlike anything that I've ever experienced. Sure I've shot films where we've gone on location but nothing quite like this… It was a fantastic time.”

On the Look of Prague
“Prague just has everything. Sure, you can find the sleek office building but you can find anything in Prague. And I really mean that. Amazing places. I lived in old town Prague with my family when I was there. There were days where we were shooting at locations that were literally a half a block away that I could walk to work. And other times we were at our home base at the sound stages. But it's a beautiful city, very modern and at the same time very old. So much was available not only visually but for the experience. Not only as actors but as people because this was our home. This is where we're together. Many of the actors and the producers had our favorite Irish pub in old town and on Fridays and Saturday nights and it was a beautiful thing to be there and experience it… I'll never forget [it]. It was really truly that remarkable. There was nothing about it that felt like. ‘Oh boy, I can't believe it. Man, I got to get out of here.’ No. Quite the opposite.”

On Exploring His Character and Working with Ed Bernaro
“It's all part of what I love to explore and to try to find who is this guy. What makes him tick? What does he care about? What's his world about? What does he want and what does he dream about? And all that stuff, all the actor speak that I have the most fun thinking about. And hopefully at the end of the day fully realizing somebody that you made to be a real person. I have to tell you this that I had a tremendous amount of support and help from the material because I guess I'm a little old school but if it is not on the page, it is not on the stage. And Ed Bernaro knows how to put it on the page. It's true. The first two episodes alone, I as an actor, I'd love to keep reading it and reading them over and over and over because I think good scripts gives you more and more details and you get more and more layers as you work on them. And I was not disappointed working on this material ever.”

Developing the Character of Carl Hickman
“Every character with every show this is like everything. You take a first step and by the time you take ten steps you're better on your feet on the tenth step than the first step. So we started from the beginning. We had a super strong base right off the bat. It's so clear in the first two episodes who the character is. It's the back story that for me as an actor that I like to fill in because even though that's not something that may be said in the production but it's the understanding of the base of where somebody comes from and who someone is that really, really feeds who they are today. Those are the conversations over the phone and in Prague over many a pilsner with Ed Bernero that I just loved talking to him about and sharing my ideas of who I think the guy is. And so yes, the back story elements get deeper and deeper. But so much of what was there from the beginning, who he was and what his difficulties were and some of the crutches that he was leaning on in his life, Ed Bernero put that in the story I'm happy to say. So it was just a matter of just to go deeper with all of the thoughts that he'd already put out there for me.”

On What About the Show Will Speak to Fans
“What is going to be appealing is, living in the states occasionally we get incredible actors from around the world being on series and I love the aspect. The first time that I read the first couple of episodes of the show and I loved the fact of having the American guy be the fish out of water. Have the American guy join in with his sensibilities. And because we have a multinational cast, it's not just a gimmick or something that's, ‘We're the A team.’ It's not that at all. It's just that our experts come from different places. You get the Italian girl with the Italian culture behind her. And Marc Lavoine, the leader of the team, the French singer and actor, and his French sensibilities. And all of this plays in and all of it comes through. And I found that that was not just something that was a nifty thing about the show but part of the heartbeat of the show.”