Matthew Rhys Dons Many Disguises on The Americans 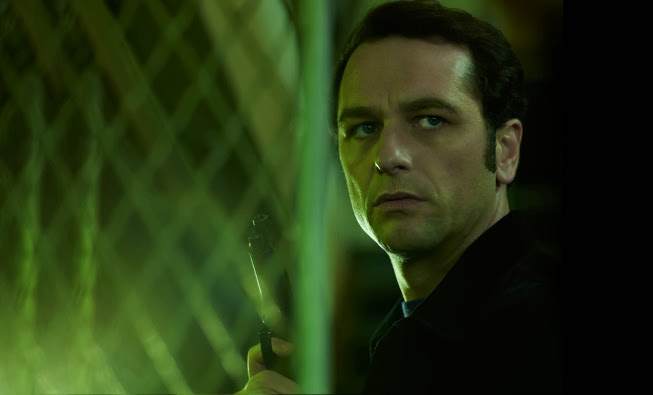 Don’t get us wrong, we’re happy that Matthew Rhys took one of the starring roles in the FX series The Americans last year. We loved him so much as Kevin Walker on the tear-jerking drama Brothers and Sisters, that we were happy to see him again. But we wondered before the show aired, if we’d believe the lovable lawyer as a KGB sleeper agent. Needless to say, Rhys did not disappoint as Philip Jennings.

But in a recent conference call interview the Welsh actor discussed his own initial trepidations about signing on to the show. While he acknowledged that he appreciated what he called FX being “bold in their casting” of both himself and co-star Keri Russell who plays his wife Elizabeth, the 39-year-old conceded, “I’m not the big, macho, butt kicking person. But I think as a cover we work well in that we blend into Americana suburbia, and therefore there’s a sort of twist to it. So that element I was nervous about as to sort of being credible in that role with someone who does all those things.”

He also was concerned that the concept of a suburban couple in the ‘80s who happen to be Soviet spies might be a bit too much for viewers to buy into. “The other thing that I continue to find difficult, it’s a very strange series in that an incredible amount of it is based on absolute truth; not just the storylines, the setting, what these people did, etc., “ noted Rhys. “So, that being said, you tell the audience this is all true, you can say that until you’re blue in the face, but to a degree you’re still asking the audience to go on a fantastical journey. It’s an ask of the audience to go with you, to believe this scenario. It’s incredibly heightened reality. And it’s not just a straight spy thriller or a straight domestic drama; it’s a combination of the two.”

Rhys continued, “What I find difficult, and still do and was nervous about, is the balance of the two and making the leaps credible — that in one second you can be assassinating or honey trapping or whatever and the next you’re making PB&Js for the kids. Both lives have to be credible and there has to be a credible link between the two that affects the two and it’s that fine balance that made me nervous, and still does.”

So in order to pull all of this off, Rhys did a great deal of preparation for the role. As he explained, “Research to me now as an actor is always slightly amazing. When I first left drama college many moons ago I remember research as going to a library and taking out books, or if you had to have an accent you’d, if you were someone in the British Isles, like it was for me, you’d get on a train with a tape recorder and tape those people. And now you type in YouTube on your browser and off you go, and the amount of information I found, not just on the Internet, but on YouTube was staggering really. And it was all done on the sofa with a laptop. But it is sort of amazing.”

The former student at the Royal Academy of Dramatic Art also did a lot of reading. “There’s an incredible book about the KGB archivist who was archiving everything for the KGB. He was sort of charged with this job of documenting everything for the KGB, and he did two copies; he did one for the KGB and one for himself, this over decades. And then eventually walked into the U.S. Embassy and said, ‘I am the official KGB archivist and I have all this stuff.’ The U.S. thought it was a sting and said, ‘Get out.’ He went to the Swiss Embassy, and so everything he documented is available, which is amazing really.”

And some of what Rhys uncovered was not pleasant. As he recounted, “The more disturbing stuff I found was like when the wall fell and… in East Germany all their files became public knowledge, and all these sort of people found out who had been informing on them all their lives. So husbands found out their wives had, and wives found out that husbands had, and it’s sort of incredibly disturbing, I thought, what that knowledge becomes once it’s available.”

Not all of Rhys’ prep is done in advance. His character is prone to donning disguises to help him — even more so in the coming season it seems. An element of the show that’s amped up a bit more so than in real life, according to Rhys, “I don’t envy the unenviable task of the hair and make-up department that sort of feel that with each new disguise they have to be different or bigger or better, because the reality is with the CIA they tended to use two or three sort of disguises and round robin them. But you know its television and we’re a little more heightened and dramatic, so therefore they do need to kind of have a little bit possibly more dramatic impact.

“But that feeds into what the more general storyline for the Jennings is that there is this greater feeling of the danger of is a lot more palatable and a lot more present,” added Rhys. “And I think they take their role of not being recognized and not being caught that much greater now, because the intensity is sort of closer on their doorstep.”

Still, there’s a lighter side to his alter egos. Rhys admitted that he does have a favorite disguise, “I’ve named him. He’s called Fernando. He has longish hair. We actually saw him in the first episode of the first season when he beat up someone who was being rather lascivious with his daughter at a department store. He has like a mustache and long hair and a little goatee, and he feels very Latin to me.”

See Matthew Rhys in all of his various personas when Season 2 of The Americans premieres on Wednesday, February 26th at 10:00 p.m. EST/9:00 p.m. Central on FX.
Posted by Pop Culture Passionistas at 3:14 PM