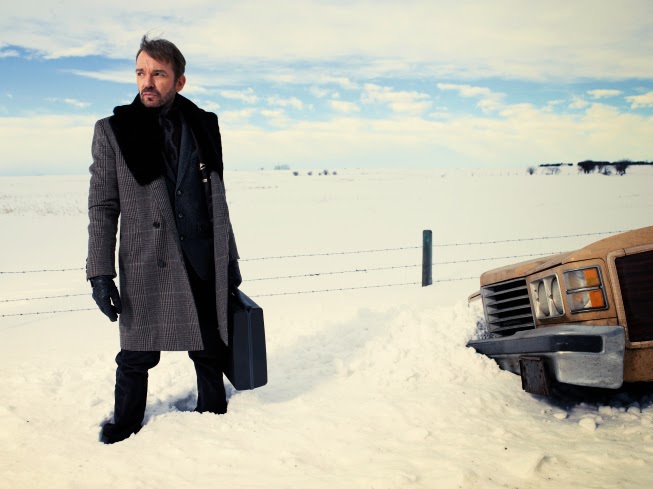 The list of actors moving from the big screen to small never ceases to impress these days. So it was really just a matter of time before iconic film star Billy Bob Thornton would join other A-listers in turning to TV. But Thornton didn’t pick just any series for his boob tube debut. He signed on to a reimagining of none other than the Coen Brother’s cult classic Fargo.

After all, even Thornton conceded that getting into TV has become an inevitability, “The fact of the matter is we have to face this, that Baby Boomers, in particular, really have to look to television now, not only the performers and the writers and everything, but the audience.”

Following what he calls a “drought” of good movies in the ‘80s and a short Renaissance for films in the ‘90s, Thornton acknowledged that the features aren’t what it used to be. As a result, the attitudes about working in TV have changed. “When I was coming up it was a bad word.  And now, it has a cache and actors are clamoring to go on television because it’s a place that we can do the things we were doing in movies. There’s a spot that television is filling that the movie business is not.”

Another draw for big movie stars is the surge of “limited series” like Fargo, which allow actors to commit to a finite season of a show rather than a five-year run. These revolving story lines are what has attracted talent like now Oscar-winning actor Matthew McConaughey to HBO’s True Detective and helped bring Jessica Lange to FX’s anthology series American Horror Story.

Thornton, too, found the concept to be a draw. “It felt like doing a 10-hour independent film.
That’s very appealing,” explained Thornton. “I’ve been accused many times as a writer/director of my pace is too leisurely and it’s too long and stuff like that. Well, here’s a chance to do that kind of thing and you’ve got 10 hours to do it in.”

Plus it affords Thornton the opportunity to continue to do movie work as well. “It’s a way to do both,” he noted. “If you came up as a film actor you don’t have to give it up.  You can do great work in television and then on the occasion that you get a movie that you really love you can still do it.”

And Fargo ives Thornton the chance to take on yet another rich but twisted character. He talked about playing the show’s manipulative drifter, “I looked at Malvo as a guy who is a member of the animal kingdom.  We don’t get mad at polar bears, they’re all white and fluffy and they do Coke commercials with them at Christmastime and stuff like that, and yet they’re one of the meanest, most ruthless predators on earth. And so, Malvo probably doesn’t think of himself that way.  He just thinks of the moment and how do I get the job done?”

Contrary to what fans may expect, being menacing isn’t necessarily easy for Thornton. As he explained, “It is a tough one.  When you weigh 135 pounds and you’re telling people who are six-four, 250 to get out of your way, how do you do that?  Well, a lot of that… is in the eyes.  If someone is talking to you and tells you that you ought to do something and you can tell they mean it, those are the scary people.”

It’s a character trait that the Sling Blade star has spent a lot of time researching for roles throughout his career. Thornton recounted, “I worked in a prison years and years ago on a movie and I was told by these guys, there were all these guys with the Aryan Brotherhood and some of them had tattoos and they’re big, muscled guys and everything and this one guy told me, he said, ‘Do you see that little skinny guy over there in the corner, the one that’s not talking, just kind of sits by himself?  That’s the big guy right there.’  He said, ‘That’s the guy you don’t want to mess with.’”

Truly committed to his craft, Thornton dove deeper into his research. As he recalled, “I talked to  the guy ultimately and I could tell that he meant what he said.  So, those are the people you want  to watch out for.  And it’s like maybe I can break this guy in half, but he would hunt me down,  he would crawl until his fingers were bloody on the asphalt to get me.  So, those are the ones.”

Yes, Malvo is sinister but in true Coen Brothers fashion there’s an underlying wit to the character  — a balance that Thornton has honed by playing multi-dimensional roles like Willie in Bad Santa. It’s not an easy task, Thornton admitted, “One way or the other, yeah, it is a fine balance.  You’ve got to be menacing, but I look at Malvo’s sense of humor as his only recreation.  I mean, it’s like for Malvo to mess with people the way he does, which he doesn’t have to, he could just leave or just use them for whatever he’s using them for, but he still has to mess with them some.  And I think for him, that’s his recreation.  It’s his only social contact and so, screwing with people for Malvo is kind of like jet skiing for most people.”

That dichotomy is sure to make Thornton’s new character one of the standouts of the TV season. He remarked, “I look at Malvo as a type of sort of snake charmer.  Once he looks at you you’re under some sort of spell.”

Fall under Billy Bob Thornton’s spell when Fargo premieres on Tuesday, April 15 at 10:00