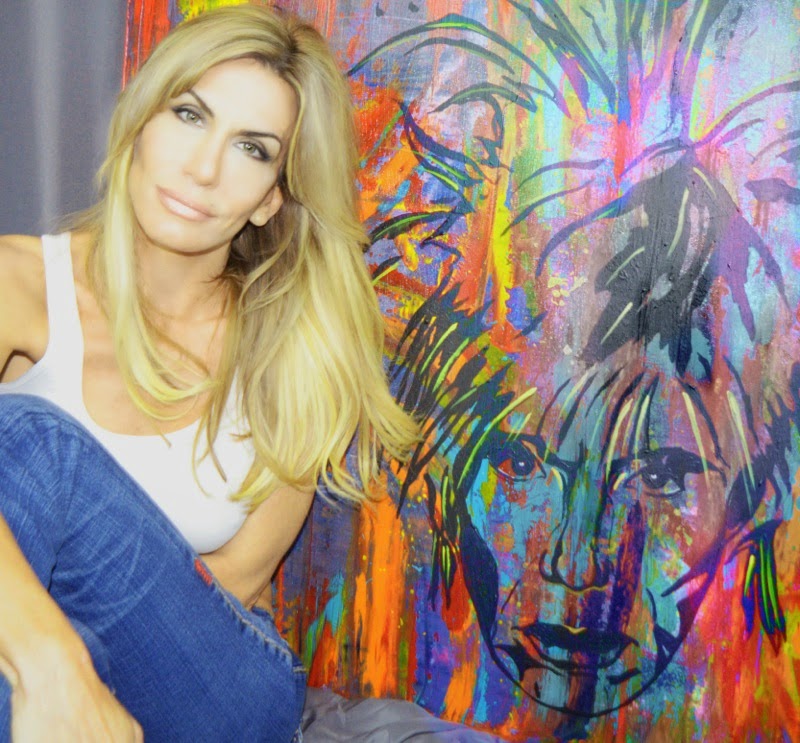 While we are fans of a great variety of artistic styles, it should come as no surprise that we are especially drawn to pop art (our name might give that away). So when we saw the art of Elissa Tracy we were more than intrigued.

Elissa, originally a photographer and designer, paints in several styles but is moving more towards her Andy Warhol-esque pieces. Yet whether she is bringing a pop icon like Elizabeth Taylor or Jimi Hendrix to life or creating a stunning abstract work, her highly stylized pieces evoke an emotional reaction. The viewer can sense Elissa’s fearlessness and rebellion in each brush stroke.

In a recent interview she told us, “I call it industrial pop art because I mix the pop art and the narrative and the abstract all together as one. I do some abstracts that are by themselves but the path I’ve been going down lately is mixing all three — graffiti, abstract and pop art.”

Her subjects have ranged from Marilyn Monroe to Frank Sinatra to Jimi Hendrix. She told us, “I’m really drawn toward old Hollywood. I read a lot about, do a lot of research on, whoever I’m going to paint. I don’t really have a rhyme or reason to [how I pick a subject]. I tend to be drawn to the old Hollywood glamour. There isn’t a lot of people now, to me, that I find that interesting. I find the older icons way more dynamic and interesting than who our icons are now.”

While she enjoys doing a straight abstract piece, she leans more towards creating this iconic imagery. She stated, “I love the abstract because it’s more of an emotional outlet for me. The pop art is very detailed and I’m structured with it. And I’m trying to grasp something from that person.”

She continued, “As a photographer, I mostly photographed models, actors and musicians. So it’s always trying to capture the essence of that person. You’re capturing it in one still life photo… and for me it’s the same way with painting.”

When she created her portrait of Elizabeth Taylor she said it was about her eyes and the expression that we have all seen so many times in Dame Elizabeth’s photos.

Elissa noted that she gets a great deal of feedback on her Marilyn Monroe painting and discovered people were reacting to the addition of the narrative — the date of her death, her age, the $.19 cost of the Life magazine cover. This collage-like feel to her paintings sets her apart from other pop artists.

The artist sites some of the greats as her influences including Georgia O’Keefe, Van Gogh
Tamara de Lempicka and, of course, Andy Warhol. So it was no surprise to us when she said he is the pop culture icon she would choose to be for one day. “I read his diary several times and I’m really intrigued by his personality. His marketing was incredible. He had definitely something to say. He liked being around people as an observer and then would take from that. And I relate to that. I liked that he would be in the limelight but when he was in interviews he said very little but what he said was profound. I would like to be in his head and see what he was actually thinking.”

Elissa also has another pop culture influence, but this one is fictional — GI Joe. In fact she has created an entire series devoted to the plastic doll. She was inspired by the art cards that came with each action figure in the 1980s. She said, “They’re really comical and interesting and I got intrigued by that. There are so many characters to choose from.”

As an avid collectibles fan and seller, she found that there was a lack of GI Joe art and so she decided to fill that void. She also began to cosplay as a GI Joe character — The Baroness.

She began dressing as leather-clad femme fatale, and despite her blonde tresses, bore a great resemblance. While some die-hard fans could not get past the hair color, she adopted the persona of the Blonde Baroness and began painting self-portraits in character.

She recalled, “I painted the self-portrait and I started doing a twist on things. And I did it with the narrative with one of the other GI Joe characters, Cobra Commander. I put a sign with him and I started playing around with that as well. I’m going down that road with my new series. I’m not just painting the action figure, I’m trying to put a narrative with it that’s a twist or comical off the art cards from the ‘80s… It’s another dimension of performance art, another outlet really.”

Elissa would like one thing when people view her art, “I hope that they’re inspired. The feedback that I’m getting is that they find the narrative part integrated with the pop art and the abstract interesting and it makes it more personalized for them. I hope people are inspired. I hope that my painting evokes some sort of emotion. That’s all I can ask for.”

She also has one other goal with her art. “I am hoping to pave the way of artists being more understood. We’re individuals but we still have something to say and maybe it’s not out loud, maybe its through our paintings, or through our expressions of something… A lot of people misinterpret artists either as being shy and unapproachable, but we have a lot to say but it may just be in a different way.”