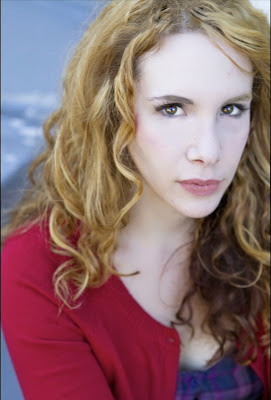 If you think you’re busy, you should meet Hallie Jordan. The young actress and producer has a lot on her plate, but that’s been her goal from a very early age when she was inspired to follow her father and grandfather into show business.

As she explained during a recent one-on-one interview, “My family has always been in entertainment. My grandfather was a publicist for RKO. My father was an inventor and a pioneer in cable television in the ‘80s. So it’s always been encouraged.”

Although she was born in New York City, Jordan moved around a lot growing up. She recounted, “I went to a new school every year between fifth grade and college. I lived in Orange County, in Florida. I did Second City Chicago for a little while. And then I graduated from the University of Redlands out here in California.”

She also spent summers at the French Woods art camp in upstate New York during high school and immersed herself in community theater, show choir and as she put it, “every arts, drama, thespian club I could be a part of, I was a part of.”

Jordan even had the guts to strike out on her own at an early age to hone her craft. “I went to a performing arts high school. I actually moved out when I was 16 to go to Huntington Beach High School for their Academy for the Performing Arts Magnet. At the time my mother was living in Florida and I wasn’t a big fan of the education system there,” she conceded.

Not content just to be a good actress, Jordan created a personalized degree while at the Johnson Center for Integrated Studies at the University of Redlands in “The Ontology of a Performer.” As she remarked, “I noticed that a lot of my friends who were graduating out of these major conservatory programs were not getting work. Even people who were more talented than me, people who were at one high school their entire career. So I decided that the best idea for me was to go to the University of Redlands where they offered this program and see why different people make it in the entertainment industry while creating my own basis in L.A.”

Jordan added, “The Ontology of a Performer was a mix of psychology and sociology. And I took the syllabi that the teachers gave us and I incorporated preforming arts into it. So instead of a final exam, I would write and produce a mockumentary or instead of a report, I would interview somebody about their career and their process.”

Besides giving her a unique perspective on acting, it also helped her navigate the often choppy waters in Hollywood. “When it came time for me to move to L.A. after graduation I had more of a sense of what was going to be expected of me, what I was going to need to succeed and how people who were successful were doing it,” Jordan acknowledged.

The legwork has seemed to pay off. Last summer, Jordan created a pilot called To the Bridge. And, while working on sketches for Funny or Die, she met Jennifer Blanc-Biehn, who invited her to be co-producer and take on a small role in the feature film The Girl.

That collaboration led to Jordan to four other projects with her production company including starring roles in the features Altered Perception and The Fairy. As if that weren’t enough, Jordan has a few other projects on the side and is producing a movie that will shoot in Pennsylvania.

To top it all off, Jordan came up with the idea for Mindless, a feature film that she will also star in, which starts production on May 18. She reflected on the moment the idea first came to her, saying, “I was actually sitting, waiting for a friend for coffee at Starbucks in Sherman Oaks, off of Ventura. And I was, I guess, being very existential while I was thinking and I was like, ‘What would happen if I couldn’t remember who I was and I had to retrace my steps. Would I leave clues for myself? How would I go about finding out who I was?’”

Along with Blanc-Biehn, they recruited Alyssa Lobit to write the script, which Jordan describes as a “Momento/Side Effects like thriller.” With urging from Blanc-Biehn, she found the perfect co-star in Ben Kurland, who appeared in Academy Award-winning film The Artist.

The project will be a stellar example of Jordan’s ability to wear multiple hats. “I’m one of the producers. I conceptualized it. So the story is mine and I wrote it with Alyssa Lobit and I’m helping provide some of the locations. I helped find some of the funding for it. And I’m part of the whole production process — conception through distribution. It’s hard. It’s really hard but I like it.”

But wait, there’s more. Jordan admitted, “I also do improv still and I dance and I sing and I’m always going… so sleep is nice.” It sounds like it’s going to be a long time before Jordan gets some rest. To stay on top of all of her projects visit her official website and like her on Facebook.