Bob Odenkirk Is Passionate about Fargo 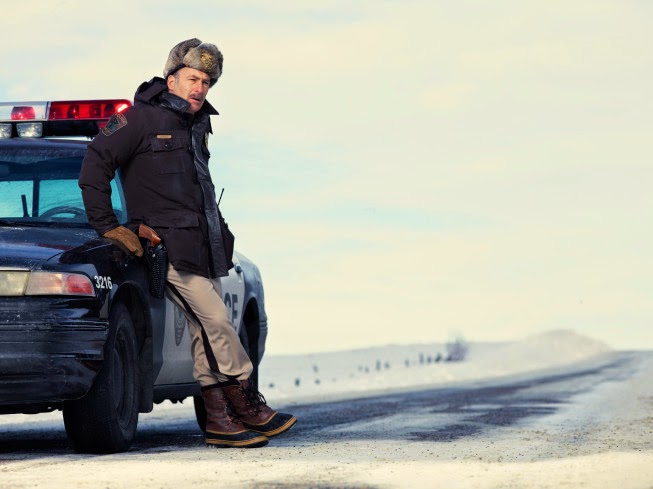 
The first time we saw the Coen Brother’s movie Fargo we had just been to a family reunion in North Dakota. We not only got a good laugh over exactly how accurate those accents were we also knew we had just seen something special — a perfect blend of comedy, drama, darkness and fun. We were nervous when we heard they were attempting a TV version of the film, but a little relieved to hear some of the key players — Billy Bob Thornton, Collin Hanks, and the incomparable Bob Odenkirk. How can you go wrong?

We spoke with Bob during a recent conference call interview, and he, too said he was nervous about what they would do to the movie he also loved, but was pleasantly surprised by page eight of the script to see that they got it right.

It was great to hear the actor’s passion for the project. Before the call even got underway he couldn’t contain his excitement, saying, “I love Fargo. I had so much fun making it and we could all tell we were making something pretty great around, I’d say, week three or four. It’s so nice when it turns out and everyone is hoping that it’ll turn out and working towards that. But the vibe around it was so good and it just got better as we made it, so I’m thrilled that it’s playing well for people.”

Coming off the role of a lifetime, Saul Goodman in the series Breaking Bad, it’s impossible not to ask the actor to compare the experiences. He noted, “The similarities were these are amazing casts of people who are completely professional and grateful to be working in this area. I know I’ve been lucky. I know that this isn’t the norm, so I got to be real careful not to get deluded by these wonderful experiences that I’ve had in the last two years, or four or five years… These casts are veterans. They really know to appreciate good writing because they’ve seen not so good writing.”


He continued, “When they’re on a project with a great original voice and integrity to the work, they are thankful and you see it and you feel it all the time every day. It’s not just like the day they show up. It’s like they show up every day glad to be in something that has quality. And so I’ve been very lucky, but I got to keep that in mind and not get deluded and think and forget that this is just a special case for these great, great projects.”

Although Bob came to mass popularity in Breaking Bad he actually started his career as a writer — a comedy writer to boot — first at SNL and then doing his HBO sketch comedy The Man Show with Bob and David. But he said he is never tempted to re-write or add his own stamp to these dramatic characters he’s been given to play. “It started with Breaking Bad, was getting a script and not attempting to manipulate the words at all. My challenge with Breaking Bad and with Fargo was how do I do this part as written literally word for word? It was my goal and is my goal. How do I make those words come to life and be a character and be natural and what do those words mean?

He added, “I approach these shows purely as an actor and it’s been refreshing and a new way to look at acting. It’s allowed me to be a much better actor than I was when I was constantly messing around with the words because I was either the writer on the project or I felt like it was my job.”

And while both Bill and Saul have added elements of comic relief to the two shows, coming from the comedy world, Bob sometimes has to fight off the urge to be outrageously funny. “It is a conscious effort that I have to make to try to get it to the right place, so that it belongs in the world that I’m playing in and isn’t outsized too big. Sometimes I do feel constrained and I want to be funny. I’ve had actually one or two instances where I asked if I could just do a silly version of the scene and then I just do a really crazy version. I have to get that out of my system and then I can go back to playing it in a more restrained and lower key manner. But I do enjoy doing both and I think one of the fun things about doing a drama is that you can modulate to a very low level your turns and twists and your little spins and you can get a big laugh out of small choices.”

And as for those Minnesotan accents, they got them right, a feat not easily achieved by the actors. He stated, “Everyone in the whole cast from the get go was extremely thoughtful about trying to do a good job with our accents… If you watch videos on YouTube of Minnesotans and the Minnesota accent is that it fluctuates; it comes and goes. It’s not strong all the time. It can be very strong on some words and then it can be gone completely on other words or even a sentence and so that’s a tough one to do. It’s tough to get it right, but I think what we all tried to do is to not push it too hard.”