Colin Hanks Had a Lot of Unlearning To Do for Fargo 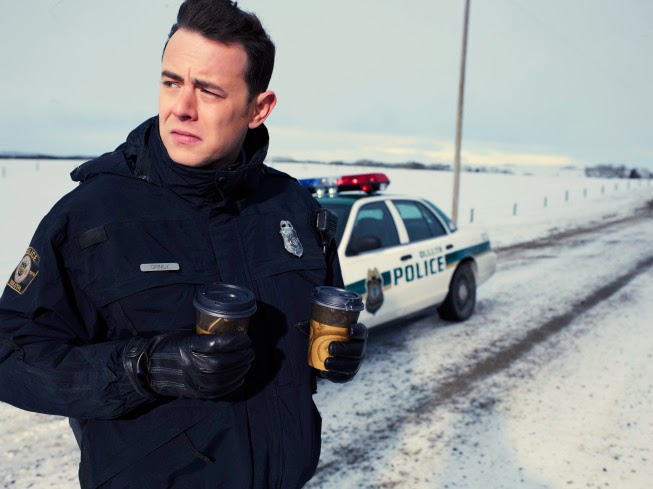 Often times when an actor prepares to take on the role of a police office on a TV show, they do some major research. But in a recent conference call interview, Colin Hanks explained that he didn’t go on ride alongs to get ready to play Gus Grimly on Fargo. In fact, he did just the opposite.

“I sort of specifically did things poorly. You train, if you play enough cops, eventually you say, ‘I know how to hold the weapon. I know how to do this.’ I sort of undid all of that to make Gus look a little bit more out of his element,” acknowledged Hanks.

But playing what he described as “not a good cop, really,” did require one special skill that Hanks had to hone. “The only real preparation I did was work with the dialect coach to try and get a little bit of his accent down,” noted the 36-year-old actor. “We didn’t want to go too big on the accent, but we wanted to make sure that there were some subtle moments in his speech that would indicate he definitely has an accent.”

He may have nailed the Minnesota sing-song sound down, but playing the guy who let Lornea Malvo get away in episode one came with it’s own irritations. As Hanks conceded, “At times it could be pretty frustrating. You try not to judge your characters too much, but there were definitely some moments where I was frustrated. I was frustrated at Gus’ inability to do certain things… and so, that was really something that I sort of leaned on and drew from.”

That aside, Hanks had developed an affection for Fargo's most likable character. “The thing I enjoyed most about Gus was the fact that there was an awareness to him. Oftentimes you see these characters and they know that they're not good, but they're just instantly beat down. But this is something that slowly eats at Gus. He makes this decision to let Malvo go and although technically he does the right thing, it's the wrong thing. It's not something he should have done.”

The ultimate wrath of Gus’ mistake are still to be seen by Fargo fans. But judging from the first few episodes, the bloodbath isn’t going to end anytime soon. Looking back on the moment to let Malvo drive away, Hanks said, “It obviously leads to very bad things.”

And yet, it’s a moment that Hanks is happy his character had, “I like the fact that here was a character that made this mistake and spends his time, even though he doesn’t necessarily want to, atoning for it and trying to fix it. And he fesses up, to a degree, as to what he did and he actively tries to right the wrong. That really appealed to me. That was the initial kernel when I read the pilot. And then, as the show progressed, I kept trying to come back to that regardless of my frustrations of Gus not being able to get his act together, so to speak.”

Beyond that frustration, Hanks has also found that the role and his Fargo experience have been liberating. He admitted, “Sometimes I find that as an actor [the rules of television] can be very constrictive. And this character, but more importantly the job as a whole and the writing, really allowed for, I like to call it, breaths. It allowed for a moment of really being able to sit with a character and see them stew with their decision and see their wheels turning and really become involved in their journey.”

Hanks credited the production process for also helping to free him from the normal confines of working in television. “There wasn’t this incessant cutting from one angle, so here's the coverage, here's the close-up, here's the two-shot and going back and forth. You sort of almost become dizzy from all of the fast editing. And here's a show that really lets it lie, really lets you live with these characters and experience the moments that these characters are having. As an actor to not have that be rushed while you're doing it was great.”

As a result, Hanks observed, it makes for a different viewing experience as well, “I find that this show, ‘Fargo,’ is really more about observing these characters and what they do as opposed to just watching the story. And eventually the characters tell you what's going to happen or tell you how they're feeling or there's that ambiguity there that I really enjoy.”

Observe the unique characters of Fargo every Tuesday night at 10 p.m. EST/9 p.m. Central on FX.

Posted by Pop Culture Passionistas at 11:04 AM