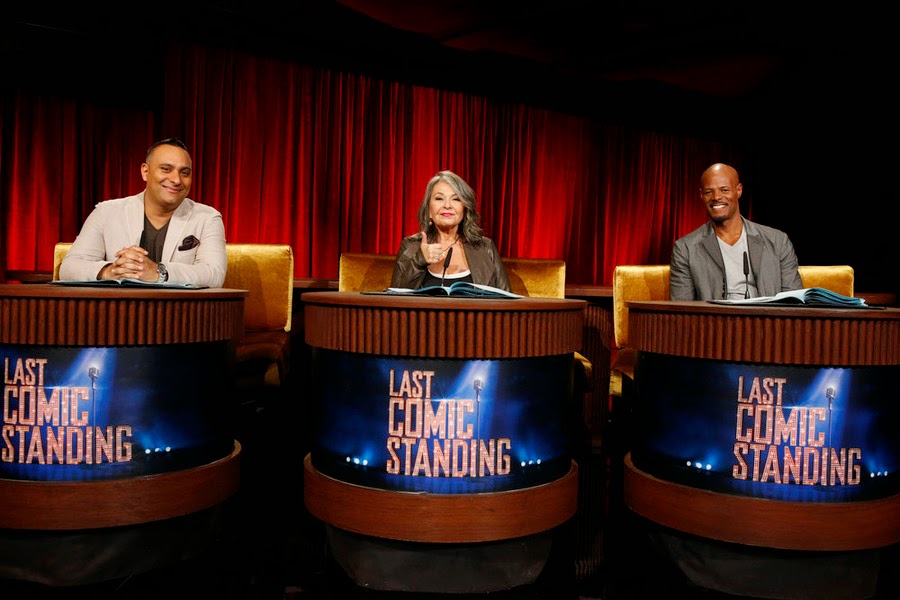 We’ve watched Last Comic Standing since the early seasons with Dat Phan, Ralphie May, Alonzo Bodden and John Heffron and are so happy to hear that after a four-year hiatus, it’s back and better than ever. The new season features Roseanne Barr, Keenen Ivory Wayans and Russell Peters as judges and JB Smoove as host. And with Executive Producers Wanda Sykes and Page Hurwitz at the helm, it’s sure to deliver.

In a recent conference call Roseanne talked about what drew her to be a judge on the show. “I just thought it would be really fun. And when I heard that Keenen Ivory Wayans was one of the judges, I really love him. I like Wanda a lot, too, so I thought it would be fun to work with some really great comics and get right in the middle of stuff that has to do with standup comedy.”

And working with these heavy hitters did not disappoint the four-time Emmy winner. She said of Keenen, “I’m blown away, every week. I’m sitting next to a bodhisattva. I’m sitting next to Keenen Ivory Wayans. That guy, his commentary and the way he sees… He discovered a lot of great performers and comics on his shows and movies… I’m always like, ‘Let Keenen go first.’ And then I go, ‘I agree with Keenen.’ He’s just a brilliant… It’s just amazing.”

Roseanne also lavished praise on her other co-panelist Russell Peters. “I never even heard of the guy, to be honest. And they’re like, ‘This guy is like the Beatles.’ And so I went on YouTube… he’s playing on like 70,000 seat arenas. And is right now kind of in a Russell Brand thing. He’s real new to the United States. And that guy is so funny. It’s like non-stop. He gives feedback like a standup comic — joke, joke, joke. And I mean there’s nothing on earth that he doesn’t have a joke for. It’s amazing. And it made me go, ‘Oh this is so cool to be back in this arena.’”

And Roseanne was not just enlightened to the comedy of Russell Peters during this experience, she also rediscovered the world of standup. She noted, “I was thinking that it was pretty static and kind of boring, actually, over these last few years. But becoming a judge on this show and seeing people who are actually writing jokes that I’ve never heard before, it’s exciting. I’ve never heard these premises in so many of my favorite comics who are competing. It’s very brave. And it’s cool. So that brought me back into comedy.”

She continued, “Keenen and I were talking about it, this is like comedy coming back. It’s like a re-birth of comedy. Not just on this show — but certainly including this show — but all over the place. Yes, there’s a whole different everything. It’s exciting. It’s kind of like punk-rock.”

So what is Roseanne like as a judge? She sums it up in one word, “Intelligent!” She said she doesn’t fit into any other reality judge mold of the nice judge or the mean judge. “I’m just me. I didn’t try to copy somebody else. I’m just me… I just give my honest opinion, as I have done for all these many years when it comes to writing and comedy.”

There are several changes to the format of the show in Season 8. The 100 comedians are handpicked by Sykes and Hurwitz and they are bringing back the challenges. But perhaps the biggest adjustment is that there are no more viewer votes. The three judges alone will select the winner. But Roseanne was quick to point out that the audience still plays a part. “They win because they kill the audience. So the audience is part of it. It’s the laughs they’re getting from the audience, that’s how we judge. But no non-expert opinions are needed. You want people who’ve never acted to vote on the Academy Awards? It’s people who know the craft who should be voting on it. But it is about if they’re getting over and making that audience come out of their seats. Then they’re going to win.”

So if Roseanne Barr back in the 1980s did her Domestic Goddess bit on Last Comic Standing how would she fair?  She modestly stated, “I would’ve won. I did, in fact, win the Denver Laugh Off. And that is what propelled my career. I did a number of other untelevised comedy contests. But I think I would’ve really worked really hard. That’s what I like about these comics because they’re prepared. I wouldn’t become part of any contest unless I was really prepared and thought I could win. And that’s what I think we have here. We’re seeing who’s prepared and who isn’t prepared. And that’s like the most exciting part to me.”

She added, “But, of course, I have to say I would’ve won. Because you have to have that kind of self-confidence being a standup comic. You have to really believe in what you do and that you’re the best at doing what you do. And so we’ve seen a lot of people on this show come in like that and falter. But the ones who want it the most, are the ones who make it.”

Tune into Last Comic Standing tonight at 9 p.m. on NBC.
Posted by Pop Culture Passionistas at 2:00 AM