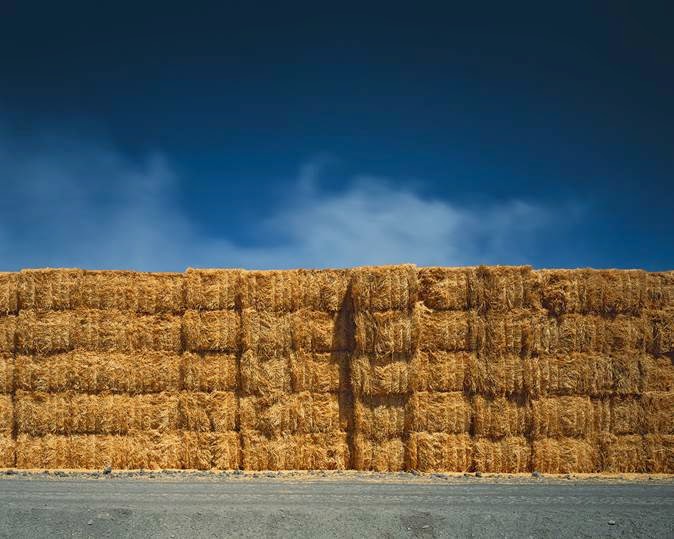 What is it about staring at a horizon that is so calming? Watching the sunset over an ocean. Being mesmerized by the road disappearing straight ahead on a highway. Lying on the grass taking in the blue sky and puffy clouds. Photographer Sparky Campanella set out to explore the relationship between land and sky, man and nature, in his series appropriately called horizon. And through his work he has achieved an unexpected level of tranquil beauty in everyday scenes.

In a recent interview Sparky told us the images “have a calmness to them. They’re quiet and they’re powerful. I like that combination. I was trying to have the biggest impact with minimal and often abstract content. It’s calming. It’s contemplative, but there’s still energy there.”

He began the series one day on the top of a friend’s studio. The roofline of the white stucco building against the cloudy sky caught his attention. He recalled, “I saw this scene that just struck me. It just grabbed me. That’s true of a lot of the horizon work. A lot of times I go out looking for things, driving around, walking around, at a slower pace and just observing. And some things just click.”

This minimalism is something Sparky tries to achieve in all his work. He explained, “I aspire to have minimal content and maximum impact — both conceptual impact and visual impact. I try to make pictures that are beautiful because I want to make stuff that I would want on my own wall. And yet they are not just ornamental but they have layers of conceptual depth to them.”

He went on, “The conceptual side is focused around the relationship between man and nature.” He talks more about this notion on his website saying, “I believe that man and nature can co-exist. horizon manifests my belief through the urban horizon line, a point of reference common to all city dwellers… Our urban landscapes are bounded by the geometric architecture of buildings, rooftops, walls and even passing trucks. My love of both city and country draws me to scenes where man-made and natural complement one another.”

Sparky hopes the horizon series inspires people to appreciate the common sites around them. He said he hopes those who see his work will develop “an appreciation for the beauty that’s all around us. A lot of these shots in the horizon series are pretty mundane scenes — buildings or rooftops or walls — but with the right lighting, at the right time of day and at the right angle they become extraordinary. That’s around us all the time, all day long. If you don’t notice it, you’ve missed a lot of life.”

The artist had advice for people thinking about exploring the field of photography. And it’s all about being authentic. He suggested, “Go out and look at a lot of work — not just photography, but anything — architecture, performance art, anything — and pay attention to what captures you, what resonates with you. And slowly piece together that puzzle of what it is you are drawn to in other people’s work."

He emphasized that having a knowledge of art history is crucial to finding your own voice. “Be worldly. Take art history courses to realize what has come before you and how whatever you’re doing is different from what’s already been said. Does it build on previous ideas? Is it an extension of them or is it just repeating the same thing? And from that, put together what your special niche is. It’s important to have your own look and for people to recognize that.”

Sparky is preparing for his first museum showing this fall at the Crisp Museum at Southeast Missouri State University. He will have 14 of his images in large scale (40” x 50”) all hung in a special way. He described the set up, “All images are exactly divided in half. There’s always a mid-point between nature and manmade. So when they are all hung consistently, this line creates this a virtual horizon line in the space and it’s almost that’s transformative in terms of how calming it is.”

Find out more about Sparky at his website campanella.com.

Posted by Pop Culture Passionistas at 7:52 AM