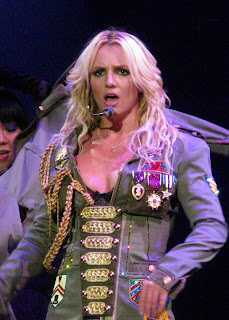 PBS has just launched a 21st century version of the beloved 1970s kids show "The Electric Company," and the new series is going to have a bunch of famous guest-stars, including Tiki Barber, Whoopi Goldberg, and Jimmy Fallon. But can any of the unknowns in the regular cast ever reach the level of fame achieved by original "Electric Company" cast member Morgan Freeman?

In honor of these potential megastars of the future, we salute our favorite actors of kids shows past.

Morgan Freeman: Now
Sure, he went on to drive Miss Daisy, serve time in the "Shawshank Redemption," and train the "Million Dollar Baby," but in our hearts we know he received that recent Kennedy Center honor for his portrayal of Vincent The Vegetable Vampire.


Britney Spears: Then
"The Mickey Mouse Club" of the '50s and '70s launched a few stars, most notably Annette Funicello (of beach movie fame) and Lisa Welchel (who would go on to play Blair on "The Facts Of Life"). But whoever chose the Mousketeers of the '90s was a casting genius; Christina Aguilera, JC Chasez, Ryan Gosling, Keri Russell, and Justin Timberlake were part of the Club. But most importantly, they found a 12-year-old girl with a big voice, Britney Spears, who would spend two years in the Club before becoming a break-out pop star.

Britney Spears: Now
After dominating the charts forever (or so it seemed), Britney had a few years of tragic paparazzi-documented missteps. But Britney seems to be getting her career back on track. Her latest album, "Circus," debuted at #1 on the Billboard chart, and her single "Womanizer" marks her seventh Top 10 hit.


Stacy "Fergie" Ferguson: Then
Think "Saved By The Bell" mixed with "The Monkees," and you've got "Kids Incorporated" - the sitcom about a fictional rock band made up of tweens and teens. Unlike "The Monkees," this group had rotating members -- Kids got booted from the band when puberty hit. Among those unlucky enough to age out of "KI" were future stars Jennifer Love Hewitt and Stacy Ferguson (these days known better as Fergie, Stacy lasted six seasons on the show, longer than any other member of the band). And yes, that was Mario Lopez dancing with the prepubescent actresses in the background for a couple of seasons.

Stacy "Fergie" Ferguson: Now
Ex-castmate Fergie has been luckier in love than the other high-profile Kids. She tied the knot this month with longtime boyfriend Josh Duhamel. Love Hewitt stars in her own hit TV show, "Ghost Whisperer," but these days she's also a tabloid staple, with news of her recently broken engagement and constant debate over whether, at a size 2, she's too heavy for Hollywood. And Mario's still single after splitting from his "Dancing With The Stars" partner, Karina Smirnoff (she's engaged to fellow "DWTS" pro, Maksim Chmerkovskiy).


Deirdre Hall: Then
It may have lasted only one season on TV, but "Electra Woman And Dyna Girl" will live forever in our hearts. For many of us, it offered our first glimpse of female empowerment as embodied in the red-and-yellow leotard-wearing Deidre Hall and Judy Strangis.

Deirdre Hall: Now
While Strangis' star faded away (she made a few guest appearances on TV shows in the '80s), Hall would go on to have one of the most successful careers in the history of daytime soaps. The same year she starred as Electra Woman, she signed on as Marlena Evans on "Days Of Our Lives." Some 33 years later (with a four-year break in the late '80s), Marlena is still the star of the show as the soap counts down the final days of John and Marlena with a "surprise" wedding.


Johnny Whitaker: Then
Johnny Whitaker was already used to being upstaged by the adorably pig-tailed Anissa Jones on TV's "Family Affair." So he didn't seem to mind playing second banana to Billy Barty inside a seaweed suit better known as Sigmund Ooze on "Sigmund And The Sea Monsters."

Johnny Whitaker: Now
Johnny had been acting since he was three, and his transition to adult roles didn't go too smoothly. Addiction and disillusionment, following the tragic death of his "Family Affair" costar Anissa Jones, led to an extended early retirement. Johnny became a missionary and advocate for a new generation of child stars. But the lure of Hollywood can be seductive. Johnny marks his return to acting with the upcoming film "Horrorween."


Paul Reubens: Then
Paul Reubens had a few bit parts in movies and TV shows before he transformed himself into Pee-wee Herman and became a star. After two hit feature films, the sweetly innocent man-child moved to the small screen with "Pee-wee's Playhouse," rounding up his unusual friends (including Phil Hartman, who would go on to fame on "Saturday Night Live" and "NewsRadio," Laurence Fishburne who would become an acclaimed actor, and S. Epatha Merkerson, who would star in "Law And Order").

Paul Reubens: Now
After getting caught doing some especially grown-up things in an adult movie theater, Paul Reubens disappeared from the spotlight. He started to make his way back into the Hollywood scene with roles on "Murphy Brown" and "Dirt." He tried his hand at a game show called "You Don't Know Jack." And he did A LOT of voice-over work (sometimes, it's better to be heard and not seen for a while). But Reubens is finally dusting off the gray flood pants of his Pee-wee suit and hopping on his beloved bike again for the upcoming film "Pee-wee's Playhouse: The Movie."


Levar Burton: Then
LeVar Burton starred as Kunta Kinte in the small-screen adaptation of one of the most powerful books of all time, Alex Haley's "Roots." Perhaps it was his appreciation of literature that led Burton to his next significant work, hosting the educational kids show "Reading Rainbow." Burton appeared from 1983 to 2005 on the PBS program, introducing a generation of kids to the fun and adventure in books.

Levar Burton: Now
While "Star Trek" fans loved his "Next Generation" character Geordi La Forge, Burton wasn't invited to the new "Star Trek" film party on the Enterprise. But LeVar's still working, with a role in the upcoming film "Taken In Broad Daylight."


Ringo Starr: Then
He was a Beatle, we're all clear on that point, right? But Ringo always liked to dabble in acting. He stole the show kicking along the river banks in "A Hard Day's Night." He held his own against Peter Sellers in "The Magic Christian." He grunted his way through "Caveman." But kids too young to know the Beatles will best remember him as the narrator on their favorite train show, "Thomas The Tank Engine And Friends."

Ringo Starr: Now
Ringo hasn't acted in a while, but he keeps putting out CDs. In 2008 he released his 14th studio album ("Liverpool 8"), a compilation disc ("Ringo 5.1: The Surround Sound Collection"), and "Ringo Starr: Live on Tour." No wonder he told his fans he's just too busy to respond to fan mail ever again.


Steve Burns: Then
Steve Burns hosted one of the most popular children's shows of all time, "Blue's Clues." But he wasn't a shoo-in for the part. The self-proclaimed "skate rat" showed up at his audition with long hair and an earring (thinking the role was only the voice of a cartoon), but when they cleaned him up and slipped him into the iconic striped shirt, he became a kids show legend.

Steve Burns: Now
While he was a superstar with the toddler set, Burns was virtually unknown to the non-kid or parent audience. He stuck with the show for seven years before moving on to pursue his other interests. These days Steve's a musician, collaborating with members of the Flaming Lips, and he can be seen in the film "Christmas On Mars," directed by Lips lead singer Wayne Coyne.