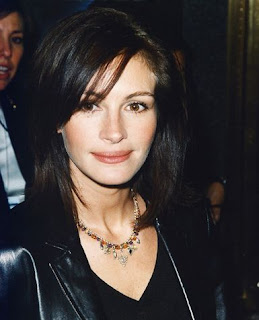 Julia Roberts Julia Roberts' new film "Duplicity" with Clive Owen opens this week. And since she spends the whole movie covering up her past, lying, stealing, and cheating, we thought it only fitting that we expose some of the actress' personal secrets. Of course, none are as covert as her "Duplicity" dealings, but we think you might find them more interesting.


She Once Had a "Foot Assistant"
It's not really as pretentious as it sounds -- only a little. While filming the 1991 movie "Hook," she spent so much time in the air as Tinkerbell that she actually had an assistant whose job was to keep the bottom of her feet clean.

Coretta Scott King Was Her Anonymous Fairy Godmother
In 1967 Coretta Scott King took her children to acting lessons in the home of a white couple in Atlanta. The drama teachers were Julia Roberts' parents, Walter and Betty Lou. When Mrs. MLK heard that Betty Lou was in labor, she secretly paid the hospital bill for her stay, as a way of repaying the Roberts for their kindness toward black children in Georgia. The secret was finally revealed after Coretta's death in 2006.

She Was a Broadway Flop
Julia has had a lot of success in her day. Hit movies, Oscars, Golden Globes, and more. But she was not as triumphant in her Broadway debut. Her performance in "Three Days of Rain" was widely panned, and the play only ran for 70 performances. Recently, she told "Allure" magazine that she'd like to take another stab at the Great White Way. But she said that next time she'd pick an easier play.

She Takes Her Makeup Lying Down
Insisting that it gives her a more relaxed look, Julia has all her movie set makeup applied while she's flat on her back. Sounds like a good excuse for a nap, if you ask us. She also uses a safety pin to separate her lashes when she applies her own mascara -- a real-life detail she brought to her character in "Charlie Wilson's War."

George and Brad Once Paid Her Salary... Not
At the time Julia signed on to the cast of "Ocean's Eleven" she was earning $20 million for movie roles. When Clooney and Pitt found out she had agreed to costar with them, they sent her a card. The note read, "We heard that you get 20 per film." Inside was a $20 bill. Always the jokesters.

She Gave up Helping Animals for Hollywood
Julia loved animals so much as a kid that she wanted to be a vet when she grew up. But then she saw big brother Eric acting and decided to follow in his footsteps. Still, she is quite the equestrian (she did her own riding in "Runaway Bride"), and she has made two PBS specials, "In the Wild: Orangutans with Julia Roberts" and "Wild Horses of Mongolia with Julia Roberts." She gets up close and personal with the animals in both docs.

The Other Roberts Girl
We all know Julia's brother, Eric ("The Pope of Greenwich Village" and "Nobody's Fool"), but what most people don't know is that there's another thespian in the family -- and we're not talking about Eric's daughter, teen star Emma Roberts. Julia's big sis, Lisa Roberts Gillan, is also an actress. Sadly for Lisa, her career has not achieved the $20 million per movie status. In fact, it's mostly achieved the "your sister's a huge star, so we'll put you in her film" status, with some of her biggest roles to date in "Duplicity," "Mona Lisa Smile," and "Runaway Bride."

Runaway Bride
Though Julia seems settled and happy with Danny Moder, her husband of seven years, she was once a little bit of a commitment-phobe. After filming "Steel Magnolias" she was briefly engaged to costar Dylan McDermott. Then while making "Flatliners," she fell for another costar, Kiefer Sutherland, once again getting engaged and this time leaving Kiefer just days before the nuptials (to be fair, he cheated on her with a stripper, so her running was justified). Then she actually took the plunge with singer Lyle Lovett, after dating only three weeks. They were separated in less than two years. Along the way, there were also relationships with Liam Neeson, Daniel Day-Lewis, Matthew Perry, and Jason Patric, but Julia retired her running shoes when she met Danny on the set of "The Mexican."

She Keeps Good Company
In 2001 Julia became one of an elite group of five actresses when she won the Academy Award, BAFTA Award, Golden Globe Award, and SAG Award for the same performance: her title role in "Erin Brockovich." The other women in this exclusive club include Renée Zellweger for "Cold Mountain," Reese Witherspoon for "Walk the Line," Helen Mirren for "The Queen," and Jennifer Hudson for "Dreamgirls."

Once a Cover Girl, Always a Cover Girl
In 1990 Julia was the first actress to appear on the cover of "Vogue" (until then, the magazine had only featured models). (Cher had made several cover appearances in the - 70s, but she was still known as a singer at the time). And for years "GQ" claimed that she was the first woman to ever grace their cover. The magazine itself took back the claim, remembering a Carol Channing cover in 1964 (guess Julia was just the first PRETTY woman). Julia has also been named one of "People" magazine's "50 Most Beautiful People in the World" 11 times, and we're guessing after seeing her March 2009 "Allure" cover, that number will most likely increase.