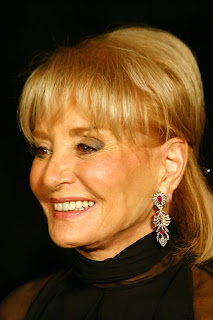 We understand that the older a person gets, the harder it is to embrace new technology. Heck, our dad’s never been able to program a VCR, and, frankly, we're Facebook-phobic. So we’re very impressed by the number of older celebrities celebrating the latest craze. That's right: Twitter.

Sure, Ashton Kutcher has the hang of it — he’s, like, 12. But when 79-year-old Barbara Walters announced on "The View" that she was losing her "Twitter virginity"… live… we were enthralled. She already has more than 100,000 followers (and counting!).

Have other more-mature celebs joined the tweeting revolution too? The answer — in 140 characters or less — is absolutely yes.

William Shatner is a self-promotion genius. He uses his Twitter account to plug his MySpace page and YouTube postings. And if that weren't enough, he has a separate profile for his alter ego, The Negotiator. Seems Priceline wants in on a little bit of that BillShat mojo. Still, every once in a while, he gets personal, calling out George Takei yet again in their longstanding public spat and paying respects to Ricardo Montalban, with whom he worked in "Star Trek II: The Wrath of Khan."

We used to think it’d be cool to be George Clooney, but lately we've set our sights on the ultimate celebrity with the most killer lifestyle: Richard Branson. The Virgin CEO is rich, has an incredibly understanding wife who doesn't mind him kite-surfing with naked models on his back, travels endlessly, sails, flies, and is launching his own public space program. The dude knows how to live, and he knows how to tweet. His account is full of tales of yachting accidents, Formula One races, run-ins with "The Hoff," and his latest video project, "PitchTV," which gives young entrepreneurs exposure and furthers their dreams of flying in the shoes of the most swinging businessman around.

Unlike his fellow Twitterers who seem to stick to a theme, Cleese meanders around quite a bit. He dishes Monty Python trivia (it turns out Michael Palin's middle name is Edward and he has an asteroid named after him called Sarah). He jokes that Terry Gilliam invented time travel, which they used to venture into the future to watch YouTube. And he used it to clear up any nasty divorce and dating rumors. "Don't believe anything you read in the papers," warned Cleese. Apparently, Twitter is a far more reliable news source.

Yoko's page is pretty much what you'd expect: a forum to speak about important causes, a place to push her art exhibits and new music, occasional mentions of The Beatles, and a few Ono-esque platitudes like, "Remember, we are all water in the same ocean." But we did learn something we didn't know about Yoko: she loves to dance. And not only does she say that in her Twitter bio, but occasionally she'll simply tweet, "dancing." Imagine.

John Lithgow might not have the most followers (around 10,000), but he knows how to engage the ones he has. As he jets back and forth from New York to Los Angeles, he often throws out little guessing games for his fans. Our favorite: "Mid-air, NY bound. Who's 3 seats away? Good friend; with me in Buckaroo Banzai; on B'way same time as Scoundrels; just as tall; specs. ???" He congratulated the fans who guessed "JG." Jeff Goldblum could not be reached via Twitter to confirm or deny.

John McCain seems to be using Twitter the way he used the Presidential debates of 2008: as a forum to drop quick quips at Barack Obama. And while McCain's 500,000-plus followers is an impressive mark, it's about half of Obama's supporting force. Falling short of the margin once again.

The former Bush administration Deputy Chief of Staff may have had to resign in 2007, but he's going strong on Twitter. Rove uses the forum to try to clear the air about interrogation memos and publicize his many appearances on Fox shows like "Fox & Friends," "Hannity," and "The O'Reilly Factor."