Fill Us with "Glee" 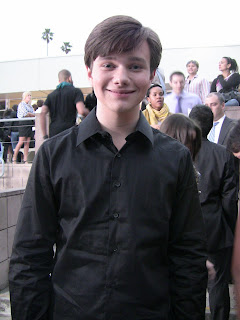 You can keep your "Mad Men" and your "Breaking Bad." The best new show on television is "Glee." The name says it all. A joyous romp with singing and dancing. The new CW show does everything right that "Cop Rock" and "VEGAS" got wrong. The singing, is all justified (even if it takes a need to loosen up the football team to get a pack of shoulder pad wearing galoots to do the "Single Ladies" number on the field). And the relationships are complex. When was the last time you watched a show where a blue collar dad not only accepted his 16-year-old son's homosexuality but thanked the kid for telling him. It might sound corny but it's actually not. There's prime time soap opera worthy drama (the cheerleader who's not telling her boyfriend that her unborn child is his best friend's); two of the funniest actors in comedy history (Stephen Tobolowsky and Jane Lynch); and some of the most talented singers we've ever heard in one place this side of Broadway (take that "American Idol."). Already picked up for TWO SEASONS, the show will bring a little slice of happiness into your house. All we are saying is give "Glee" a chance.