The Cast of "thirtysomething:" Then and Now 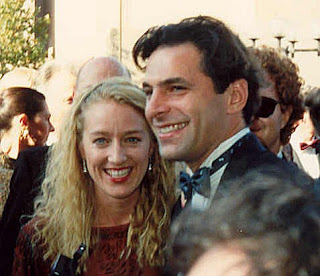 Quite simply, the hit ABC show "thirtysomething" changed the face of TV as we know it. The ensemble-based series kicked off a new TV genre about the everyday lives of a group of attractive friends. While it was inspired by the 1983 film "The Big Chill," we think that without "thirtysomething" there'd be no "Friends," no "Seinfeld," and no "How I Met Your Mother."

When it debuted in 1987, the Boomers of "thirtysomething," who spent the '60s fighting for peace and love, now found themselves longing for peace and quiet in their hectic yuppie lives. Creators Marshall Herskovitz and Edward Zwick (who also brought us the beloved series "My So-Called Life" and "Once and Again") invited us into a world we'd never before seen on TV. It was unlike any other prime-time drama in that, for once, we could relate to these people. They weren't oil magnates and murderous vultures; they were friends, family, business partners, and spouses. They were ad men, teachers, artists, and stay-at-home moms, with the same problems we all faced.

At long last, the first season of the landmark series is now available on DVD. We pray that the other three seasons aren't too far behind. Until then, here's a look at the stars of "thirtysomething," then and now.

Ken Olin played Michael Steadman, the rock of the "thirtysomething" universe. Much of the show's action centered in his home or office, as the former hippie struggled with his newfound yuppie life. Though Olin had already been a series regular on a few TV shows ("Hill Street Blues," "Falcon Crest," and "Bay City Blues"), the part of Michael put him permanently on the TV map.

Olin has worked continually in TV since the end of "thirtysomething." First there was 1996's "EZ Streets," then came 1998's "L.A. Doctors," and his brief turn on "Alias" in 2002. But it's the role of David Caplan on "Brothers & Sisters" that has brought him again to the forefront of public consciousness. Still, since leaving Michael Steadman behind, Olin has found most of his successes on the other side of the camera, as director on "Brothers & Sisters," "Alias," "The West Wing," and other shows.

Mel Harris' Hope Steadman was an ex-hippie feminist in constant moral turmoil over her choice to forgo a career to raise her kids. In all honesty, she was always a little too whiny for our taste. After all, she had a hot husband, a beautiful little baby, a charming house, and a bunch of very loyal friends, yet she still managed to complain. The role of the unfulfilled Hope was the big break for Harris, who prior to "thirtysomething" had been a contestant on "The $100,000 Pyramid" and did a handful of single episode roles on TV shows like "M*A*SH" and "Rags to Riches."

Most recently, Mel has had small parts in Eddie Murphy's "Imagine That" and the Alfred Molina straight-to-DVD thriller "The Lodger" after doing a string of guest spots on "CSI: NY," "House M.D.," and "The West Wing." Harris was also in the 2007 series "Saints & Sinners," a modern-day Romeo and Juliet telenovela (she played Julia's mom) that aired on MyNetworkTV. And while her TV marriage to Michael Steadman seemed solid as a rock, her real love life has not been as consistent. Her fifth marriage ended in 2006.

Timothy Busfield got his start with a bit part in Bill Murray's "Stripes" and was then cast as Arnold Poindexter in "Revenge of the Nerds." He moved to TV after that, playing the son of "Trapper John, M.D" before being cast on "thirtysomething." Elliot Weston, whose infidelities caused the decay of his marriage to Nancy, was the fun-loving partner to the buttoned-up Michael. Busfield's Emmy-winning turn as Elliot opened the door wide for his future success.

Post-"thirtysomething," Timothy went back to the big screen for such films as "Sneakers," "Little Big League," and "Quiz Show" before returning to TV on "The Byrds of Paradise" and "Champs." But his career got its biggest boost on "The West Wing," with his turn as White House correspondent Danny Concannon. And while we loved him on "Studio 60 on the Sunset Strip," that show lasted only one season. Most recently, he's made a few guest appearances on "Entourage," but these days he's more often found behind the camera, producing "Without a Trace" and "Ed," and directing episodes of "Lie to Me," "Lipstick Jungle," and "Las Vegas," among many others.

Patricia Wettig's "thirtysomething" character Nancy Krieger Weston was married to Elliot, but in real life Wettig was married to co-star Ken Olin. And while she had a recurring role on "St. Elsewhere" before "thirtysomething," the artist and stay-at-home mom Nancy was her first lead on a series. She won three Emmy Awards and a Golden Globe for her performance. In between seasons of "thirtysomething," she also starred in the 1991 film "City Slickers," playing Billy Crystal's wife.

After "thirtysomething," Patricia made a string of made-for-TV movies, including "The Langoliers" and "Parallel Lives," before settling back into an episodic show, "Courthouse," and then on to "L.A. Doctors" and "Alias." Her next gig was a recurring role as the evil and manipulative Vice-President Caroline Reynolds on "Prison Break" and her current role is the even more evil and manipulative mistress-turned-family-business-owner Holly Harper on "Brothers & Sisters," alongside TV love interest and real-life hubby Ken Olin (whose marriage to Patricia is still going strong after 27 years).

Melanie Mayron won an Emmy for playing Melissa Steadman, Michael's cousin and Gary's ex-girlfriend, the photographer who epitomized the perpetual struggling artist and single girl. Before "thirtysomething," Melanie had been acting for 13 years, including the 1976 movie "Car Wash," 1978's "Girlfriends," and three episodes of "Rhoda," playing Brenda Morgenstern's best friend. But it was "thirtysomething" that finally got her the recognition she deserved as both an actress and director (she made her debut behind the lens on the show).

After "thirtysomething," Melanie continued to do guest spots on such TV shows as "Lois & Clark," "Nash Bridges," "Mad About You," and "Lipstick Jungle," but she's found most of her success behind the scenes. She's directed movies, including "The Baby-Sitters Club" and "Toothless" with Kirstie Alley, and numerous TV shows: "In Treatment," "Dawson's Creek," "Ed," "90210," "Greek," "Drop Dead Diva," and "The Naked Brothers Band." Still a single girl but now a mother of twins, Melanie developed with her chemist dad a line of diaper creams and baby skin care products called "Mayron's Good Baby."

Polly Draper, before becoming a star on "thirtysomething," had done quite a bit of off-Broadway theater and had won small parts in a few films ("Making Mr. Right" and "The Pick-Up Artist"). But her real-life career took off with her role as the work-obsessed Ellyn Warren, Hope's best friend and the consummate '80s businesswoman fighting her way up the corporate ladder.

In the years after "thirtysomething," Polly continued with TV movies (Danielle Steel's "Heartbeat" and "Broken Promises: Taking Emily Back"), TV guest spots ("The Larry Sanders Show" and "Gideon's Crossing"), and films ("Too Young to Marry" and "A Million to Juan"). She also made her screenwriting debut with "The Tic Code" about her husband's struggle with Tourette's syndrome. But her most notable accomplishment since "thirtysomething" has been as creator, writer, executive producer, and director of Nickelodeon's hit TV series "The Naked Brothers Band." The mockumentary-style show, parodying a tween rock band, stars her sons, Nat and Alex Wolff, and her niece, Jesse Draper.

Peter Horton's Gary Shepherd was the heartthrob of the "thirtysomething" gang. He was the young, single, free-spirited English literature professor, who perpetually acted twentysomething. But before Peter was cast as the yuppie Peter Pan, he did numerous guest spots on such shows as "Dallas," "The White Shadow," and "Eight Is Enough," and he starred in the short-lived drama "Seven Brides for Seven Brothers."

After "thirtysomething" ended, Peter starred in "The Geena Davis Show" and "Brimstone" and made guest appearances on "Brothers & Sisters" and "In Treatment," among others. But Peter's biggest success has come from producing TV shows, including "Dirty Sexy Money," "Grey's Anatomy," and "Brimstone," as well as directing episodes of "The Philanthropist," "The Shield," "Once and Again," and many more.

Posted by Pop Culture Passionistas at 10:02 AM