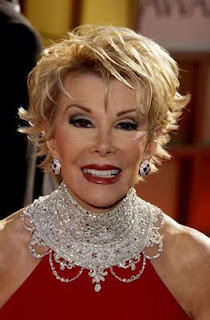 Bio Channel's "Celebrity Ghost Stories" premiered this week and we have become instant fans. While we're a little too cowardly to watch TV's haunted happenings on a regular basis, we check in occasionally with a few of the myriad of shows about the spirit world. We are intrigued by the paranormal, but Sonya Fitzpatrick's "Pet Psychic" is more our speed. Still, we couldn’t get enough of the "Celebrity Paranormal Project" where the B-list stars were left overnight in an eerie location with some heat sensors and overactive imaginations. So when we heard there was another star-studded ghost show, we had to tune in. And we were not disappointed.

Our favorite story from episode one is Joan River's recounting of her New York apartment and the ghost, Mrs. Spencer, who would not rest until her portrait was re-hung in its rightful place in the entry hall. And it wasn't just the comedian who was confronted by this spirit, allegedly the niece of J.P. Morgan. Everyone in the building had encounters and they all were willing to open their doors in the middle of the night to a voodoo priestess to cleanse the building. The QVC jewelry maven still gets friendly visits from the spirit every night at 3:00 am, over 20 years after making peace with the poltergeist. She said, "We’re friends. It’s nice to know I have Mrs. Spencer to say good evening to every night."

But will Mrs. Spencer be as kind to new owners? Joan allegedly put her haunted penthouse on the market this summer for $25 million. To date there have been no reports of a sale, and we're not sure if Rivers had to tell prospective buyers about the paranormal activity under full disclosure laws.

Posted by Pop Culture Passionistas at 11:10 AM