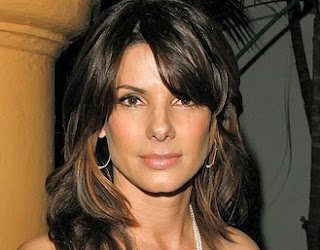 Sandra Bullock is in the news, but not to promote a movie. She and her hubby, Jesse James, are in the middle of a knock down, drag out custody battle with his ex-wife over his daughter Sunny. The girl has been living with the couple full-time, while mommy Janine spent a little time in jail. Sandy's pretty good at keeping her private life private. In fact, few people had heard about the little girl, and that Sandy basically has been her full-time mom, until Janine decided to go on the "Today Show" to do a little mudslingling.

So we thought we'd look to find some other things we didn't know about "The Proposal" actress. Did you know her mother was a German opera singer, her dad was a Pentagon contractor, and her grandfather was a rocket scientist? Or that she lived in Europe until she was 12 and sang in a children's opera choir at Staatstheater Nuremberg? Read on to learn more fun facts about Sandra Bullock.


She Got Her Start on TV
Sandra's big break was positively bionic. Remember the 1989 made-for-TV movie "Bionic Showdown: The Six Million Dollar Man and the Bionic Woman"? Steve Austin and Jaime Sommers teamed up with the help of some cyborg newbies to battle a bionic bad guy. Who played their technologically enhanced assistant? None other than TV first-timer Sandra Bullock. Sandra then went on to the TV version of the successful film "Working Girl" as Tess McGill, the part created by Melanie Griffith for the big screen.

She Won't Sell Her First Car
Sandra Bullock, one of Hollywood's highest paid actresses, drives a 15-year-old car. Granted, it's a BMW, but still. Actually, the story is quite sweet. After she got one of her first big paychecks (we're guessing for "Speed," based on the vehicle's age) she bought her mom a black BMW as a Christmas present. Her mom passed away in 2000, and when Sandra learned her dad was planning to sell the car, she bought it back as a memento of her mom. She still drives it when she's home in Austin, Texas.

She's Extremely Charitable
Sandra's been known to donate huge sums of money to worthwhile charities. It's been reported that she wrote a personal check to the Red Cross for $1 million after 9/11 and another of the same sum after the 2004 tsunami in Indonesia. Just last month she was inducted into the Hall of Fame at New Orleans' Warren Easton High School, where she's donated hundreds of thousands of dollars to help rebuild the facility and the lives of its children since Hurricane Katrina in 2005.

Ellen DeGeneres Ruined Her Wedding... Almost
When Sandra and Jesse James were secretly engaged in October of 2004, Sandy began making plans. One big detail was where to have the wedding. Then she found the perfect spot, a Tuscan-style estate on the coast of California. She spoke to the family and made the arrangements. She booked hotel rooms for the guests and put all the other necessary plans in place until one day she found out the house had been sold... to Ellen Degeneres! Ellen, of course, had no idea and even told Sandra later that she would have let them get married there had she known. No love lost, Sandy and Jesse found another place and then invited 270 friends (including Hugh Grant, William Shatner, Jamie Lee Curtis, and Keanu Reeves) who thought they were coming to a BBQ/birthday party and ended up at a wedding instead. Ellen wasn't there, but her DJ, Tony Okungbowa, played the tunes.

She Tried to be a "Million Dollar Baby"
Long before Hilary Swank played Maggie Fitzgerald in "Million Dollar Baby," Sandra Bullock discovered the F.X. Toole short story and tried to get the film produced with her in the lead. The story goes that no studio was interested in a movie about a female boxer. It wouldn't sell. But somehow Clint Eastwood managed to convince them it would. The 2004 film starring Clint, Hilary, and Morgan Freeman won Oscars for all three stars (Clint for directing and producing, and Hilary and Morgan for acting). But Sandy ended up just fine. She went on to appear in "Crash." Although the actress didn't get a personal Oscar, the film won Best Picture in 2006 and the ensemble took home Outstanding Performance by a Cast at the Screen Actors Guild awards.

She's Accident Prone
Sandra's has had her share of accidents, some serious, some not so much. She actually survived both a plane crash in 2000 (the chartered jet she was on hit a snow bank at the Jackson Hole airport, tearing off the nose gear and damaging the wings) and a head-on collision in 2008 (she was in Gloucester, Massachusetts, filming "The Proposal," when a drunk driver swerved into her lane). Miraculously, there were no injuries in either incident. However, Sandy wasn't so lucky as a kid. She had her nose broken by an elbow to the face as her sister tried to open the garage door, and fell into a lake while hopping from rock to rock, cutting her head and leaving a scar above her left eye.

She's a Singer-Songwriter
Well, she was a singer-songwriter, ONCE. In one of her early films, "The Thing Called Love," a story about a group of young performers in Nashville, Sandra played country wanna-be Linda Lue Linden and sang her own song, "Heaven Knocking on My Door." And although the German opera singer's daughter's performance was charming, that's the closest she'll come to being in a musical. She says she hates singing and dancing in films and refuses to go there. Plus, even she admits singing is not her strength.

She Was Destined to Play Harper Lee
Sometimes a role is just made for an actress, as was the case with Sandra and "To Kill a Mockingbird" author Harper Lee. When director Bennett Miller was casting his 2005 film "Capote," which chronicled the events that produced Truman Capote's nonfiction classic, "In Cold Blood," he considered Sandra for the part of Lee, but chose Catherine Keener instead. However, director Douglas McGrath quickly snatched up Bullock for his 2006 version of the "In Cold Blood" story, "Infamous," starring Toby Jones.

Dogs are Her Best Friends. Horses, Not So Much
It's not that she dislikes horses; it's just that she found out while filming "Two If by Sea" that she's extremely allergic to them. Luckily for the animal lover, she has no such reaction to dogs. She owns two chihuahuas, the two-legged Ruby and the three-legged Poppy. She's so over-the-top about her pets that she even designed special seat belts to keep them safe on car rides. Her affection for dogs made her instant friends with her "Proposal" co-star, animal activist Betty White. Sandra greeted her on White's first day of shooting with a dog book and a rug with a dog on it. BFF.