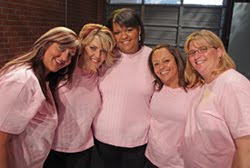 This weekend we sank our teeth into a big, juicy reality show we had never sampled before called “DietTribe.” We had heard about the series, which wrapped up its sophomore season on Friday night, but we'd never taken the time to watch the show about a group of robust friends who joined forces to lose weight together. And in order to be prepared for the finale, we gorged ourselves on an Internet feast of this cycle’s previous episodes. But before we indulged in the docudrama delicacy, we found ourselves pondering the moral question we’d asked ourselves before. Was this going to be a good-hearted series or another show looking to make a buck on a person with a problem?

We have to admit that back in 2004, when we heard the name of the new reality series "The Biggest Loser," we were appalled. That fine line between showing real people be themselves vs. exploiting folks with serious issues, was obviously being crossed. The name said it all. Still, we had to watch. We approached it cautiously and with a certain air of superiority — the way we do the Miss America Pageant every year. "We're better than this, but we just need to see for ourselves how appalling it really is."

Frankly, we were shocked. The atmosphere at the Ranch was supportive. The goal was to help people who felt they had totally lost control of their lives, not to mention their physical well being, get a second chance. And for many contestants it was their last chance to actually live to a ripe old age and see their children grow. Eight seasons later and we've watched the "Losers" (the biggest and smallest) drop pounds, regain self confidence, become fitness gurus themselves, and pass along the promise of a happier, healthier life to the masses.

We were happy to say that “DietTribe” lived up to the standard set by “The Biggest Loser.” The women’s goals were realistically set — lose 35-to-50 pounds in 120 days (just three or four pounds a week). The journey was emotional: friendships grew stronger, deep feelings were explored, and new standards for healthy living were set. And as each woman finished a finale-worthy triathlon that just months before had seemed impossible, you could tell that their lives had changed, for the better, forever.

Maybe these weight-loss reality shows aren't that bad. We loved "Dance Your Ass Off," too. When the news broke about the “Dancing with the Stars” meets “The Biggest Loser” competition show, the concept seemed outrageously exploitative, and we were SURE this time we wouldn’t get sucked in. WRONG.  Not only did the 12 contestants lose a combined total of over 300 pounds, they learned some fancy footwork along the way.

Still, there’s one show that tends to dip its big toe in the waters of questionable taste: VH1’s “Celebrity Fit Club.” The bulky D-lister melodrama has promoted the bad behavior of stars like the troubled Willie Aames, the rehab-bound Jeff Conaway, and the very, very angry Dustin Diamond for the sake of a good has-been meltdown. And we can only imagine who will snap first when the show marks its Season 7 debut. Among the contenders are K-Fed, his ex-baby mama Shar Jackson, Skid Row’s Sebastian Bach, former "Baywatch" hottie Nicole Eggert, "Project Runway" winner Jay McCarroll, and the poster boy of reality TV train wrecks, Bobby Brown. Yes, our money’s on Bobby, too.