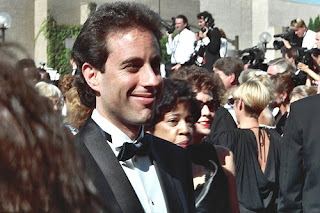 This year marked the 20th anniversary of the debut of "The Seinfeld Chronicles," the pilot for the legendary NBC comedy "Seinfeld." We miss the four friends' show about nothing and can't believe how great it's been to seem them reunite on HBO's "Curb Your Enthusiasm" with "Seinfeld" co-creator, Larry David. So in honor of last night's final episode of "Seinfeld" on "Curb" we look back at the groundbreaking show's enduring catchphrases and check to see what the stars are up to now.

Jerry Seinfeld as Jerry Seinfeld
Jerry Seinfeld, co-creator and star of "Seinfeld," was the series' centerpiece. Most of the episodes took place in Jerry's apartment and involved his friends, Elaine, Kramer, and George as they did the mundane things we all do, such as wait impatiently for a table at a Chinese restaurant, buy a wedding gift for a friend, or try to get a bad smell out of a car. These days Jerry isn't worrying about that kind of minutiae. After "Seinfeld" went off the air, he laid low for a while. Then he returned to stand-up, did some high-profile commercial work (Apple and AmEx), made some TV show appearances ("SNL," "The Daily Show," and "30 Rock"), and starred in and co-wrote the animated film "The Bee Movie."


Jason Alexander as George Costanza
George was Jerry's short, insecure, bald (and no, we're not "baldists"), whiny, and notoriously lazy best friend. He got a job "working" for the New York Yankees (because he did the opposite of what his instincts told him to do), dated lots of women way beyond his level, and frequently used the pseudonym Art Vandelay to get out of tight spots. The self-described "Lord of the Idiots" was loosely based on series co-creator Larry David ("Curb Your Enthusiasm") and became the poster child for neurotic commitment phobes worldwide.

After the show ended, Jason Alexander was the first cast member to suffer "The Seinfeld Curse" (the inability of the show's alumni to star in a sitcom lasting more than one season) with the quickly cancelled "Bob Patterson" and "Listen Up!" He was, however, much more successful on Bravo's "Celebrity Poker Showdown": he appeared twice and won the final table during Season 8, taking home $500,000 for the United Way of New Orleans. He currently has four projects slated for release in 2009, including "Rock Slyde" with Andy Dick and "Seinfeld" co-star Patrick Warburton.

FAVORITE CATCHPHRASE: "Double-dipper"
Admit it. Can you EVER eat chips and dip without hearing George Costanza in your head? If you were a double-dipper at any point in the past, you swiftly broke the habit after the episode where George gets caught at a wake going in for seconds with the same chip. It's "like putting your whole mouth right in the dip."


Julia Louis-Dreyfus as Elaine Benes
Elaine, Jerry's ex-girlfriend-turned-best friend, spent her time bouncing from one bad man to the next, trying to find one who was "Spongeworthy," sticking her foot in her mouth, and dancing like "a full-bodied dry heave set to music."

In the years after "Seinfeld," Julia Louis-Dreyfus was the first castmember to break "the curse" with her successful sitcom "The New Adventures of Old Christine," which has been on the air for four seasons and counting.

FAVORITE CATCHPHRASE: "Yada, yada, yada"
Elaine and the rest of the "Seinfeld" show would yada, yada, yada over the less-interesting details of their stories. For example, Jerry Seinfeld had a TV show, it was about him and three friends, yada, yada, yada, and it became a pop-culture phenomenon.


Michael Richards as Cosmo Kramer
Kramer was the quintessential wacky sitcom neighbor. He always entered a room with a sliding start, constantly had outlandish schemes for making a buck (like a coffee table book about coffee tables, complete with folding legs), and had a penchant for Cuban cigars.

After the show ended, Richards came head-to-head with "The Seinfeld Curse" as his sitcom, "The Michael Richards Show," lasted less than one season. He then returned to his stand-up roots, but he ran into even bigger trouble after shouting racial slurs to a heckler at a comedy gig. Aside from a small voice-over role in Jerry's 2007 animated film "Bee Movie," Richards has not acted since. His appearance with the rest of the "Seinfeld" cast on "Curb Your Enthusiasm" this fall will be his first onscreen role since 2000.

FAVORITE CATCHPHRASE: "These pretzels are making me thirsty."
Kramer had many odd jobs throughout the course of the series (from department-store Santa to police line-up decoy) but really he was a struggling actor. In one of his few acting gigs, he had one line in a Woody Allen film: "These pretzels are making me thirsty." The four friends started using the phrase when one of them was feeling irritated or nervous, and it became one of the show's first famous sayings to catch on with fans.


Wayne Knight as Newman
Newman is to "Seinfeld" as George Martin is to the Beatles. The fifth castmate made his first appearance in Season 3 and was in 46 episodes over the next seven years (more than any other secondary character). The mailman Newman served as Jerry's archenemy, and he spent his time onscreen trying to make Jerry's life miserable (and helping Kramer with his get-rich-quick schemes). While on "Seinfeld," Wayne Knight appeared in two other TV shows, "3rd Rock From the Sun" and "Against the Grain." After Jerry and the gang called it quits, Wayne began doing mostly voice-over work, including the WB animated series "Xiaolin Showdown" and Nickelodeon's "Catscratch" as well as such animated films as "Kung Fu Panda" and "Toy Story 2."

FAVORITE CATCHPHRASE: "Hello, Jerry"
Each time Newman walked into a room, he would say to Jerry in a sickeningly sweet, fake-happy voice, "Hello, Jerry." To which Jerry, who considered Newman pure evil, would always flare his nostrils and reply in a disdainful tone, "Hello, Newman."


Patrick Warburton as David Puddy
Elaine's on-again, off-again indifferent boyfriend David Puddy was such a powerful, memorable character that it's hard to believe he was actually on only ten episodes. The auto mechanic with strong religious convictions often painted his body for New Jersey Devils' games and loved him some Arby's and high-fives. After the series ended, Patrick went on to have a very successful film and TV career, which has included voicing animated characters in "Buzz Lightyear of Star Command," "Kim Possible," and "Space Chimps"; appearing in several successful sitcoms, including "News Radio," "The Tick," "Less Than Perfect," and "Rules of Engagement"; and making the movies "The Dish" and "Get Smart." He's also been the voice of Joe Swanson on "Family Guy" for a decade and has two movies coming out this year, including "Rock Slyde" with Andy Dick and "Seinfeld" co-star Jason Alexander.

FAVORITE CATCHPHRASE: "The Move"
In the first episode featuring Puddy, Elaine tells Jerry that her new boyfriend did "the move" while they were in bed together, a maneuver Jerry had described to Puddy when he was dating Elaine. An annoyed Jerry said he wanted to prohibit Puddy from using HIS move any more, but Elaine convinced him it was OK.